HARBINGER RENEGADE started out amazing and maintained that consistency throughout the first four-issue story arc. The first HARBINGER series (written by Joshua Dysart) was, in my opinion, the very best of Valiant’s return to comics publishing.  I also called it the best re-boot series of 2012.

Now, I’m giving serious consideration to nominating HARBINGER RENEGADE for the new RINGO AWARDS (on the fan ballot, see previous articles on the award). The timing couldn’t be better to review the first story arc, considering what else is happening this week. On New Comic Wednesday, HARBINGER RENEGADE #5 is released, beginning a new story arc that leads into the upcoming HARBINGER WARS II. Issue #5 also includes the death of a series character, but let’s not get melodramatic just yet - - let’s talk about the book so far.

What makes HARBINGER and HARBINGER RENEGADE a special read for me is how it deals with several issues and situations:

The trade paperback (a bargain at $9.99) is a perfect jumping-on point for new readers.  The three-page prologue that opens Issue #1 does a clear and concise job of summarizing the story so far.

At the conclusion of the first series, the Renegades broke up following the death of Flamingo. The team succeeded in busting up the Harbinger Foundation of Toyo Harada, but that victory came at a costly price to all of them. Zephyr and @x were the only two members still active and working hard to protect and prevent harm to other psiots.

A further unforeseen consequence of the Renegades making all of Harada’s secrets public, all the names of potential psiots are common knowledge. It doesn’t take long before the NSA, other agencies, and independent rebel groups of psiots try to apprehend and recruit in order to activate their psiot powers for their own purposes.  The Renegades team needs to get back together to try and undo the damage, and most of the first story arc is dedicated to detailing those efforts to reform, led by (who else?) Zephyr and @x.

I’m not going to spoil your reading pleasure by re-capping everything that happens here. It would also require an extremely long review.  I just want to bullet-point a few of the high points for me. 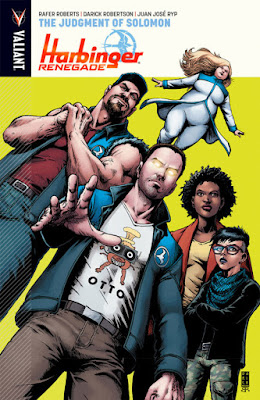 Which brings us to the promotion for the upcoming HARBINGER RENEGADE #5, the new story arc about to debut amidst a lot of hype about the death of a hero.  Who might it be?  I’ve got some ideas, even though I have an advance release copy and could take a peek. That would be unfair. Think about the team and who the weakest member is.  There are actually two, one male and one female. I could see either one falling in a real battle. They would both have an impact on the team—but I believe one of them would have a devastating effect on how the team functions. However, in the first series there was a death and it was one of the stronger members, Flamingo, who was killed in battle. Her death was not treated casually, and the following issue handled the subject delicately but not without impact or repercussions. So, who’s to say Roberts may pick a more prominent member. Or, maybe the newest member - - that would be a shocker. I’m just hoping the treatment is done properly and not superficial. See you on Wednesday 7/12!

ART:  The images that illustrate the text of the introduction are perfect.  Ryp does a stellar job on the prologues. His art is different than Robertson, reminding me of Paul Gulacy (a favorite), but compliments it very well.  Getting the incredible creative talent of Robertson to illustrate the rest of the book is like placing a giant scoop of ice cream on top of our favorite cake.  3 POINTS.

COVER: A plethora of wonderful covers across the first four issues. That’s why I recommend picking up the Trade Paperback — so you can enjoy them all without breaking open the piggy bank. 2 POINTS.

READ AGAIN?  Yes. Every time I re-read this I find something else to appreciate.1 POINT.

RECOMMEND?  Yes.  This is better than I ever expected. 1 POINT.