Often, when receiving announcements of books written by publishers, I cringe as thoughts of the worst scripts of Dan Didio and Bill Jemas come to mind. That’s not to say that publishers don’t possess writing chops, because many of them do - - including Ted Adams. Count him among the small handful of publishers who have the skills to write a good story.

DIABLO HOUSE pays homage to the iconic horror comics of the past, particularly EC’s ground-breaking TALES FROM THE CRYPT as well as DC’s later HOUSE OF MYSTERY.  It utilizes the familiar method of having a host act as link, guiding readers through a series of horrific tales, and sprinkling the narration with wry humor and cutting remarks.

Featuring an eclectic mix of Spanish and Aztec architecture with sea culture images, there’s an unusual hotel/resort at 666 Prospect Avenue in La Jolla Cove, California. Riley, the zombie-looking surfer bum serves as host.  Like many popular tourist attractions, advance tickets are required. Riley conducts daily tours, two on Sunday, and escorts visitors through the various Rooms of Hell.  Many famous people have visited the hotel, and some have permanent Hell Rooms reserved for them.

That leads us into the first issue’s story, the tale of a married couple who ride the fame and money coaster to the top only to come plummeting down. 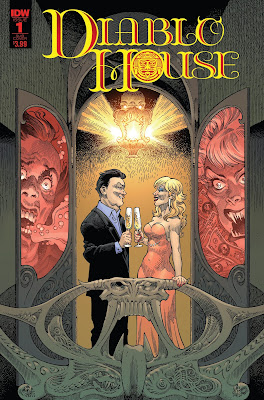 RC met neighbor Angie while both were in kindergarten, and began a friendly relationship that carried them through high school into eventual marriage. Angie came from a dysfunctional family, to say the least, and this affected her psyche in ways readers will later find out.

RC goes on to work as operations manager at Fitzy’s Fast Fresh Fish, a beach-side fish taco stand with nationwide ambitions.  RC helps the restaurant chain climb to the top, and at the prompting of Angie, screws the owner out of the business. It’s a story that will remind film-goers of THE FOUNDER, except there’s a grisly twist where the two similar stories diverge. I saw the ending coming, but it doesn’t detract from enjoying the story.

All this is illustrated in respectful horror comic fashion by the incredibly detailed artwork of Santiperez. Publisher Adams saw his portfolio while working in Spain, and hired him. He created this book because it’s the perfect showcase for the best of Santiperez, whose art reminded Adams of classic Bernie Wrightson and Michael Kaluta.  It certainly does.  Add a dose of Jack Davis, Wally Wood and Darick Robertson to the influences and you’ve got something new and exciting to view and drool over.

There’s a short filler story at the end of the book, that for once is actually funny, fits the mood of the book, has equivalent artwork, and justifies the extra page count. (Please take note, Marvel.)

STORY:  Good introduction to the theme of this title, and a clever opening story.  I’m excited to see what’s coming. 2.5 POINTS.

ART:  The U.S. debut of a Spanish artist that is going to draw a lot of attention.  His work alone is worth the price of admission.  3 POINTS.

READ AGAIN?   If you don’t, you’ll miss the extra details that Santiperez hid like Easter eggs within the art. Look for several familiar logos among the woodcuts on the massive entry door, and the appearance of tiny skulls in unusual places like steering columns and fountain pens.  1 POINT.

TOTAL RATING: 9.5 POINTS. So close to perfection! The only thing that kept this from a perfect score was the storyline which borrowed from the movie enough that I had to remove a 1/2 point for originality.