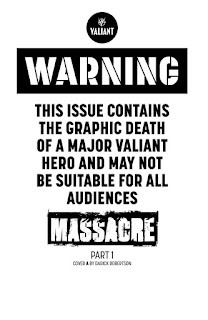 The advance press for HARBINGER RENEGADE #5, the prelude to HARBINGER WARS II, made frequent mention of the death of a major hero in this issue.  I’m certainly not going to spoil it by revealing anything here except to say — if you read the HARBINGER first series issue where Flamingo was killed - - prepare yourself. You haven’t seen anything like this before. Unlike other publishers, I trust Valiant to keep characters permanently deceased when they get killed. (I’m a little bit sad over this because I actually like the characters involved. Yes, it’s not singular.)  The story arc is titled “Massacre” and there’s a good reason for that - -  I’m more inclined to call it “Blood Bath”!

In another bold move, the first issue of HARBINGER RENEGADE back on the stands after a few months off doesn’t even feature the Renegade team or even mention them.  Not a single panel.  However, it will all make sense after you read the issue and get a hint at what’s about to happen next. 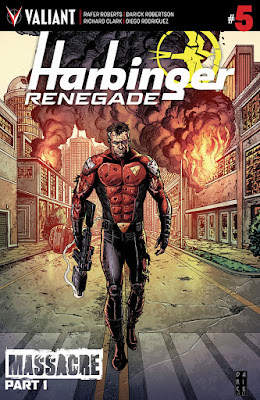 The entire issue is devoted to one massive battle in Rook, Michigan the stronghold of the seven members of the Generation Zero team, plus a group of even younger unactivated psiots and 40 civilian soldiers . Things get busy right away and stay there until the final pages. In case you aren’t familiar with this group, they are a group of very young (from 12-20 years old) psiots who were liberated from a Project Rising Sun (P.R.S.) facility during the first Harbinger Wars.

As described this issue, despite their youth they are a formidable bunch: “Our targets have 168 blind kills, including 11 H.A.R.D. Corps soliders.”

A battle team of only five H.A.R.D. Corps (special forces with implants that can activate enhanced abilities through satellite activation) under the command of Major Charles Palmer is dispatched to attack and retrieve as many fugitive P.R.S. psiots as possible.   Scripter Rafer Roberts helps sort out the various warriors from both sides, by either addressing them by name in the dialogue or including explanatory captions to identify them.

I can’t recall reading any other versions of the H.A.R.D. Corps where they were so matter-of-fact, mission-oriented, and uncaring when it comes to casualties. Major Palmer especially seems to have turned into a giant hard-ass under Rafter’s direction. Here’s his directions to his team: “Keep the civilian body count to a minimum. But don’t jeopardize yourselves on tis mission to spare some wannabe-revolutionary snot-nosed brat. You got me?”

In addition to a high impact jawbreaker of a story that plows through the panels at an incredible pace, this issue serves as a showcase for the fabulous artistic skills of Darick Robertson. The action and battle scenes are vivid, and will leave a long lasting impression.  I’m especially fond of the gigantic dragon-winged Cthulhu monster that Generation Zero member Animalia changes into, big enough to crush a plane.

P.S.  If you read my review of the HARBINGER RENEGADE trade paperback (see yesterday’s blog) — without mentioning characters by name, I hinted at two members of the Renegades that I thought might die.  I was completely wrong, not even close. However, I wouldn’t put it past Roberts to introduce another death as this big battle story plays out across the next several issues. 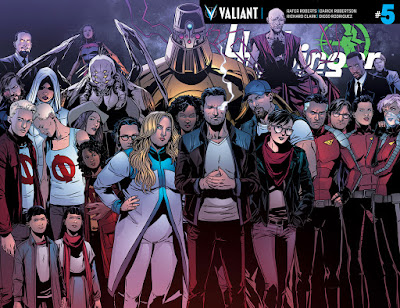 STORY:  I’m numb after reading and viewing such carnage. Kudos to Roberts for maximizing the effect.  There’s not much extra here besides the battle, expect the revelation that H.A.R.D. Corps now works for Omen, a security contractor who seem even more ruthless than P.R.S. was.   2.5 POINTS.

ART:     I haven’t seen Robertson illustrate battles on this scale before.  He takes full advantage of the opportunity. Breath-taking.  3 POINTS.

COVER:  Great impact from all the covers, even the blank one with the scary warning. Just try to forbid someone from seeing something, and see what happens.  2 POINTS.

RECOMMEND?   I do believe this is very close to becoming my favorite Valiant series. That alone says a lot.  1 POINT.

TOTAL RATING: 9.5 POINTS. Near perfect. Another winner for Valiant. Check it out.