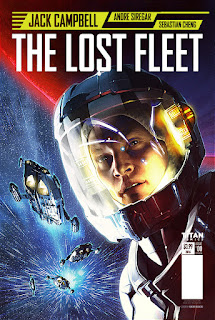 The world of Jack Campbell’s Lost Fleet comes to comics with this first issue, with an original storyline that apparently occurs after the events of the last book, Lost Fleet: Victorious.  Campbell’s Lost Fleet series is very popular, comprising six novels that have been published in over 14 languages. Combining military science-fiction with classic elements of space opera, the novels center around Captain John “Black Jack” Geary, a skilled military officer and commander of the Alliance Fleet.  There are two human races at war with each other in the Lost Fleet novels - - the Alliance and The Syndic.  This is not a simple conflict of good versus evil, but much more realistic.  There are elements of both heroism and villainy on both sides.

LOST FLEET the comic centers around the exploits of Captain Michael Geary, who grew up in the shadow of his great-uncle and war hero Black Jack Geary, now presumed dead.  During a space battle, Michael becomes captured, but receives some hope in the presence of Captain Destina Aragon, a Syndic officer with rebellion and escape on her mind.

STORY:  Well done, in what could easily be a confusing matter for new readers unfamiliar with Campbell’s world. It definitely helps that he is writing the comic rather than someone trying to adapt his works.  It’s a complex story with several subplots, but moves along at a good pace to keep things entertaining.  2 POINTS.

ART:  There’s  lot of story to get under wraps in this debut issue, so it doesn’t allow the artist much space to shine.  I can see hints of well-illustrated battle action in the larger panels on some pages, although the artist has to employ a lot of short, wide angle panels to properly move the story along.  I can’t wait to see what Siregar does when it comes time to illustrate the eventual space battle.  2 POINTS.

COVER:  Tells it all, and lets readers know exactly what they are getting into.  1 POINT.

READ AGAIN?  Definitely.  You just won’t be able to grasp the enormity of the story without multiple readings. It’s worth the effort, if this is what you like.  1 POINT.

RECOMMEND?: Not everyone’s cup of tea, but for fans of military science-fiction and/or space opera, this is one to collect. 1 POINT.

FINAL RATING:  7 POINTS. Definitely worth a peek.  Issue #2 comes out later this month, so don’t delay.