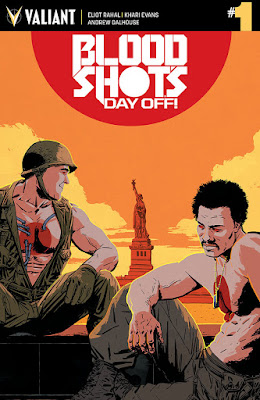 BLOODSHOT’S DAY OFF one-shot (Valiant Entertainment, July 05 release date)  Writer: Eliot Rahal. Artist: Khari Evans. Color Artist: Andrew Dalhouse. Letterer: Dave Lanphear. They still give out awards for single issue stories, don’t they? This book deserves consideration and should be nominated. It’s a complete-in-one-issue story that doesn’t even require any prior knowledge of Bloodshot to be appreciated and enjoyed. There’s enough of a flashback provided through an exit interview to give readers an understanding of the two main characters. 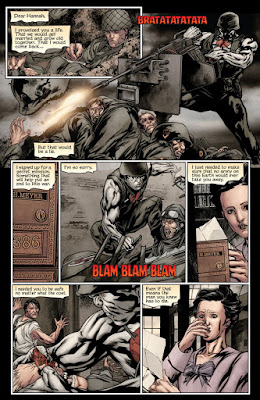 Tank Man and Viet Man are earlier versions of Bloodshot created by Project Rising Sun during World War II and the Vietnam War respectively. They were a significant part of the action during the Bloodshot Island story-line, and escaped along with Bloodshot himself to take part in the events detailed in the BLOODSHOT U.S.A. mini-series. Both soldiers have logged in enough consecutive hours of active duty that they are given a one-day vacation. An upgrade to their internal programming allows both of them to appear as regular human beings so they won’t stand out in the crowd or be bothered during their shore leave. But the last thing that Tank Man and Viet Man want to do is hang out together, so they go their separate ways with each hoping to revisit their former stomping grounds and rekindle past relationships. However, they were both officially pronounced dead when they accepted the Bloodshot transformation, and they learn that they are basically alone in the world. The revelatory scenes for both Tank Man and Viet Man are very touching. The final scene where they come back together and share what they found is heartfelt, with a great final message. 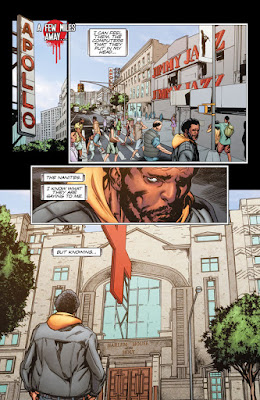 BC RATING SYSTEM  STORY:  In the current comics age of multiple issue story arcs and epic crossovers galore, a quality single issue story really stands out. This is a good one. If you only want to pick up a single book to give Bloodshot a try, this works great. I think Jeff Lemire (my favorite Bloodshot scripter) would be proud of Rahal’s work here. It reads like a Lemire story. 3 POINTS. ART:  Very well done, especially the settings and the details that Evans puts the focus on. The art helps emphasize the points of the story, and that’s a good partnership. Emotional reactions of the characters are spot on. Evan’s facial close-ups and musculature on the two heroes reminds me of Bart Sears. However, Evan’s work on the scenes is unique to him and just as good. 3 POINTS. COVER:  Good cover, although it might dissuade some readers to pick this up. When I first saw the cover, I thought it was just a fun romp story, like a fill-in issue. Glad I decided to read inside. 1 POINT. READ AGAIN?  Very touching, and worth a second read 1 POINT. RECOMMEND?  As an example of how stand-alone single-issue stories can still entertain and excite readers, YES! 1 POINT. TOTAL RATING: 9 POINTS. Near perfect. That’s the second Valiant book within the last 30 days that I’ve rated a 9. Keep up the high quality, please. Much appreciated.