Sometimes They Come Back

By Ken of the Comics Podcast of the Damned - April 23, 2014
REVIVAL Vol. 1
Writer: Tom Seely
Artist: Mike Norton
Image Comics | graphic novel | $12.99
Image is one of my favorite publishing companies. Along with Vertigo and Dynamite, Image is a great place to find creator owned, non-capes and tights stories that are consistently compelling. Revival is the latest breakout hit from the same company that brought us such fan favorites as Fatale, Elephantmen, Invincible and Saga.
You might know Tim Seely as the writer of Hack/Slash and as the penciler of the New Exiles. Mike Norton has illustrated extensively for DC and has his own webcomic, Battlepug. 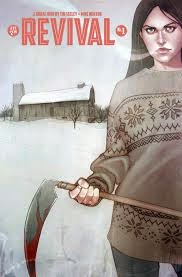 Revival is the story of a small town in Wisconsin where the dead are returning to life but it’s not a Walking Dead wannabe. When the dead rise they are just as you remember them, a doting grandmother, a son taken too soon or a dearly missed spouse. In a town that is under government quarantine, decried by the clergy and under siege from grave robbers looking for the key to immortality, Officer Dana Cypress is trying to solve a murder that may have been committed by the of the Revived.
The writing in the book often jumps from the main narrative to short vignettes of people in the town dealing with the otherworldly implications of the dead returning to life. While I usually don’t like straying far from the main narrative, Seely does a good job at this. Sometimes he weaves some minor characters into the main tale and other times the small stories help to flesh out the town while having unexpected payoffs. The art in Revival is clean but detailed. The flat tones help impart the noir feel the book is going for but also works well for action scenes of which there are many.
The book succeeds at turning the zombie genre on its head and exploring its novel premise with asides while moving the main story forward in the first trade. I eagerly anticipate buying the second.
Final rating (out of 5):