It’s been a long time (October 2013) between issues of INDIE COMICS MAGAZINE.  Comics readers interested in independent creator-driven works have had to explore the hard way - - through painstaking searches on the Internet.  What INDIE COMICS MAGAZINE does so well is to showcase some of the cream-of-the-crop creators in a convenient print magazine that makes it much easier to get acquainted with the works of these hard-working writers and artists.  What better way to get a good taste of what’s available should curious readers choose to invest further. 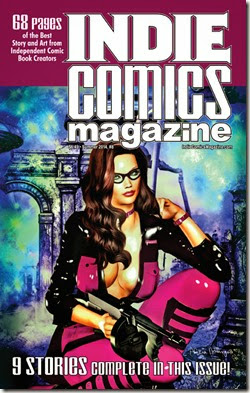 What makes this infrequently published magazine so valuable is that every well written short story inside its pages is prefaced with a short biography of the writer and/or artist and includes web addresses where interested readers can see and purchase more of their works.

The magazine is available only through pre-order in the monthly PREVIEWS catalog with print runs limited to 1,000 copies.  That makes it essential for anyone interested in this title to put their pre-order in ass soon as possible through their local comic book shop.  As much as we’d like to say that you can pick this up from your favorite comics store, it’s highly unlikely to see INDIE COMICS MAGAZINE on their shelves.  Most stores are going to carry only what their customers pre-order, and then hold the copies for them.

What those who decide to give this title a chance will see in Issue #8 are ten original illustrated tales of action, adventure, horror, folklore, crime, newspaper dailies,  and non-traditional super-hero fare as well as graphic expressionism.  We’ve been reading INDIE COMICS MAGAZINE on a regular basis and are beginning to recognize some of the regular contributors.  You will be treated to stories of rock bands signing their souls over to the devil (with art done in a cool Scooby-Doo style), philosophizing paid assassin/snipers, cocktail afficianados, weird zombies with an interest in ants, reprints of a high quality indie daily newspaper strip, tatoos and voodoo, an albino super crime fighter, and some more zombies. 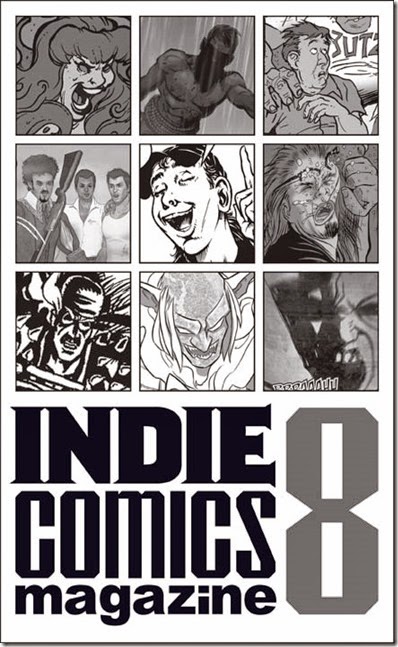