Before Infinity, There was Annihilation 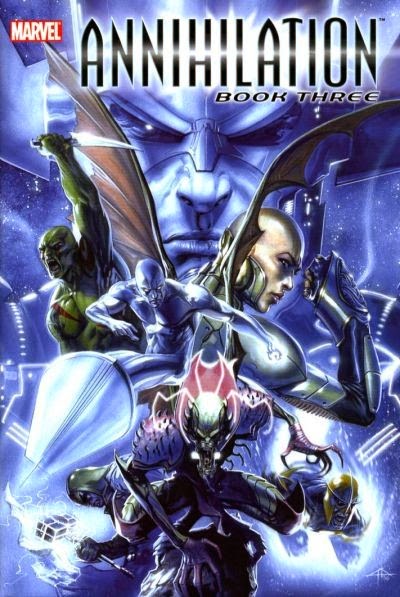 As we reach the end of Jonathan Hickman’s fantastic Infinity miniseries, I find myself thinking more and more about the last big cosmic crossover, Annihilation. Annihilation was a six issue mini with a multitude of crossover issues (collected in Books 1 and 2) and an epilogue mini called Annihilation Conquest. Unlike the current series which draws in all the major players of the Marvel U, Annihilation focused mainly on Nova as well as the other space-based heroes such as Drax, Gamora, Peter Quill (taking a break from being Starlord), Firelord, Red Shift and Stardust.
The Annihilation Wave, composed of warships led by Annihilus, breaks out of the Negative Zone and into deep space as a result of the universe’s constant expansion. The Nova Corp is the first victim of the wave, being totally wiped out with the exception of Richard Rider who then is imbued by the Worldmind with the full power of the Nova Force. Gathering an army composed of the members of the Guardians of the Galaxy and some former heralds of Galactus, Nova makes a desperate last stand on dying world after dying world as the wave pushes inexorably towards Earth.

Harkening back to the larger than life cosmic crossovers of the ’80s and ’90s often penned by Jim Starlin, Annihilation is a long overdue addition to this collection. Eventually pulling in every cosmic character from Ronan the Accuser to Galactus, this series pulls no punches as alien civilizations crumble and fall one after the other. Overshadowed by the other crossover going on at that time, Civil War, Annihilation was arguably the better event.
The writing in this series is fantastic and leaves you on the edge of your seat with hard fought and seemingly hopeless battles right through to the final issue. Although I’m not a Nova fan, I thought he was handled exquisitely in this book as he mourns the loss of his corp while trying to save the rest of the universe. The art is clean and crisp throughout and credit is due to Andrea DiVito for his backgrounds which never give in to the easy convention of depicting space as an empty void with nothing for the reader to look at.
The multiple tie-ins collected in Books 1 and 2 are excellent almost without exception.  Although the crossover seemingly has too many tie-in issues, they help to flesh out the back stories of those involved and display the intricacies involved in the conceiving of this story. The subsequent series, Conquest, deals with the fallout of the destruction that happens in this trade and is also highly recommended.
Final rating (out of 5):