From The Archives: continuing down the HARBINGER trail

Editor’s Notes:  Today marks the beginning of the end for the current HARBINGER series, with part 1 of a 3 part “Death Of  A Renegade” story arc in HARBINGER #22 that leads up to the final issue in July with HARBINGER #25.   I am still in shock to learn that my favorite Valiant title is going away, but also a little giddy with anticipation as I expect things to wrap up in a very big way.   If you haven’t been following the HARBINGER stories, I will review them all here so you can catch up.  Just make sure you score a copy of Issue #22 today!

The new Valiant books are all worthwhile, combining engaging story and intriguing art. The best of the bunch is HARBINGER, which recently supplanted X-O MANOWAR as my favorite of the new titles based on recent issues.  Get them both - - but if you’re on a tight budget then pick up HARBINGER.  Issue #0, which drops in comics stores today (2/06)  is a great starting point.   Just in case you’re not a regular reader of this website, HARBINGER was named my PGHHEAD PICK FOR THE BEST REBOOT OF 2012 and you can read more about the first story arc in our Blog Archive for January 8, 2013.

HARBINGER is a thoroughly entertaining look at the seemingly unlimited power of the mind as exhibited by various characters and epitomized by the two main protagonists - - the wealthy “humanitarian” Toyo Harada and Peter Stanchek the extremely powerful but uncontrollable rebellious student who didn’t last long before breaking out of Harada’s school for mentally gifted.  They are two defined opposites.  Consider careful planning versus spontaneous reaction.  Harada is a character you admire but don’t trust, and therefore have a hard time liking.  Stanchek is an unstable, unpredictable, disturbed character who also happens to be in possession of super-powers and uses them improperly - - and is even harder to really like.  But because of the scripting talent of Josh Dysart you become fascinated and can’t get enough of either one of them. 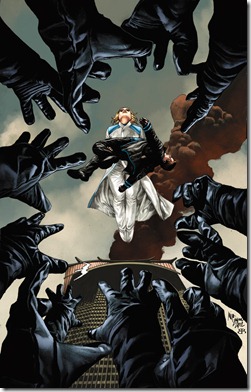 There is one character that I can muster a little more warmth for = Kris Hathaway, Stanchek’s childhood “friend” who was telepathically manipulated to love him.  She was later freed from Peter’s mental control, leaving her feeling betrayed, angry, empty and used in the worst way.  Issue #6 shows her recovering from her mental funk and coming to terms with her situation.  She’s very smart and totally bored with school, but these are just “normal” mental powers that she developed through her own personal readings.  I’m reminded of Spider-Man a little bit by her situation.  She’s not living with relatives like Peter Parker did, but her family situation is shaky.  Her father is unemployed, uninsured and recovering from a stroke.  Her mom tries to manage the rising medical bills, hang onto their home while keeping the debt collectors at bay and hopes for spiritual support to get by.  Peter Parker used his super-powers initially to try and make some money to help his family.  Kris is a powerless Peter Parker.  Instead she uses the abilities of others to try and make/obtain some money and aid her family.  She opts to become the manager of Peter Stanchek’s life, help him plan his comeback/revenge on Harada, and grab some money (bank-robbing, etc.) as compensation for her efforts.  Okay, maybe she’s not totally righteous and proper but I’m still rooting her to come out on top.

The other character to keep an eye on is Faith (who names herself Zephyr so she can realize her superhero fantasies).  Faith is an eternally optimist overweight high school misfit whose psiot powers are activated by Peter.  In gratitude for her feats of flight, she rescues a badly beaten Peter from what could have been a fatal confrontation with Harada. My second favorite line of Issue #6 is a thought caption from Kris: “Faith is a good name for this woman.”  (You’ll need to read it in context to fully appreciate it.)  My favorite line is also a thought caption from Kris regarding Harada:  “This man can do anything.  Kill anyone.  Affect everything.  And I ask myself, why is it considered heroic when a person with great power decides what’s right for the rest of us?” 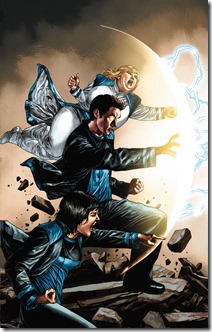 The resourceful and becoming admirable Kris also gets the better of Harada while avoiding the next confrontation, and obtains the list of “rogue” psiots not under the protective umbrella of the Harada Foundation.  She then helps Peter start to form a group of Renegades so that his side will have a better chance next time. She seems to be the brains of this loose group and Peter begins to act a little more stable and less chaotic after allowing her to pull his strings.

In Issue #7, the other secret organization interested in Peter and other psiots - the militaristic Project Rising Spirit – returns.  We meet some new latent psiots which Peter and Kris recruit and then activate.  There’s pole-dancing Flamingo with incendiary abilities.  Her initial meeting and back and forth trash-talking conversation with Kris is funny and not to be missed.  In Issue #8 we meet Torque, the dumb but strong and powerful protector of his crippled, bedridden brother.  Oh, wait - - the muscular guy may just be a projection made physical by the mental abilities of the guy with the useless legs.  This should be interesting.

OK.  I’ve caught you up with events without giving away too much.  Remember to check out this next issue, which debuts February 6.  I was lucky enough to get an advance preview. 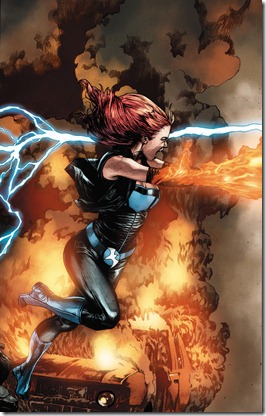 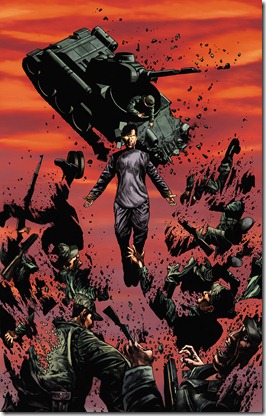 Which brings us to this issue, and a great place to begin as well as a great place to continue.  “Few know the events that put Harada on the road to save the world from itself . . . and fewer still know why that mission is so personal” - - - and this issue gives us the details and background.

Hiroshima, Japan August 1945 is when Harada’s powers were activated by the atomic bomb devastation during which he lost his family.  This issue flips back and forth between a very young and alone Harada finding his way (and his powers) where selfishness and corruption bloom anew amidst devastation.  These events probably turned Harada perceptions enough to help determine his future mission - - - however he learned way too early the power of violence and fear.  This background story contrasts with the present when an also young Darpa gets his first mission from mentor Harada and uses his powers to influence events in modern Syria.  It’s a dark little one-shot story that’s sure to make you want to look further within HARBINGER.