HARBINGER #22: Death Of A Renegade Part 1

EDITOR’S NOTE:  With just four issues to go, many new and curious readers will want to know if this is a proper jumping on point to check out this title.  It absolutely is.  I’m also reading this book out of sequence, and I had no trouble picking up the story and following it easily.  We’ll tell you just enough here to whet your appetite, and avoid spoilers.  Our regular exploration of this series will continue after this brief intermission . . . . . . 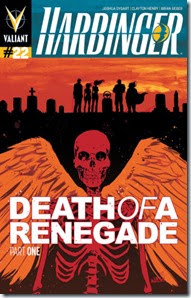 The credits page of every Valiant issue is a model of economy. Every book manages to summarize the story up to the current point in just a few paragraphs.  Even if a reader has never picked up a HARBINGER book before, the opening paragraph gets to the root of the main storyline . . . . .

“Peter Stancheck was a young man with incredible psionic abilities and a history of drug abuse and mental illness.  Adrift in the world and on the run from the authorities, Peter had reached his nadir when a powerful businessman named Toyo Harada -  also imbued with amazing psionic abilities – recruited him for training at the Harbinger Foundation.  At the Foundation, Peter learned to shape his powers and sharpen his thinking, but he soon realized that Harada, the Foundation’s leader, had few qualms about using violence to achieve his ends.  Leaving the foundation forever, Peter found other psiots, and along with his childhood friend, Kris, formed a powerful team know as the Renegades.”

This is the first of three parts leading up to the final issue of HARBINGER, beginning the campaign by the Renegades to take the confrontation back to the opposition’s home-front with the intention of disabling the Harbinger Foundation. It also alludes to the upcoming death of a Renegade member and drops hints as to who that might be.  Again, the contents page informs the reader in a clear and concise fashion, and brings us right up to the current point in time . . . . .

“Recently a computer hacker named @X claimed responsibility for a world wide leak of Project Rising Spirit and Harbinger Foundation data, revealing the true nature of Harada’s instituion, as well as the existence of psiots. . . . . .  Local authorities nearly captured @X, but Peter and his band of Renegades intervened and rescued the young hacker. . . . . Seeking refuge in their underground base, @X revealed to the Renegades that he had planned to draw them out, hoping to join the band of young psiots in their war against Harada.  The Renegades quickly joined forces with @X, and began working on a plan to defeat Harada once and for all.” 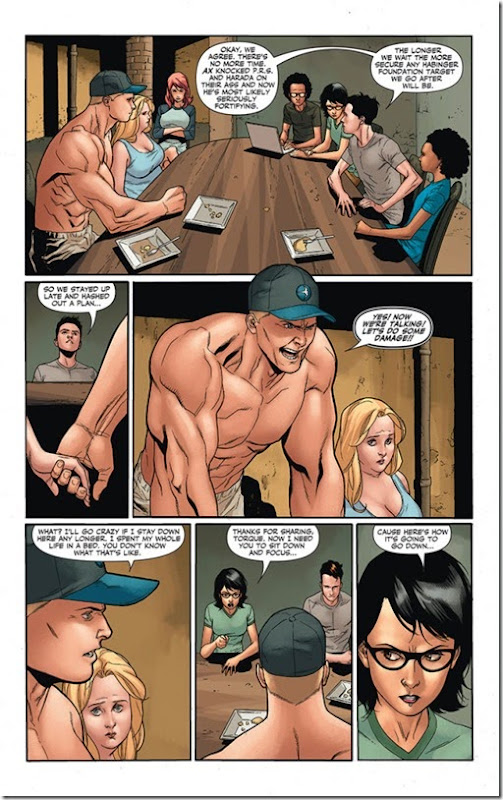 There’s a budding (and physical) romance between Faith and Torque.  While Peter comes up with the big ideas and big plans, it still appears that non-psiot Kris is still acting as manager of the team and exerts much control/influence. There are still trust issues between Kris and Peter.   New addition @X gets involved in the battle plan immediately, as the Renegades plot to strike at the Harada facility in Pittsburgh, and have him extract as much data as possible.  Gotta love that nickname - - @X!  How appropriate as well!  What does an “axe” do?  Hack, hack.

Harada amasses the majority of his forces in what he believes to be a frontline location for the upcoming battle,  and makes a passionate speech to bind them to his fanatical cause, portraying his organization as pacifists and the Renegades as war-mongering trouble-makers.  The Renegades team plan looks good on paper, and the opening moves include some activity that Harada was not expecting. But still, his fortifications are strong and his acting chief operating officer (Ion) is extremely powerful.  Harada’s team fights back and fights hard, managing to drive a splinter into the team that allows self-confidence to falter.

It’s still not possible to tell who will get the upper hand, and while the closing pages seem to indicate which Renegade member is in the most danger, there’s still more story and battle to come.  It’s a very fast-paced and exciting story that won’t disappoint.  Highly recommended.