So, what exactly is this 12 issue cross-over event that winds through issues of HARBINGER WARS mini-series, HARBINGER, and BLOODSHOT all about?  Prior to the beginning of this story, Bloodshot freed a group of psiot (super-powered) adolescents from a Project Rising Spirit (P.R.S.) experimental research facility.  Toyo Harada wants the escapees to join the ranks of the Harbinger Foundation.  Peter Stanchek and the Renegades want to keep the children away from Harada’s influence and control.  Since Bloodshot was a part of the initial capture and confinement of the children, he now feels responsible for their protection.

As my own preface, I’m going to repeat my answer to the question: “Why should I read any Valiant books?  And that answer is: because they consistently pack a full load of story and character development into every issue and accompany that with very good art. It’s the one-two punch that satisfies without pain.  All Valiant titles are reader-friendly enough that you can pick one up at random and find an engaging story to follow without confusion.  Well, except for the opening issue below, which crams a ton of content into 27 pages.  And that’s why I’m going to make an effort to wrap it up for you in the review below.  It took me three enjoyable readings to wrap my head around all the activity in . . . . . 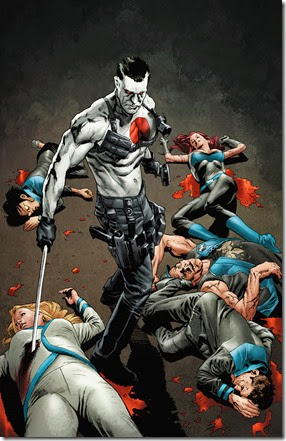 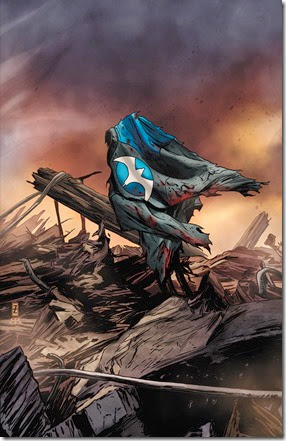 Issue #1 opens with a nice re-cap of Project Rising Spirit’s various attempts at weaponization of psionics.  This occurs via flashback during an interrogation of P.R.S. acting director Morris Kozol by a trio of federal national defense directors.

The somewhat successful China mission is reviewed, when a team of four very young psiots (from 14 to 20 years of age) completely wipe out a synthetic virus (including its human victims).  Through the tight scripting of Dysart and Swierczynski this plays out across just eight pages in a precise succinct narrative.  It’s incredible to realize that there is enough content and depth in this little scenario to expand to an entire issue, series, or a damn good sci-fi action movie.  But they get it done in a heartbeat.

The team is so interesting that we hope to see them again as HARBINGER WARS unfolds.  Chronos (code name) is the oldest and leader.  He is an energy healer and psychic surgeon.  Telic, 15 year old female, has both mental and physical prediction abilities.  The youngest at 14 years, Traveler is a male with teleportation abilities.  And most frightening is Hive, a 17 year old male who can absorb psychic imprints and wipe targets clean of all cognitive functions (an essential skill when wiping out the masses).

The egomaniacal Kozol boasts that he saved the world that day.  How ironic that the very virus they eliminated was one that was created by Project Rising Sun in a partnership with China, using their political prisoners as test subjects.  Also noted is that the psiot team was coerced into their bloody clean-up via explosive micro-chips implanted in their brains. 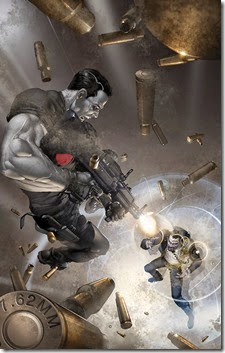 Renegade leader Peter Stanchek receives a violent vision of a potential future courtesy of the Bleeding Monk, who implores Peter to “find the children before they turn humanity upside down.”  Cut away to a hidden P.R.S. facility in the Nevada desert, where the young team from the aforementioned China mission are chaperones to an entire school of psiots from pre-school age and up.  It’s here where we meet a new and intriguing character in Monica Jim, a female who can morph into gigantic cartoon-like animals (a lion, for starters).  Here is also where Bloodshot infiltrates, disabling the security systems and allowing all the psiots to escape.

They escape not as one unit, but in two different directions with one small group remaining behind under the guardianship of Bloodshot.  Continuing the performance appraisal of P.R.S. director that began this story, Kozol now blames the escape on Toyo Harada and claims that he “orchestrated the attack on our facility.”  Through deliberate manipulation Harada made P.R.S. scientist Emmanuel Kuretich his “pawn” and forced P.R.S.’s hand, guiding them to deploy Bloodshot into a trap.  Kuretich was then instrumental in deprogramming Bloodshot and sent him on his way to attack the Nevada base.

The issue ends in a big surprise as Harada and some of his Eggbreakers (super-powered psiots trained by Harbinger) find a remote ghost town where some of the children are, expecting to retrieve the former P.R.S. psiot captives.  Instead they meet a hostile Bloodshot.  The conversation between Harada and Bloodshot is a classic moment:

HARADA: “I’m not affiliated with P.R.S. I’m someone who can care for those kids. I’ve got a transport to get them to safety. I’m not here to fight you. I’m the one who freed you. Now you can just walk away and live your life. You’re P.R.S.’s problem. Not mine.” 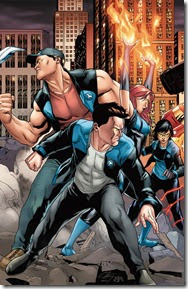 What a way to end the issue! What a great way to open this crossover series. I am all-in, and plan to share - - hoping you will accept the gauntlet.

You can get the full story of this epic event simply by reading the HARBINGER WARS title alone.  However, if you also pick up the HARBINGER and BLOODSHOT issues with the Harbinger Wars notation on the cover you get even more.  You will see these events in a bigger framework and understand that the links for this incredible cross-over were threaded through the Valiant universe many months ago and across several titles. So, on to the next item . . . . . 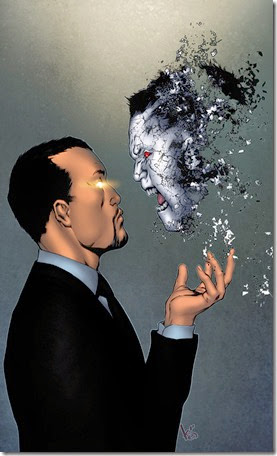 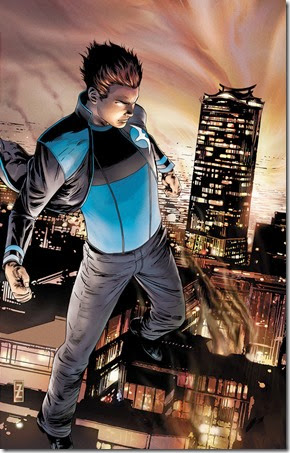 We learn that both Rising Spirit Securities and Harada International (both their original names) first crossed paths back in 1969, when then Rising Spirit director Carter tried to persuade Toyo Harada to partner in “an exchange of research for resources.”

As the capitalistic director of Rising Spirit puts it : “We’ve been in business since 1850. We have more patents than any other company in the U.S. A friendship with us would be advantageous.”

The idealistic (even back then) Harada responds: “Rising Spirit creates and sells weapons.  During WWII your tech was in German V-2 rockets and Manhattan Project facilities.  You played both sides of the conflict.  You’re war profiteers and mercenaries. When I have my way, the engine of innovation will no longer be institutional violence, and your company will be obsolete.”

There is an extended view of the scene from HARBINGER WARS #1 where the Bleeding Monk has a mental conference with Peter Stanchek.  He was playing both sides of the fence and called Harada into this shortly afterwards, deliberately letting him know that he (the Monk) sees a role for Peter in the upcoming exodus of P.R.S. pisot captives. 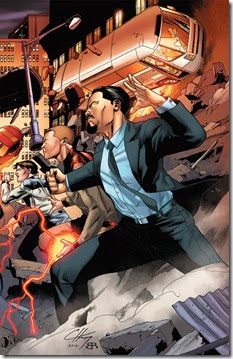 The other members of the Renegades want some downtime for relaxation and persuade Peter to allow them to visit a bar.  The situation becomes hilarious and a little out of control as Peter has to resort to mind manipulation of police officers in order to get his team out of the limelight. We get some insight into the characters of both Flame, Torque and Faith while Peter has a quiet discussion with Kris about what just happened during his mental encounter with Bleeding Monk and Harada. Later, during a poolside meeting at a Las Vegas resort, the members vote on whether to get involved in rounding up and protecting some of the escaped children.  The team is almost split right down the middle as to who has a compassionate side and wants to help versus who has a selfish side and wants to keep the team small and carefree. The individuals on either side may surprise you.

Also, despite his strong words it might appear that Harada may have a change of heart about partnering with Rising Spirit Securities, especially since his then mentor (the precognitive Bleeding Monk) cannot “see” into Rising Spirit and give him any pointers. 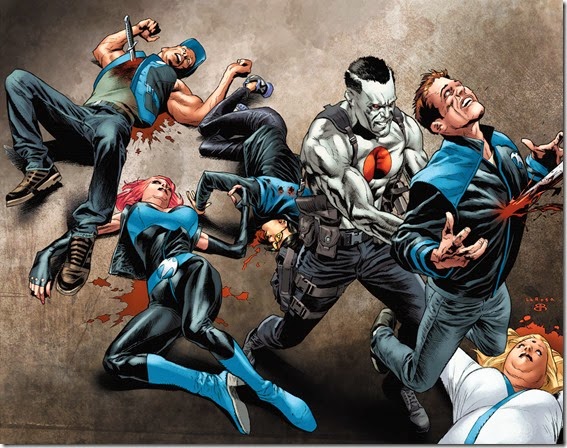 As this issues opens up, Bloodshot is leading a group of very young psiots away from the secret P.R.S. compound and into the Nevada desert, doing his best to keep them together and alive. During a bloody confrontation with some soldiers-for-hire, some of the childrens’ abilities manifest and are revealed.  Some of the children also object to Bloodshot’s abrupt and violent solutions and try to lecture and/or use their powers to influence him.  Some just start to doubt him.

The issue ends as they take refuge in a ghost town, get contacted by the rogue P.R.S. scientist Kuretich, and then Harada shows up (at the beginning of the scene from HARBINGER WARS #1).

Things are just getting warmed up.  I look forward to see where this goes in the next round of books. 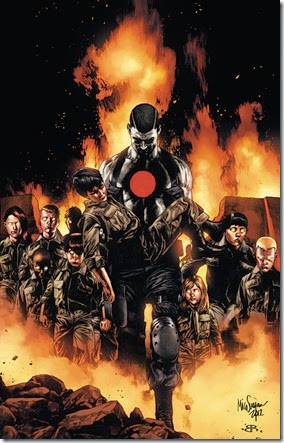 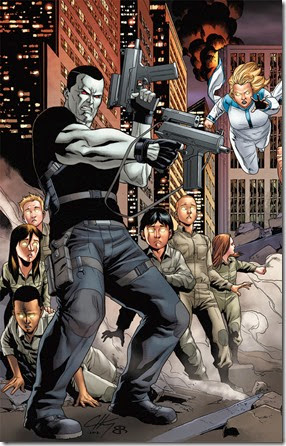