He’s one of the enduring heroes who won’t go away, and we’re grateful for that!  He was created and intro

duced in the era before television when Americans looked to books, magazines and comics for their major entertainment fix.  Doc Savage, like his fellow 1930’s pulp magazine counterparts The Shadow, The Avenger and others, continues to find a new audience every decade or so. There continue to be hardcover and paperback reprints of those ten-cent novels, the occasional film treatment, and a score of comic book adaptations and original radio plays and novels based on Doc Savage.  The model for the original Man of Bronze was influenced by the keen mind and deductive ability of Sherlock Holmes, the strength of Hercules, the scientific brain of Einstein, Edison and others, and the adventurous nature of Marco Polo and Allan Quatermain. Doc Savage then influenced later works and became the template for Superman, Batman, Mister Fantastic, Indiana Jones, Buckaroo Banzai and many modern day super-heroes.

Any lover of pure adventure tales can find hours of escapism in the Doc Savage novels. I was first introduced to the stories by the 1960’s Bantam paperback reprints with gorgeous covers illustrated by James Bama. There have been many comic book series since then from Marvel, DC, Millennium, Dark Horse and others and every one of them has been worthwhile and true to the source material.  The most recent publisher to try their hand at new works featuring Doc Savage is Dynamite Entertainment, who published a limited series scripted by Chris Roberson in 2013-2014.  I’m glad to see that they are giving Doc Savage another chance to catch on with modern audiences and have retained Chris Roberson as writer, who did a fine job on the earlier series. 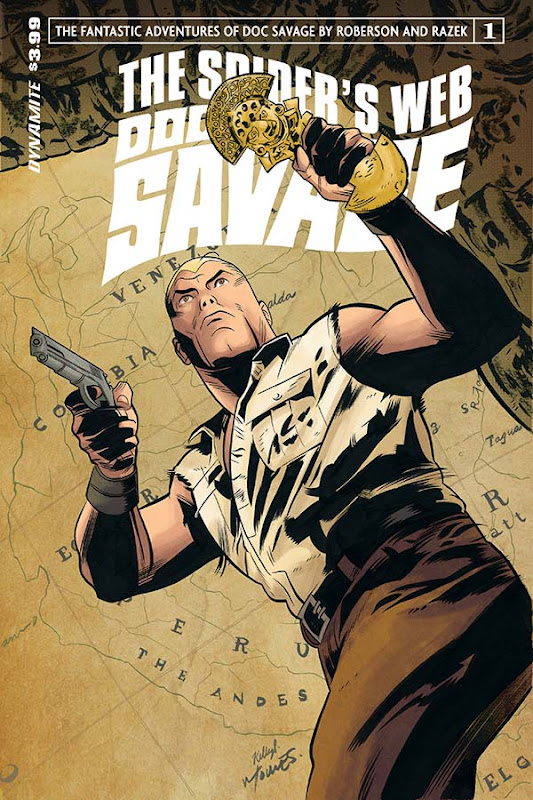 In this latest version of the Man of Bronze, writer Roberson has placed the story in modern times, and updated the Doc Savage family while retaining many of the elements that are part and parcel of the legend.

Back in the 1930’s Doc Savage worked with a crackerjack team of five allies, who all brought different skill levels and abilities into the mix.  He was often assisted by Pat Savage, his younger attractive female cousin, equally athletic and with light hair and bronze skin that made her look like Doc’s sister.  Their base of operations was the 86th floor of the Empire State Building in New York City.  Doc owned a fleet of cars, trucks, boats, and airplanes which were stored in garages, docks and hangars near the Hudson River.

The center of operations in DOC SAVAGE: THE SPIDER’S WEB is the towering skyscraper Savage Corporate Headquarters, a large complex housing modern technology and data processing equipment, where Doc’s staff members monitor events occurring across the globe.  It seems as if Doc Savage has dedicated himself to responding to natural disasters wherever they occur on the planet and has several teams he can dispatch to help out.  The names of some of the young team members are similar to some of Doc’s original five aides. Perhaps they are descendants, but that information has not been provided just yet. 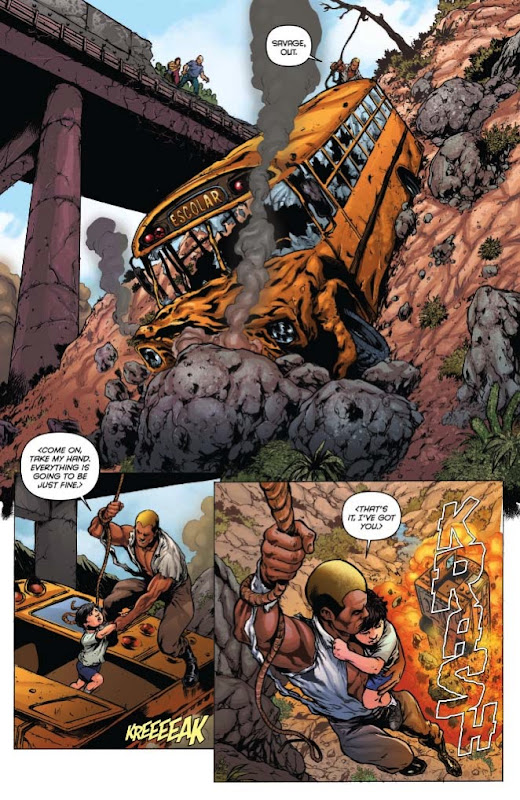 While those five companions are no longer around, both Doc Savage and Patricia Savage are present and neither one looking as old as they should.  Pat’s hair is now silver and there are some lines in her face, but she still is active, alert and maneuvers around without a wheelchair or assistance.  I would not expect that kind of active life for someone who should be around 100 years in age.  Even more surprising, Doc Savage looks even younger, and seems as big and strong as ever.  Either they are immortal, live an extremely clean life, discovered a youth serum, or just come from a line of long-lived ancestors.  Perhaps their youthful appearance and endurance will be explained in a future issue. Doc still gets right into the action as usual, using his strength to help with the earthquake rescue efforts.

Had this new adventure occurred only  in present times, I don't think I would be recommending this book.  While some of the characters are still there and Doc’s modus operandi hasn’t changed dramatically, it doesn’t have the feel of the original.  I shuddered when I remembered what happened to DC’s Blackhawk  title in the early 1970’s when they decided to update that group with new uniforms, super-powers, etc.  What a mess. I”d hate to see Doc Savage go down a similar trail.

However, writer Chris Roberson has wisely included a flashback scene of an adventure with the original team that is spot-on and has the flavor that Doc Savage fans have come to favor. Roberson cleverly links the current events to the past events.  There is a logical connection and the clues that help explain who the perpetrator might be are easy for readers to find. The flashback scene takes up nearly all of the second half of the book, and that is very welcome and entertaining.

Investigation of the current day earthquake site turns up a devic 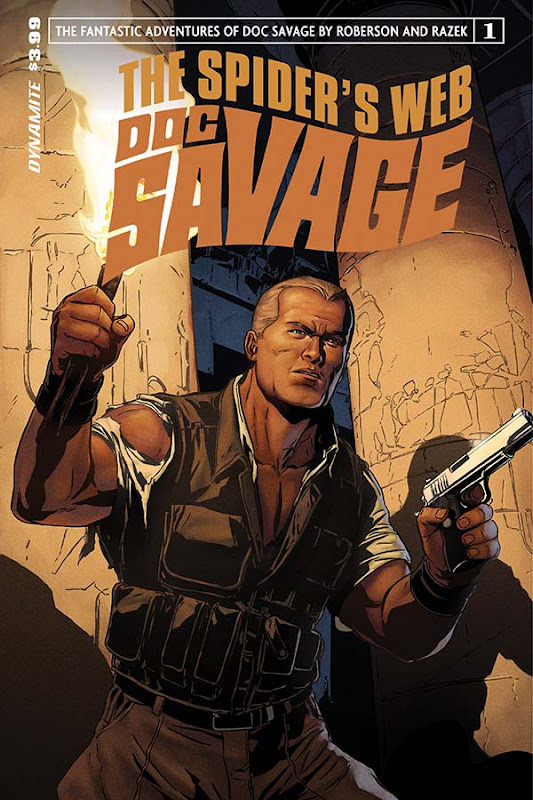 e that may have triggered the event rather than a natural occurrence.  Doc recalls a similar but more primitive device from a case back in 1935 regarding the “melting man.”  Just like the original writers, Roberson does a credible job of explaining the pseudo-science to help make the invention seem plausible to readers.  As 1930’s Doc explains to his crew: “The device is capable of generating strong vibrations like an oscillator.  The police officer didn’t melt so much as he was subjected to vibrations so intense that they liquefied his flesh and bones.”

The art by Cezar Razek is engaging and showcases his dynamic style in the larger action panels.  The colors and inks are vivid and sharp.  And the lettering job by Simon Bowland is easy on the eyes. (He must be the busiest guy.  I see his credits on almost every Dynamite book I pick up.)

It’s a nice start to a new story in DOC SAVAGE: THE SPIDER’S WEB.  The title implies that Doc may get embroiled in something more dangerous once his investigation into the vibration device pulls in more evidence and suspects.   It will be interesting to see if Roberson can maintain that delicate balance between a modern day Doc Savage operation and the original 1930’s pulp action style.

In another nice touch, many of the covers to Issue #1 are reminiscent of the same format and font that were used on the 1960’s Bantam paperback covers.