Pizza time for Batman in new and unusual crossover 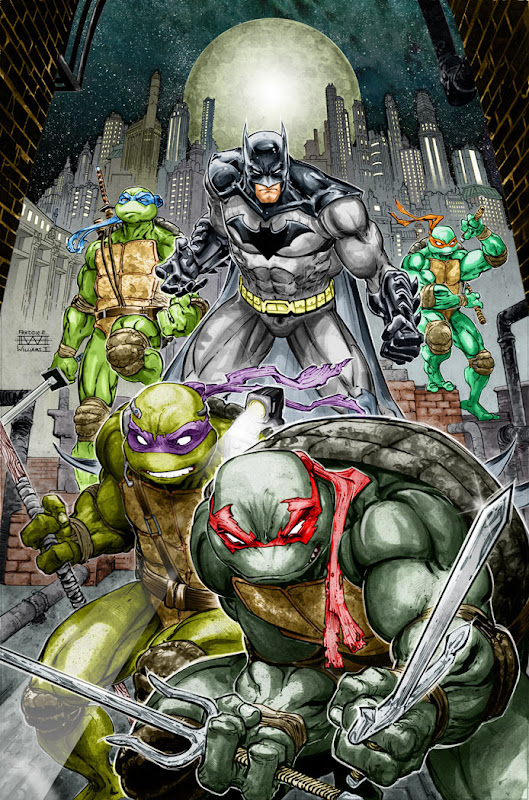 about this crossover during a panel at Baltimore Comic Con in September 2015.  At the time it seemed like a cool idea to have these characters meet, and the Comic Con crowd was certainly enthusiastic about it.  However, when the first issue became available for pre-order in October, I passed on the opportunity to get a copy.  Then, I was thinking that trying to blend these two very different characters and their worlds together would be a very daunting task and wouldn’t necessarily make for a good story.  Fun to see perhaps, but probably not a great read. A safer approach would be to wait for some favorable reviews, and then pick up the trade paperback and read the story all at one time.  You guessed it. I bought my copy of Issue #1 today.

On the upside, writer James Tynion IV certainly knows his way around the Batman universe.  But would he “get” the feel of the Turtles and be able to portray them accurately?  Forget about trying to stay true to current Batman and TMNT continuity and storylines - - just blend those two styles and moods together and you’ve got a winner.

After reading the first issue, and making allowances for the necessary introductions, I’m happy to conclude that Tynion pulls it off.  Somehow he keeps the Turtles true to form and manages to squeeze them into the world of Gotham, where this opening issue occurs.  So, if you’ve been curious about this book and thought about checking it out, I recommend that you do so.  This was fun.  I’m ready to continue.

Two things that occur make it easier to accept.  First, in the opening scene the Turtles are introduced to Gotham in a dark and mysterious manner, in a way that befits the storytelling style of Batman.  Secondly, just when readers may be struggling to accept talking humanoid turtles in the world of Batman, we meet the main villain this issue - - none other than Killer Croc.  What’s so unique about pizza-eating, video game playing Turtles after we’ve already accepted a talking and scheming overgrown crocodile walking upright?  These Turtles are serious when they need to be and playful the rest of the time, just like in their current series at IDW. 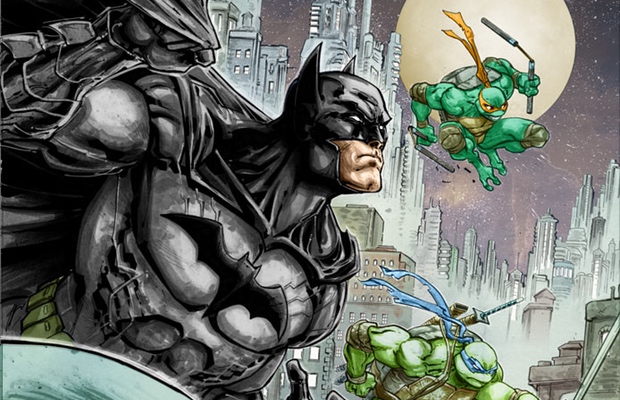 The story revolves around a series of attacks at various corporate research labs in Gotham, with different types of military-grade technology being stolen from each facility  The attackers are the Foot Clan, headed by Shredder.  Apparently, they have found a way to enter the world of Gotham and have a deliberate mission in mind.  While they don’t seem to understand how they got here or how to get back, The Turtles (accompanied by Master Splinter) also seem to have a purpose for being in Gotham - -  to stop the Foot Clan.   Batman gets wind of the thefts and starts his investigation by considering all the possibilities, and then realizing that the criminals are not the usual suspects but unknown and unfamiliar.  He suspects ninjas based on the evidence at hand. Through an interview with a scientist, he learns there are also “monstrous meta-humans” involved. While interrogating one of the Foot Clan, he hears the first mention of “turtles.”  They don’t meet each other until the end of the issue, which means we can expect a good fight (unless one side wants to chat) in Issue #2.

The art by Freddie E. Williams II is interesting and a bit different from the styles normally seen in Batman and TMNT books.  Everyone is very muscular, and Batman is bulky-looking as if he is wearing armor.  The inks and colors by the rest of the art team help give a look to Williams’ work here that reminds me of early Richard Corben.