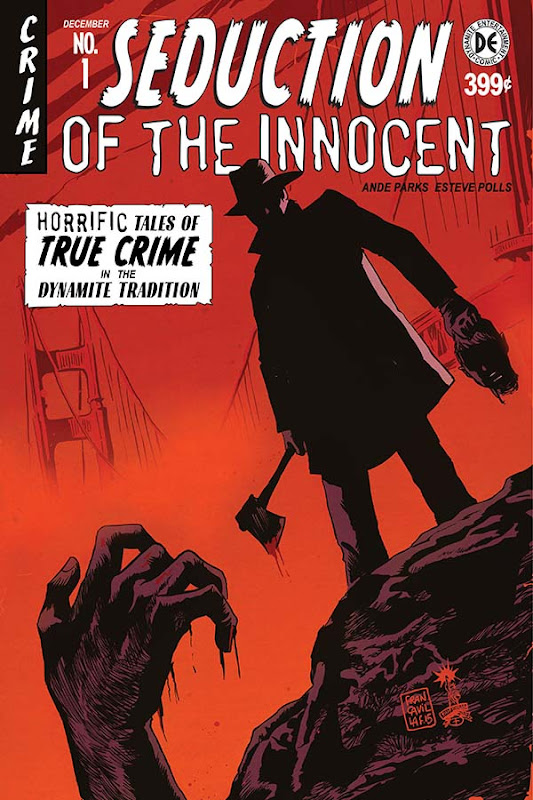 TION OF THE INNOCENT is an homage to those classic 1950’s EC comics that featured crime, suspense, war, horror, science fiction and fantasy.  The title is a sly reference to the 1954 nonfiction book by scaremonger Frederic Wertham which attempted to  “expose” the potential of comic books to corrupt young minds.  As a result of Congressional investigations prompted by the book, EC Comics discontinued their comics line and survived thanks to the popularity of a black and white magazine they published called MAD.  The hearings also resulted in the formation of the Comics Code Authority, a self-censorship group of comics publishers.

The cover of this new work recalls a different time and a different era for comic books.  For older readers, it will bring out feelings of nostalgia for those classic tales. The contents of SEDUCTION OF THE INNOCENT will go a long ways towards satisfying those cravings.  It’s like a throwback to the early days. Art and story evoke those legendary tales from the EC days.  Even the cover blurb is reminiscent of the way comics used to be marketed:  “Horrific Tales Of True Crime in the Dynamite Tradition.”  However, after reading the first issue I’m going to have a hard time believing the story is based on true events.  Possible, for sure.  Probable, not so sure.  However, we seriously doubt that those 1950’s comics that featured the word “True” in front of every title (True Teen Romance, True Crime, True War Stories, etc.)  were based on facts rather than pure fiction.

The opening issue takes place in 1954 San Francisco, and gets the little historic details right as evidenced by the scenes at a curbside newsstand.  A young law enforcement agent moves with his pregnant wife from Cleveland to make a new start with the newly formed FBI Organized Crime Unit in San Francisco.  He’s got a reputation as a sharpshooter but has a weak stomach for scenes of bloodshed. 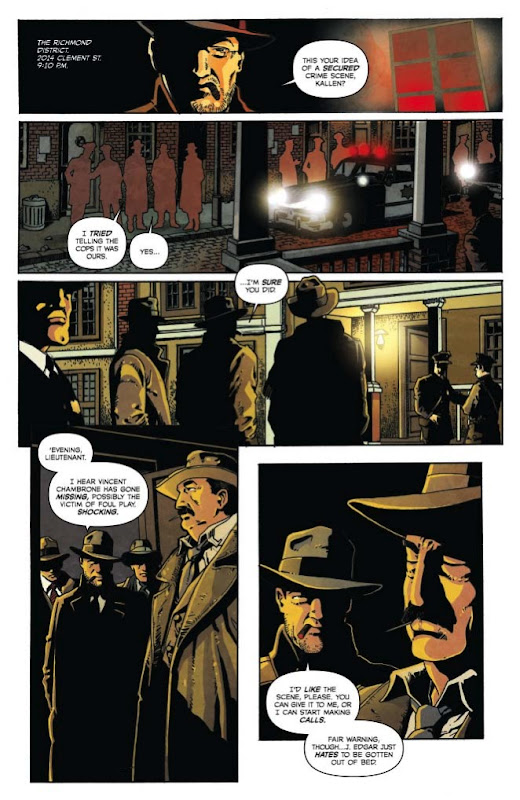 direction of the perpetrators.  A rival gang leader trying to muscle his way in by taking out all the competition?  Or is there a darker conspiracy at work?

The dialogue is shar
p and crisp and reflects the vernacular of the times without being corny.  Beyond the complications of the initial pilot there are sub-plots brewing involving the young new cop and others. There is a lot of depth in this story, and a lot of potential for good future issues.

The art is equal to the task.  Smaller panels.  Lots of action. More than enough blood and violence. Again, historic details are paid attention to with great care by the art team. Everybody in law enforcement wears hats and long coats.  The cars and transportation vehicles are true to the time period.

After reading the ending pages with conversation between two of the murderers, I wonder if the title of this book has even more significance.  And something they say would support that theory.  However,  I won’t spoil you fun by spilling the beans. Read the damn thing for yourself, pal.