EDITOR’S NOTES:  It’s good to see DC bringing back the Vertigo line of non-superhero titles in a variety of genres for mature readers.  We’d love to review them all but our BC Refugees Controller says the budget won’t take it.  (DC doesn’t acknowledge our presence; so we never get any review copies).  The plan was to see which titles were getting the most favorable word of month after a few issues and then wait for the eventual trade paperback edition.  But curiosity got the better of us; so we picked up this particular title.  Hope we made the right choice.  Review to follow . . . . . 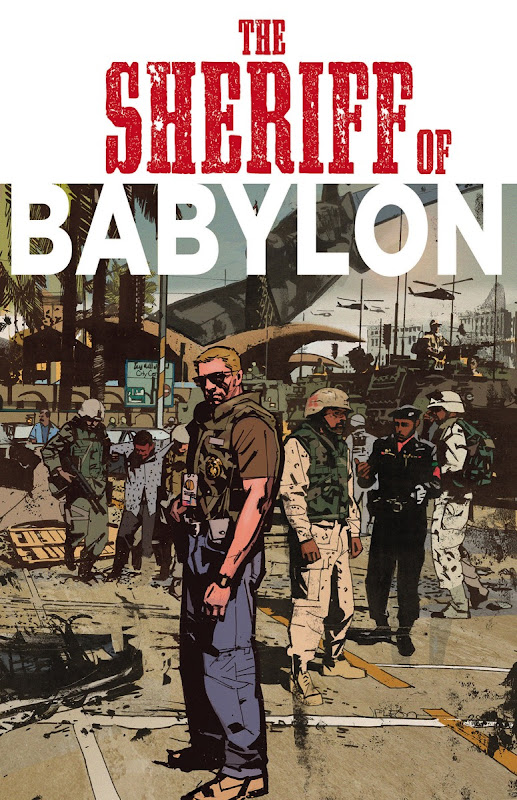 This new Vertigo title (released December 02, 2015) takes place in Iraq during February 2004, ten months after the fall of Baghdad, and focuses on the American occupying forces in the Green Zone.

Classifying THE SHERIFF OF BABYLON as a crime comic seems too easy. While it qualifies for that genre description, it could also be considered a war comic because of the setting, or a noir theme based on the way it’s told.  It doesn’t matter as long as it entertains and finds its audience. We are intrigued by what we’ve seen of Issue #1, but are also confused.

However, we’re fans of challenging stories that make the reader work to understand them as long as it’s not impossible to achieve that comprehension.  On the downside, sometimes the confusion is due to poor writing and/or poor visualization. So which is it as regards THE SHERIFF OF BABYLON?  We believe it’s intentional, deliberate and calculated. This story occurred during a confusing time.

Imagine that you are an American soldier or serving in any capacity (medical, intelligence, engineering, etc) in Iraq. Sometimes you cannot recognize a hostile threat. Some of the residents of this foreign country welcome your presence and others want you gone.  And it can be difficult to tell one from the other. The enemy doesn’t identify their soldiers by uniform.  And they use teens, women, the elderly, and children to accomplish their ends. It creates confusion.  Uncertainty.  Anxiety.  Tension.  You can never relax. Always on guard. Danger could be anywhere.

When exploring THE SHERIFF OF BABYLON the reader can become confused.  It is clear which Iraqi citizen is an ally and which citizen is not?  To what purpose is a character pursuing a particular action?  Is it clear to the reader when a character is confronted with a real threat?  Confusion in story-telling makes it easier for the reader to understand the experience of soldiers in this setting.  When the confusion serves the writers’ purpose, then it is good story-telling. We did not get to ask writer Tom King, a former CIA operations officer who served in Iraq, if this was his intent.  We just believe that he knows how it was from personal experience. Artist Mitch Gerads is a fine choice to illustrate a war story.  His ability to convey confusion, despair, sorrow and various emotions on the faces of the characters makes this quite a gripping tale.

Telling too much of what occurs in Issue #1 would do more than spoil the story  It would reduce the shock value.  There are some uncomfortable scenes that should be experienced first-hand for maximum effect. We’re going to make a comparison to an event that occurs in the story rather than give away the details.  Just imagine the uncertainty that a police officer assigned to the jumper squad of the emergency services department have to face.  As they try to talk down the person standing on a building ledge do they ever know for certain if that person fully intends to commit suicide or are they just depressed and looking for help?  There is a similar situation that military contractor Chris Henry, the main character, has to face but it’s more dangerous and deadly.  He doesn’t come off as being experienced at this and makes awkward conversation. The resolution to this is the scene that stays with us after reading Issue #1.  It makes a definite impression.

Christopher has the job of training the Iraqi police force.  He has to assume the role of a detective after one of the trainees is found dead.

Sofia is an Iraqi woman educated in the United States who has returned to her country.  She has a seat on the Iraqi council. She seems to have a lot of influence and her feedback and assistance is sought by American Army officers, Iraqi medical officials, tribal leaders and commoners and criminals.  It’s also unclear what her motives are. But she seems ruthless. But not without principles and values.

Nassir is an Iraqi police officer, formerly serving in that capacity under Saddam Hussein and now working with Americans. He’s seen more than his share of tragedy and loss and questions both his faith and his occupation.

The art is gritty and edgy, exactly what the story calls for.  There is also an impressive double page scene of a major highway intersection with towering buildings  in the background, some of them partially ruined and smoking. The colors are muted, conveying the dusty, overcast haze that must be present there.  There’s a Bible quotation in the caption that clarifies the connection with Babylon in the title.

There’s also an effective method used by the creative team to convey how extreme the violence can be.  It’s a jet black panel with just one word in white font:  bang.  There’s a lot to be impressed with in Issue #1 of THE SHERIFF OF BABYLON.

We believe we made the right choice of Vertigo title to review.