BALTIMORE, MD) – (August 31, 2015)- Rise and shine and conquer the world with a PREVIEWS exclusive Cthulhu mug from Surreal Entertainment. Perfect for lovers of author H.P. Lovecraft, the mug is available to pre-order exclusively from the September PREVIEWS catalog and is scheduled to arrive in comic book shops in late November. 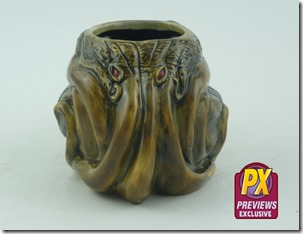 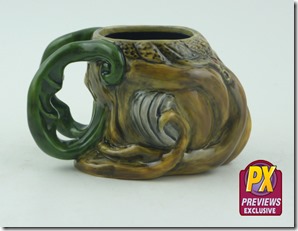 Dread Cthulhu, a.k.a. the Elder God from stories such as The Call of Cthulhu, will rouse you from your slumber when you have your morning tea or coffee in this molded mug shaped like Chtulhu’s head!  Whether you’ve been sleeping for only a few hours or many millennia, greet the day with a drink out of this highly detailed sculpted mug. Loop your hands through one of the two wing handles to take control of your mornings and get some motivation from the Great Old One.

The mug can be found on page 551 of the September PREVIEWS catalog and is available to pre-order for $16.99 at any comic shop using item code SEP152560.

Beginning his comic book career in 1981, Bret Blevins began a decade of working almost exclusively for Marvel Comics on many of their most famous characters, including Spider-Man, Wolverine, The X-Men, The Hulk, Captain America, Thor, Daredevil, Dr. Strange, The Fantastic Four, The New Mutants, Sheena, Ghost Rider, Conan, Solomon Kane, The Inhumans, the Punisher, Sleepwalker, Clive Barker's Nightbreed, The Bozz Chronicles, Cloak and Dagger, The Trouble with Girls, The Destroyer, Terror Inc., and various licensed properties, including graphic novel length adaptations of the films The Dark Crystal, Indiana Jones and the Last Crusade, Krull, and The Last Starfighter. Moving primarily to DC in 1993, Bret drew Batman, Superman, Supergirl, Starman, and Vigilante, and along the way drew Star Wars, Tarzan, John Carter of Mars, and Bettie Page for Dark Horse. A 146-page graphic of novel of Brian Jacques' Redwall illustrated by Bret was published by Philomel Books in 2007. In the mid-90's, Bret began working for Warner Bros. animation and won two Emmy awards while creating storyboards for the acclaimed Batman, Superman, Batman Beyond, Justice League, Static, Batman Brave and Bold, and Ben 10 cartoons. For Disney, Blevins has drawn storyboards for Tarzan and Atlantis, and copious artwork for various other Disney projects including Pirates of the Caribbean, The Scarecrow of Romney Marsh, Tinkerbell, Toy Story, Tron, and Wreck-it-Ralph. In addition to other miscellaneous advertising and illustration work, Bret is always busy drawing and painting from life, writing instructional articles for DRAW! magazine, and occasionally teaching.

Geof Isherwood drew comics for Marvel, DC, Broadway, and Heroes Of The North starting in 1982. Major title runs include Dr. Strange, Suicide Squad, Conan the Barbarian, Conan The King, Namor, and The 'Nam. Geof has also worked on over 60 film and TV productions, including X-Men: DOFP and X-Men: Age of Apocalypse, Being Human (US), and The Fountain. Geof teaches in the Concept Art and Illustration program at Algonquin College in Ottawa, Ontario. Geof is now working for Renegade Media, drawing the final issue of the soon-to-be-released Necromatics.

Justin Jordan first came to the attention of the comic-buying pubic writing his creator-owned The Strange Talent of Luther Strode (with Tradd Moore on art) published through Image Comics. That title was followed up with two sequels, The Legend of Luther Strode and The Legacy of Luther Strode. He has also worked on DC Comics' Green Lantern: New Guardians as well as runs during the "New 52" initiative on Superboy, Deathstroke, and Team 7. At Valiant Comics, he wrote the relaunch of Shadowman, and co-created Deep State at BOOM! Studios, Spread and Dead Body Road at Image Comics, and Dark Gods at Avatar Press. In 2012, he received a Harvey Award nomination for Most Promising New Talent, and contributed to the Eisner-nominated In the Dark: A Horror Anthology from IDW.

Joe St.Pierre graduated from the School of Visual Arts in New York City, and began his professional career in 1992 as a penciller for the fledgling comic book publisher Valiant, taking on writing responsibilities in time as well. His best known work at Valiant was a 10-issue run of the title Secret Weapons, which he wrote and drew. In addition to his work in commercial art and as a storyboard artist for just over 20 years, he has worked on titles at major publishers, including DC's Aquaman, Batman, Green Lantern, Superboy, and Superman, Marvel's Fantastic Four, Wolverine, X-Men, and he has the distinction of being the artist who most probably worked the most first issues featuring Spider-Man or Spidey family characters. He is currently working on his own title, New Zodiax.

Amongst our seasoned luminaries, Marcio Takara is a relative newcoming, having worked in comics since 2006. His art has graced the pages of Marvel Comics' Marvel Adventures Super Heroes, Captain Marvel, and Armor Wars, Image Comics' Dynamo5, BOOM! Studios' The Incredibles and Incorruptible, and DC Comics' Blue Beetle, The Flash, and Smallville: Lantern. He has also launched a successful Kickstarter project with writer Bryan Q. Miller called Earthward, and provided artwork for the game League of Legends.

August 31st, 2015 – New York, NY – VIZ Media, comiXology and Amazon announced today the debut of Weekly Shonen Jump across the comiXology platform as well as Amazon's Kindle Store. The English language digital manga magazine comes out weekly and is published simultaneously with the print version in Japan. This debut gives comiXology and Kindle fans a taste of the latest manga from Japan, on the same day, now accessible to English speakers across North America, the U.K., Ireland, South Africa, Australia, and New Zealand.

Today's magazine contains chapters of such hit ongoing manga series as One Piece, Bleach, Blue Exorcist, My Hero Academia, and Food Wars! Shokugeki No Soma.  "Weekly Shonen Jump is a fan favorite magazine where emerging and long-running hit manga series are shown to the world first," says Andy Nakatani, Editor-In-Chief of Weekly Shonen Jump, "We're excited to expand the readership of this magazine to the comiXology and Kindle audience."

August 24th, 2015, Mt. Laurel, NJ: Dynamite Entertainment is proud to announce the upcoming release of Vampirella #1969, a 48-page one-shot special that celebrates over 45 years of the vampire heroine's adventures in horror and fantasy. The over-sized issue celebrates the heady days of the character's earliest appearances with contributions from a roster of all-star writers and artists, including: Nancy Collins and Fritz Casas, Eric Trautmann and Brett Weldele, Phil Hester and Jethro Morales, Mark Rahner and Colton Worley, and David Walker and Aneke. Vampirella #1969 will debut in November and feature three covers: one by Robert Hack in retro-style dress, a cover by Jack Jadson, and a rare edition featuring Hack's artwork in black-and-white, much like the artwork of the original Vampirella magazine. 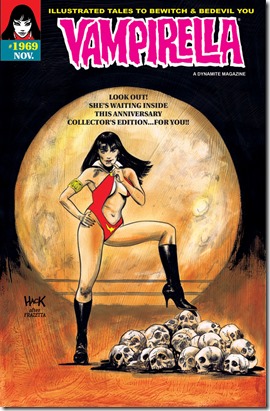 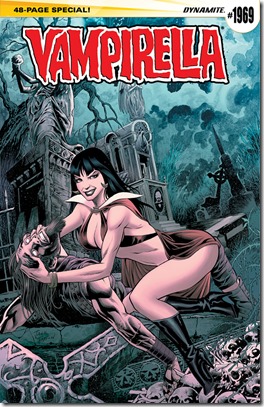 A raven-haired heroine, Varmpiella remains - even after four-and-a-half decades of publication - one of the comic industry's leading ladies, due in no small part to Dynamite Entertainment's stewardship of the character. Since Vampirella's very healthy resurgence in 2010, Dynamite has published two volumes of a monthly series, several miniseries and one-shot specials, and crossovers with multimedia brands and comic book peers. The Vampirella franchise is a haven for writers and artists with a penchant for the macabre.

V ampirella #1969  will be solicited in Diamond Comic Distributors' September  Previews catalog, the premiere source of merchandise for the comic book specialty market, corresponding to items shipping in November 2015.