Caveman with a Jetpack

While I love all of Valiant's current line-up, the one book I can't put down in X-O Manowar. Venditti's commitment to writing the character along with the great art and high quality that penetrates everything Valiant makes for one of the best third party publisher superhero books on the market right now.  But did you know that the original '92 series that launched the character also broke new ground and paved the way for the character you know and love today? 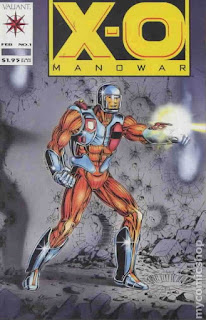 Valiant Comics was a comic book publisher founded in 1989 by Jim Shooter and a group of investors.  Created as a reaction to Shooter’s idea of what was wrong with comics at the time, the Valiant universe used a real-world timeline, focused on character-driven stories and was strongly inspired by the pulp characters of the 1940’s.

Their four original titles were Harbinger, X-O Manowar, Rai, and Shadowman.  In 1994, the publisher was sold to Acclaim after Shooter left the company.  The characters were repurposed as video game concepts and the comic lines were eventually abandoned.  In 2005, Acclaim filed for bankruptcy and the rights seemed to be in limbo.  However, in 2007 the rights were acquired by Jason Kothari and Dinesh Shamdasani.  Jim Shooter briefly served as Editor-in-Chief but was sued for breach of contract and stepped down.

The original X-O Manowar series ran for 68 issues from 1992 to 1996.  It features Aric of Dacia, a Visigoth barbarian, who is fighting a brutal war with the Roman Empire in the fifth century.  Running out into battle one day to fight what he believes to be the Romans, he is captured by super advanced aliens and taken aboard their ship as a slave.  Escaping captivity with the aliens’ most advanced sentient combat suit, he destroys the aliens’ ships and returns to Earth only to find that sixteen centuries have passed and he is now in the current day.  As a barbarian from the past with a futuristic suit now living the present, Aric is truly a man out of time to put Captain America to shame.

Along with his ever-traitorous partner, Ken, Aric kills the aliens on Earth who have been setting up the planet for an invasion through the front corporation, Orb Industries.  Now the CEO of a Fortune 500 Company who also cuts off the heads of brigands in Central Park while trying to find a way back to his own time, Aric has a lot on his plate.

The story pulls off the near-impossible feat of being compelling while also being outlandish.  The more unbelievable aspects of the story, like bionically enhanced dinosaurs (bionosaurs, for short, naturally), which comes up after the first trade, evoke nostalgia more so than disbelief.  The violence is relentlessly brutal and gory and when paired with classic early 90’s art, will surprise anyone who thought this ground was first breached in the MAX universe.  The violence never detracts from the story though, and the ample subplots and storylines emerging from the many hats Aric wears are sure to delight.