What I’ve been reading lately: Bat droppings + other pickings

Back in 2009, in the aftermath of BATMAN R.I.P., I sampled several of the new Batman-related titles that launched from that platform.  RED ROBIN could easily have been overlooked, and I’m glad I didn’t.  I might have decided that it was just DC’s way to appease the Tim Drake fans, since Damian took over as Robin to Dick Grayson’s Batman.   Writer Chris Yost really fleshed out the character of Tim Drake and added many interesting layers.  If you read the first 12-issue run in order you realize what a slow and proper maturation process was underway, and how by the end Drake has demonstrated some incredible progress in his physical and mental/deductive/planning skills, making him worthy of standing in for Batman.   What began as a simple story of one man’s search for evidence that Bruce Wayne is alive blossomed into a dynamic and suspenseful saga.

There are two essential story arcs that will give you a full appreciation of what Yost has done with this character.  Begin with the “Council Of Spiders” story that runs through #5 – 8.  A organization springs up to rival Ras Al Ghul’s League Of Assassins, seemingly for sport and with the intention of not just taking business away from the League but wiping them out as well.  Tim gets recruited to help find the members of the Council Of Spiders so Ras’s group can counter them.  Tam Fox questions Tim’s direction in Issue #5 and he admits he’s “gotten worse” but promises “I’m going to take them down. The Council, the league, all of them . . .  I’m going to take them down from the inside out.”  He keeps to his pledge in impressive fashion, ably illustrated by Ramon Bachs whose work on this book is equal to the level of Yost’s writing.  Marcus To takes over the art with Issue #6 and carries on in similar form. 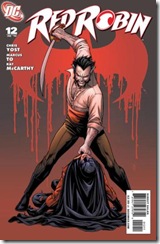 Follow this with “Collision”, which begins in BATGIRL #8 and then RED ROBIN #10-12.  After helping curb the threat of the Council of Spiders, Red Robin gains a prominent position and trust within Ras Al Ghul’s organization.  He then proceeds to make good on the rest of his promise from issue #5, going head to head with Ras and trumping him in delightful fashion as the story concludes.

Shortly after these events, Fabian Nicieza took over the writing chores on RED ROBIN, and I stopped watching this title.  I did pick up Issue #18, the beginning of “The Rabbit Hole” story, and was impressed with the opening storyline.  However, it morphed into a wacky internet world side-story in Issue #19.  While it was clever, it abruptly interrupted and broke the suspense that was built so carefully in Issue #18 and served to annoy me (as so much of Nicieza’s work does to me). So I stopped right there.

Tim Drake / Red Robin loses his solo title when THE NEW 52 debuts and becomes a member of TEEN TITANS in September.  I’m not sure what writer Scott Lobdell will do with the character.  I also don’t see Chris Yost’s name on any of THE NEW 52 titles and that is a bit disappointing.

BATMAN #608 SPECIAL EDITION is a $1.00 reprint of the opening chapter of the “Hush” story, one of the all-time classic Batman tales.  It was great to read this again, and drool over Jim Lee’s fabulous artwork.  If I only ever fork over the cash for a DC Absolute Edition it will be this one.  Lee was at the top of his game on this story, and that’s a very high mountain indeed.  I’ve also seen a preview of Lee’s art for the upcoming JUSTICE LEAGUE #1 in August and it’s amazing.

I thought I might want to pickup the trade paperback of BATMAN: ODYSSEY once it eventually sees print, so I grabbed Issue #1 to see if Neal Adam’s work can still captivate my attention as it once did.  It does.  He still has that magic touch.  However, the story (also by Adams) was a little dated and not as interesting as the art.  But, it’s the opening chapter in a 12-issue saga so I’m going to check the reviews and see if it doesn’t get better as it moves along.  I’m keeping it on my future purchase list for now.