“Post-apocalyptic science fiction adventure” - - - I used that short description last month to lead into my review of MARKSMEN #1.  It still serves to describe the contents of Issue #2, which goes on sale Wednesday, August 24th.    After reading about the events that occur in Issue #2, we still don’t know the time period in which MARKSMEN takes place or even how things happened to get to where they are today.  I did have some pre-solicit information from Benaroya Publishing that explained some of that. However, I can’t share that with you since I can’t locate that information and I also can’t recall any of it.  What I do plan to do is just sit back and enjoy the ride. 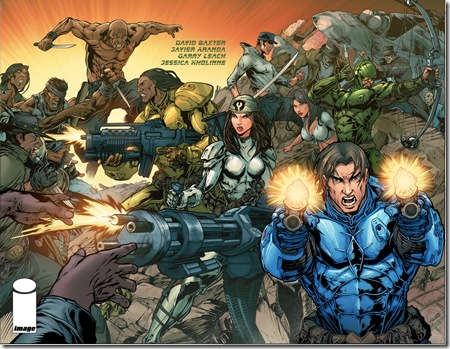 What you may appreciate are some battle scenes  (and a good knock-down fight) that are wonderfully depicted by the art team, reminding me of the classic Wally Wood style and beautifully detailed- - just like the best desert action scenes with armored jeeps and tanks from the pages of G.I. JOE comics.

Along with the action/battle scenes we are treated to some behind the scenes strategy sessions that give the reader a preview of just how well the enemy of New San Diego has prepared their battle plan and what appears to be a victory for the town could end up back-firing on them.  This issue also brings up the question of whether it is wiser for a superior force to just beat back the enemy invader - - or to mercilessly pound them into submission/retreat while killing as many of their numbers as possible along the way.  MARKSMEN #2 brings up this issue, but it doesn’t beat the reader over the head with it.  It’s there for you, but only if you care to probe a little and speculate as you read.  And that is one of the things I really appreciate about this book.  It can be a rollicking good action-adventure story to be enjoyed for pure entertainment value - - - or it can leave us to imagine and think about what decisions the survivors of this future world must face every day.  There are questions here about proper battle strategy between superior forces and seemingly over-matched opponents, science versus religion, solar versus fuel-powered economies, etc. 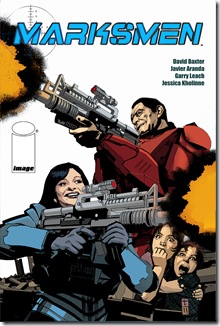 As the issue begins the jealousy that was building up in issue #1 between Lt. Herc and Sgt. Drake McCoy erupts into a great street fight brawl that ends just as quickly once more brass intervene, with both combatants shaking hands and then cooperating with each other on the armored defense mission.

The Duke and Deacon and  a large horseback posse ride up to New San Diego demanding the release and return of the “defectors” from their church/religion.  It’s a ploy to get into the city.  A squad of 10 Marksmen in heavily armored vehicles ride out to meet 70 of the Lone Star Rangers, who are armed only with pistols and no automatic weapons in an obvious mismatch.  Rather than parley/negotiate, the first shot gets fired and battle ensues.  But the Duke and Deacon manage to escape the massacre and retreat to their congregation who are fired up over the bloodbath and seem primed and ready to follow their leader  (which may have been the underlying plan all along).  Is everybody on the inside of New San Diego on the same side now?  Layers and layers.  Recommended.

OTHER TITLES WORTH EXPLORING THIS WEEK:

BATMAN, INC #8  - -  Some are dismissing this book as frivolous and insignificant.  It doesn’t matter to me if these events have no bearing in THE NEW 52 bat-future.  This is a fun and highly inventive book to read.  Isn’t that why we read some of these books?  Is that enough?  I say if the story is well written and illustrated and you enjoy it  - - then that should be enough.

BATMAN: DARK KNIGHT #5  - - Likewise, I am enjoying this book for similar reasons - - mainly to marvel at David Finch’s art.  When he is also the scripter it gives him full artistic license to experiment a bit with the illustration - - and I love that.

DARK HORSE PRESENTS #3  - - - For the money and the value it’s the best ongoing anthology title in the market.  Tons of good art and interesting storylines, many of which are being serialized.  Neal Adams’ BLOOD is just one of many.

FLASHPOINT PRESENTS PROJECT SUPERMAN #3 - - Ok, so almost every one of these FLASHPOINT 3 issue mini-series is an Elseworld tale under a different label.  As long as it’s a great story and entertains me, I can live with knowing that it will have no bearing on THE NEW 52 universe spin.  This is just different and exciting.

KILL SHAKESPEARE #12 OF 12 - - - Finally!  I’ve been waiting for the last issue so I can start reading this title from start to finish.  After picking up Issue #1 a long time ago and thoroughly enjoying it, I knew this was a story that would be served best at one setting.  Expect to see this reviewed from me in the future.

WAREHOUSE 13  #1 - -  based on the sucessful SCY-FY TELEVISION series.  Don’t know if this is going to be worthwhile but I’m going to check out Issue #1 to find out - - because I love the tv show!