BATMAN: I do love that official team logo

Jason Baker of Pittsburgh made the drive to Maryland to attend the BALTIMORE COMIC CON this weekend.  Was it worth the ride, Jason?  I think you’d say yes.  It was another great day of activities at the COMIC CON.  I spotted Jason wearing this cool team tee-shirt at one of the afternoon presentations and he was nice enough to allow me to take this photo. 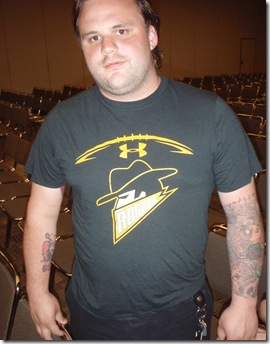 Jason is wearing a memento of his time spent as an extra on the set of the new BATMAN movie, part of which was filmed in Pittsburgh.  Heinz Field, home of the Pittsburgh Steelers, temporarily became the home of the Gotham Rogues football team for filming of an action sequence in which Jason was a crowd member.   The classic Pittsburgh buildings and tenements substituted for the architecture of Gotham City.  I can’t wait to see this film.