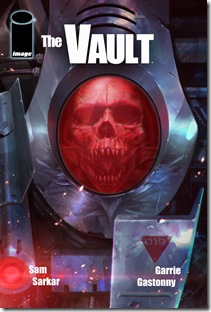 The story may be dark, but the art work on display here is blinding in its’  illumination.  I can’t believe the detail, especially the more difficult facial features in the close-up views.  Backgrounds, foregrounds, machinery details, landscapes and vistas - -  it’s all so photo-realistic.  Wow. I just had to start this off by talking about the great art to be admired in this series.  Now, on to the story . . . . . . . . .

The dark secrets of the treasure pit on Sable Island that were hinted at in Issue #1 begin to be revealed in THE VAULT #2.  Some secrets are better kept locked away and unseen, as the explorers find out.  At the end of Issue #1 a massive vault was hauled out of the treasure pit just as a furious storm/hurricane begins to threaten the island.

Naturally, the explorers who invested in the expedition want to open it immediately. Concerns are expressed that the contents might disintegrate if exposed to air, especially as the x-ray images indicate it may be skeletal remains.  Others feel that it can’t be human - - and the size, weight, density, etc. seem to indicate the contents are stone (like a statue) or metal rather than bone.  That would also seem to explain the metal rod inside what must be part of a sculpture.  The curious win out, and the “sarcophagus” is opened.  The contents seem too heavy to be a body, and are wrapped tightly in rope and hemp.  Once the wrappings come off, it does indeed resemble the skeleton of a large winged creature.

So, what do you think?  Does it come alive and start attacking everybody?  I’m not going to tell you everything.  THE VAULT is a genuine scare, even more so if you keep remembering the opening of Issue #1 with its implications of a Biblical and/or mythological threat on a grand scale.  Suffice to say that all the explorers agree it’s time for the rescue ship to come and take them off the island.  They seem to have escaped the threat  - - - for now.  Recommended.  Can’t wait for the ending next month. 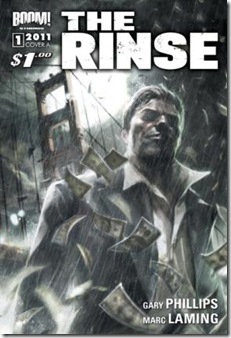 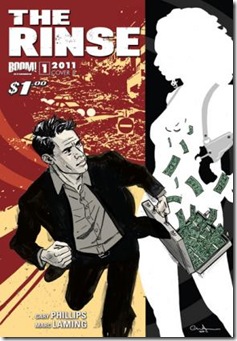 If you enjoy Ed Brubaker’s CRIMINAL stories, then you’ll want to check this out. Story and art are on an even par with the quality and style of CRIMINAL.  I’m a sucker for first person narration when it’s done well, and I was immersed in this book after five pages.  CRIMINAL often features engaging and sympathetic characters who just happen to be outlaws and crooks.  Jeff Sinclair in THE RINSE walks a similar path, dispensing his wisdoms and observations as he moves through the story just as if he was sitting beside you at a bar and sharing a great story.

The “rinse” involves methods to hide or “launder” large amounts of money through businesses where cash transactions “don’t raise a red flag” - - - art auctions, shell companies, banks and brokers, sports memorabilia, bars and restaurants, etc.  Jeff Sinclair of San Francisco is a master at moving and rinsing big sums for a variety of clients.  When he agrees to help someone new to stealing money from the boss help to conceal, hide and move that stolen cash around - - we see his soft side.  He knows he shouldn’t help but he also knows the client will get killed otherwise. For the boss is a big casino owner/mobster and he’s angry and hot on the trail.  I would like to see more so I’m coming back. 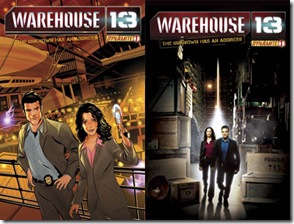 Warehouse 13 is one of my favorite television series.  It’s entertaining and amusing and creative. The collective group that maintain the warehouse of ancient mystical artifacts for the government and their agents (formerly Secret Service) who travel the globe to “snag, bag, and tag” any dangerous artifacts at large are funny, quirky and endearing.  The comic maintains that tone perfectly and is a great reading companion to the series.  The story is complete in one single issue and reads just like an episode of the series, including dialogue that you could visualize them saying.  Seismic disruptions that create enormous sinkholes that swallow neighborhoods seem to be created rather than natural, which sends Micah and Pete off to South America to investigate.  The art by Morse is a step above mainly functional (as some of these adaptations seem to go) and does justice to the actual appearance of the characters on the show.  You can even recognize them.  Well done.  I’m back for more fun next month.