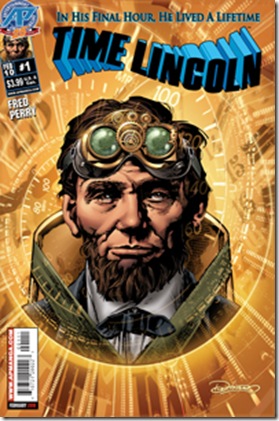 I remember seeing this title solicited in PREVIEWS and passing on it.  However, after seeing it resting on the new releases shelf at my local comics shop  (Captain Blue Hen in Newark, DE)  I was strangely attracted to it.  After being hypnotized by the cover I picked it up - - just another one of those impulsive buys that frequently result in new and pleasing discovery.  (This also serves as a testimonial for why we need to support comic shops - - I have them to thank or blame for this!)

The beautifully depicted steampunk cover by Brian Denham with a head shot of Abraham Lincoln as centerpiece forces you to pick it up and examine the contents.

From that point you are  hooked.  Once you view the contents and see the historical characters in futuristic yet outmoded Victorian garb and gadgetry (that’s steampunk for ya!),  all drawn in a manga style (but without the big eyeballs, thank you) you’ll want to read it.  It’s amusing and entertaining without consciously trying to be, just by its very nature.

As the cover blurb claims - - - “In His Final Hour, He Lived A Lifetime”  - - TIME LINCOLN reveals that Abraham Lincoln’s assassination could have been a fraud.  Minutes before then, he may have  escaped  into the time-stream to spend the moments before his death traveling throughout history in an effort to make changes for the betterment of the world.  Issue #1 takes place mainly within the historic Booth Theatre and sets the stage for adventures to come and introduces the main characters.

I get the feeling that this is a one-shot, trial issue to see if the sales numbers would support a limited or ongoing series.   I would certainly return for more.  The contents allude to some previous encounters that would make great story arcs.  The back cover hints even further, with a classic hand-shake meeting between Presidents Lincoln and Obama.

Without spoiling any major plot developments or surprises, the major villain attempting to manipulate the time stream is Joseph Stalin.  There is an interesting back story revealing his origins as a super-villain that includes a visit to Rasputin. Lincoln is assisted by an able quartet comprised of Albert Einstein, Benjamin Franklin, George Washington Carver and Sir Isaac Newton.

Fred Perry does a great job with story and art.  His drawing style has a manga influence but does incorporate a little more background scenery than is typical of this format.  His art has a fluidity to it that is fun to follow.  The fight scenes between Lincoln and Stalin are neatly captured in wide-screen and angular panels.   It’s nice to see him stretch the boundaries of his style (script and art) and experiment a little beyond his work on GOLD DIGGER, the title that along with NINJA HIGH SCHOOL from Ben Dunn  helped establish Antarctic Press.  (Although I have to admit that I haven’t picked up an issue of GOLD DIGGER since the early days, so I may need to adjust my impression.)   Please support this fine work from a smaller independent publisher.