While super-hero tales still continue to dominate the selection of current comics choices there seems to be an increase in the number of quality horror and dark fantasy titles.  My interest and appetite for such fare has been revived, especially after reading the new re-boot of CREEPY (getting much better as of Issue #2) as well as promising new titles like WE WILL BURY YOU.  I’m going to continue exploring new books and writing here about the ones worthy of your investigation. 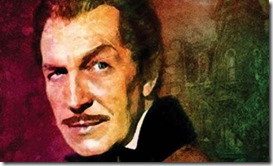 One book that caught my eye is VINCENT PRICE PRESENTS  from Bluewater Productions, their first ongoing series that began in mid-2008.  It’s an anthology of horror tales, featuring a single story each issue by some promising writers and artists.  The tie-in device incorporates a narrator to introduce and conclude each story ala classic comics like TALES FROM THE CRYPT, CREEPY, BORIS KARLOFF TALES OF TERROR, ROD SERLING’S TWILIGHT ZONE, etc.  The narrator here is Vincent Price, king of the ‘60’s and ‘70’s drive-in horror movies and a personal favorite of mine.

I’ve sampled three separate issues of VINCENT PRICE PRESENTS and found them all to be interesting and worthwhile.  There doesn’t seem to be a set writer or artist for the series and this helps to keep it fresh and different with each issue.  I’ll begin with my favorite of the three, the current issue that arrives in comics stores this month: 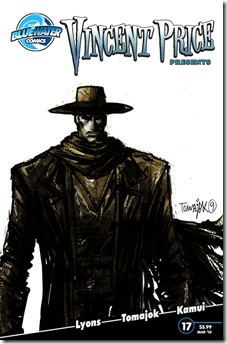 This is an Old West story with very dark overtones, like a hybrid of spaghetti westerns and stalker horror/gore fare.  The fear monger is a seemingly unstoppable and towering gunman with a grim berserker determination to kill (like Friday The 13th’s Jason and Michael from the Halloween films).   The story including flashbacks is presented very well and moves along at a rapid pace.  The art alone is worth the price of admission; and the color work here is breathtaking!  It’s a triple threat to thrill.

The Western-themed cover hints at the contents within.  It draws immediate attention with just the image of a lone wanderer in a long coat advancing towards the front cover.  He resembles the classic Man With No Name but those facial features look like Uncle Vinnie much more than they do Cousin Clint.

Yet, right away on Page 1 it appears as if someone else has taken over Vincent’s cover garb and is also assuming the duties of the narrator of this story.  A few panels later this same narrator seems to become the antagonist as he walks off the porch front and becomes the maniacal gunman who opens this story.  You are also pulled immediately into this story by the intriguing art and vivid colors.  There is incredible line work to admire in the details of the porch posts and backboards along with the numerous folds of the long coat, which appear to be lifted by high winds.  The color work throughout this issue is remarkable, particularly the use of various shades and hues of red and blue to indicate sorrow, trouble, fear, apprehension, peace, calm, and happiness.

The beginning flashback introduces the heroine Emily Scott and reveals the incident that brought her troubles.  Some time ago a crazed gunman broke into their home and killed her husband.  She and her young son survived thanks to the husband’s quick thinking as he hid them away just as the front door was broken in.  Haunted by the memory of this event, she moves to another town where she is still bothered by nightmares that revisit that terrible night.

One day while walking her son to the school house (the “Eastwood” School – nice little homage there) Emily spots the wanted posters for Soulless Sam, the subject of local conversation as he has been terrorizing nearby towns with his killing spree.  And her fears and apprehension begin all over again.  Just as she meets a kind local man who takes an interest in Emily and her son, the murderous gunman shows up in town and it’s a deja vu moment for Emily as her new acquaintance helps her hide while he positions himself behind a door to defend against the bloody predator.

Like all horror comics true to tradition VINCENT PRICE PRESENTS ends it’s stories with a shocker or twist ending.  I did not see the ending of this story coming - - yet it is a shocker and very unexpected.  There has been some outcry on some fan review sites about this story, accusing the writer of building suspense and then running out of ideas and not knowing how to end the story.  I think the ending is deliberate and I admire that.  It takes some bravado to defy the horror fan base and offer something different.  This is a great story with a neat little spin and true-to-tradition moral at the end.

Dr. Phibes is back! - - one of my favorite Vincent Price movie characters gets revived in this original story by Adriano.  It seems Adriano is also a fan, as this story is very faithful to the Phibes continuity and follows the same twisted path and dark humor of the two films.  The wronged Phibes is once again trying to find ways to resuscitate Victoria, his preserved wife and his life.  Just as he did before, he devises inventive means to murder and accomplish his purpose. 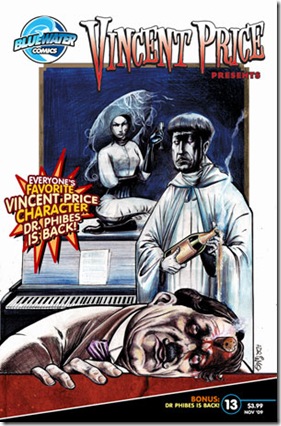 Another great cover helps set the tone and gives a good indication of the grim contents as well as the comedic undertones.  Murder by champagne bottle.  The victim is depicted as dead and surprised with the bottle cork firmly embedded between the eyes while a bored Dr. Phibes seems to bemoan the spilled champagne.

The opening page murder takes place back stage at a theater presentation of Jack And The Beanstalk.  As the panel art zooms in on a close-up of the soon to be dead main actor in his dressing room it passes a wall of playhouse posters, all heralding various productions that bear the names of Vincent Price movies (House of Usher, The Comedy Of Terrors, etc.)

Adriano’s art is fascinating, almost a hybrid of the styles of Ben Templesmith and Gahan Wilson with a painted look featuring a wash of colors and bleeding, dripping inks.  Adriano is also the colorist and compliments his line drawings appropriately.  It’s a delight to behold.  He also introduces a new character to the world of Phibes, the sinister and brooding Thanatos (many mythic themes throughout this story) - - the father of Victoria who disapproves of his son-in-law and appears to be aiding the inspectors.

I enjoyed this story and hope that Adriano returns with more adventures of Dr. Phibes.

Through the use of some clever Photoshop software or cropping/editing the photographic image of Vincent Price’s head rest neatly atop the formal dining gown attired figure that narrates the opening and ending of this story.

The story recounts the early days of a Neanderthal tribe as they encounter the first were-wolves and learn they are transformed family members.  The lead character is faced with hard decisions as he must battle and defeat his own brother in order to rescue his daughter, abducted by a fearsome werewolf in the opening pages.  In addition to being one of the earliest encounters to feature monsters, there is also a ghostly and inspirational presence.

Dialogue is kept to a minimum and relies on the art more to move the story along.  It’s very well done and the absence of word or thought balloons allows for more appreciation of the drawing and coloring.

There’s a cool twist to the ending of this story that made me smile. 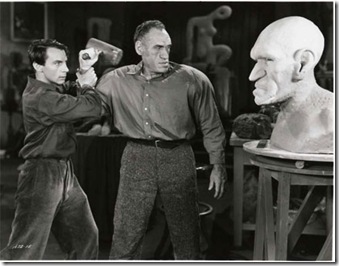 VINCENT PRICE PRESENTS has been nominated for a 2009 Rondo Hatton Classic Horror Award for Best Horror Comic.  The list of all the nominees and numerous award categories can be found at www.rondoaward.com.   Comics are listed as Category #21 and VINCENT PRICE PRESENTS will compete for the award with 12 other nominees, including THE ASTOUNDING WOLF-MAN, BEASTS OF BURDEN, THE COMPLETE DRACULA, and VICTORIAN UNDEAD.

The awards are named in memory of movie actor Rondo Hatton and the bust is an image of  The Creeper, one of the characters he portrayed.

It’s a really neat website so be prepared to spend some time exploring it.  You can also download an awards form and submit your choices as this is a fan-based award.  Voting is being conducted now through April 3rd.