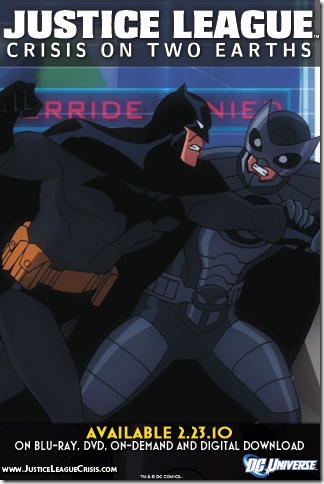 I just got through watching Warner Animation’s latest DC Universe movie – unfortunately, I had to be home sick with a fever to have the time – and it’s my favorite so far. Originally conceived by writer Dwayne McDuffie as the bridge between the “Justice League” and “Justice League Unlimited” animated series, this classic story of the Justice League vs. the Crime Syndicate has been modified to stand alone. (But if you squint, and pretend they used John Stewart instead of Hal Jordan, it still basically fits in the original continuity.)

McDuffie tends to think his sci-fi concepts all the way through, and I think his take on the “infinite Earths” concept will please even people who don’t normally like the idea. His take on it makes Owlman into perhaps the most nihilistic character in the history of animation. His Batman is pretty ruthless and scary too, and not afraid to make a surprising sacrifice for the greater good. The fight scenes are terrific too, and there are lots of cameos by both other Justice Leaguers and other Crime Syndicate counterparts.

The voice acting is, as always, excellent, especially James Woods as Owlman, Gina Torres as Superwoman and, surprisingly (to me, anyway) William Baldwin as Batman. I wasn’t as thrilled with Mark Harmon as Superman, not because there was anything wrong with his performance, but because his voice didn’t seem to get lost in the character – I pictured the real-life actor every time Superman spoke.

The 10-minute “DC Showcase” shorts make their debut here with “The Spectre”. It’s based on the 70’s version where The Spectre would wreak horrible (and often ironic) vengeance on the guilty. In a stroke of genius, it’s “shot” to look like a 70’s cop show, including “defects” in the film stock! “30 Days of Night” writer Steve Niles makes the horror scenes pretty brutal by 70’s standards but mild by today’s live-action film standards, and the daytime scenes are like a Raymond Chandler novel. I think the piece actually works better the less you know about The Spectre, so I don’t want to give any more away than that.

The opening scene of “Justice League” is maybe a little too violent for younger kids, but otherwise I don’t think there’s anything most of them couldn’t handle. (Although the subtleties of Owlman’s motivation may be lost on them.) “The Spectre” is basically a mini horror film, so younger and more sensitive kids should probably skip it.

Extras are fairly thin: there’s no commentary, and the one-disc version has features on all the other DCU movies including the upcoming “Batman: Under the Hood”. The second disc of the two-disc version has a documentary about DC Comics since “Identity Crisis” that I haven’t watched yet, and the usual two bonus animated series episodes.