In Search Of Horror 2 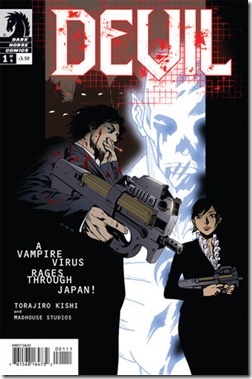 It wouldn’t be hard to justify labeling this as “horror”, “dark fantasy”, or “science fiction” as this complex and fast-moving story touches upon all three genres.   If you like vampire tales, John Woo crime/action films, and/or horror movies with seemingly indestructible monsters (as seen in ALIENS, etc.) then this book has something to interest you.

Whether DEVIL takes place in a future society or an alternate universe is unclear, and may be explained in future issues.  A new virus with vampire-like symptoms is spreading across the planet. It turns victims into “Devils”  = =  not exactly vampires but super-powerful blood suckers.  The lifespan of an infected Devil is just a few days but the virus is fast-acting.

Officers of the Special Investigations Unit “Devil” are instructed to apprehend victims of the virus and secure them in special institutions for observation and study in hopes of finding a cure.  The summary on the credits page mentions that there is a new and deadly strain of “Devil”, apparently derived from cloning experiments.

Special Investigator Takimoto is a classic anti-hero using his position in order to locate and take out victims of the virus, dispatching them handily with his over-sized gun.  There is a very artistic image of a classic kill-shot and his grim reaction in two panels on page five that communicates so much about this character without any dialogue balloons.  I love the shading and city background in the execution panel.  The art is very interesting, and reminds me of what some Vertigo crime books (particularly 100 Bullets) might look like if the artists were more manga-influenced.  (The adult version of manga, not the exaggerated cartoony style.)

Female detective Migiwa’s methods conflict with Takimoto’s.  She is more sympathetic to the victims and wants to get them to the treatment centers.  They both get called to a crime scene and confront one of the new ultra-powerful strains of Devil who seems to be able to slice through human tissue and car roofs with the blade of his hand.

As events in the first issue wrap up, the Devil and Takimoto seem to recognize each other and find a connection in the female victim, who reminds them of some illusionary goddess “Mariko” - - who detective Migiwa also resembles.   The plot thickens as the blood spills. 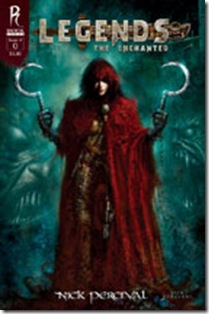 I realize that by writing about another book that seems to be more “dark fantasy’ than horror that I am not strictly adhering to any set rules.   While this clearly appears to be a fantasy creation, finding beloved storybook characters like Red Riding Hood, Pinocchio,  and Jack The Giant Killer inhabiting this dark world and either being victimized or partaking in the bloody violence is “horrific” enough for me.  If you consider FABLES to be an R-rated version of the classics, then LEGENDS merits an  X-rating - - no one under 17 will be admitted without parental escort and guidance.  Grim is too mild a word.   Those sharp bloody blades in each of Red’s hands aren’t anything that she pulled out of the basket that was going to Grandma’s house.  More likely is that those are on loan from Freddy Kruger’s tool box.

The story is creepy and intriguing. But it’s the art that is going to hook (or pig stick, and not let go) people into checking out this book.  It appears to be a mix of photo realism and painted imagery. The colors are rich and bleed and wash all over the place, especially in the backgrounds.  It’s very impressive to inspect.

If you like the work of Simon Bisley, you are going to be crazy for Percival’s art.  Every person looks meaner than hell, or about to be dispatched there as they writhe in pain (poor Pinocchio! – and he doesn’t look very friendly or safe either. )  The setting for these events seems to be a mixture of modern technology, steampunk (second time I’ve referenced that this month!) and the dark, shadowy, creepy castles and villages of yore (as long as you can accept Jack riding his motorcycle to get there).  Jack’s still dispatching giants.  Red Riding Hood’s still being threatened by wolves, but this time its a pack of grotesque were-wolf creatures.

LEGENDS THE ENCHANTED is a special edition $1.00 preview of the hardcover graphic novel, set to debut in April.  It’s a great taste of what’s in store, and should tease a good amount of comics fans to add this to their spring order lists.