Comics I Read: Catching Up #20 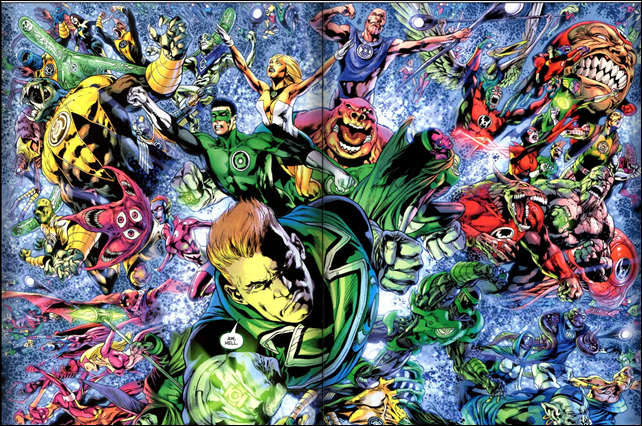 Blackest Night 7: There’s not a ton of plot movement here until the last few pages, but I really liked the twist on Orange Lantern Lex Luthor’s greed and all the other characterizations are great as usual. As to the ending, the revelation about the origin of life in the universe kind of makes my head hurt to think about but, as I (and to be fair a lot of others) predicted, a White Lantern does emerge. Johns managed to catch me completely by surprise by giving that role to an unexpected character. Well played, sir. The real star of this issue, though, is Ivan Reis. I don’t know if it was the extra time or what, but his work is even more stunning here including some amazing double-page spreads like the one above.

Black Lantern Green Arrow 30: This is a lot like many of the other recent tie-ins where the hero has to watch from inside as Nekron uses their body and memories to taunt their comrades, but what brings this to another level is that Ollie’s behavior doesn’t need to be twisted much: he has real secrets that would hurt his family if exposed. (Like the fact that he abandoned Conner as a child.) A good start from new writer J.T. Krul. I criticized his Titans issues, but he’s got a good handle on things here.