DYSFUNCTION AT THE JUNCTION 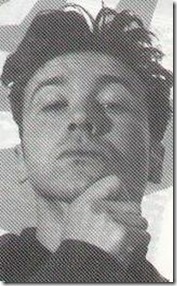 Peter Milligan earned his spot on my personal list of writers to watch some time ago.  With THE BRONX KILL, a tight little crime/mystery thriller about a family with some troubled history, he moves onto my even shorter list of crime writers to pay attention to.  The quality level falls in between the works of Ed Brubaker and David Lapham.  THE BRONX KILL builds suspense like the master Brubaker while the gritty dark side of human nature he details reminds me of Lapham’s hard-core tales.

For three generations the males of the Keane family have sought careers as policemen.  Each of them wanted to be a “cop” until Martin Keane made a decision to go his own way and pursue his lifework as a writer.  His father never approved and constantly belittles that decision, lecturing his son on the proper life choices at every opportunity.  When Martin returns home to introduce his fiancée at a Christmas dinner that remains the source of tension.

Along with a tradition of law enforcement in the Keane family is a troubling history of death and desertion.  Martin’s grandmother quit the family life very early, never to return and leaving his father to be raised by his grandfather and several aunts at the age of infancy.  In the opening pages of this book we learn about another dark moment in Keane history as two shadowy figures gunned down his great-grandfather (and namesake) in an abandoned lot near the Bronx Kill, a NYC river canal between Harlem and the Bronx.

Martin, a failing novelist whose second book was panned by critics, brings his girlfriend Erin, who bears a strange resemblance to his grandmother, to this site as the memories return while serving as inspiration for his third attempt at a novel.  He departs for Ireland for further research on the family, leaving Erin behind.  On his return he seems determined to get some of these troubling matters off his chest by incorporating them into his novel.  There’s a neat little plot device used by Milligan who scatters typed rough drafts of this work, including notes scrawled in the margins and underlined passages, throughout the story.

Things get even more complicated as Erin (now his wife) disappears and Martin becomes the prime suspect in the police investigation.  Martin’s search for her uncovers even more family trouble and his continued writing becomes even more personal and reveals his concerns and fears.  When he finds the answers the truth is more depressing and grim than his fiction. Trust Milligan to slap readers across the face with the disturbing reality. 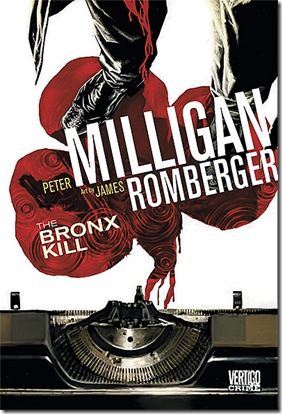 There is a nice flow to THE BRONX KILL as events unfold similar to a 1950’s or 1960’s classic grade-B black and white crime movie.  The art by Romberger perfectly compliments the style and mood and enhances the darkness of the situations depicted.

While I enjoyed the story as well as admired Milligan’s skill at defining his characters so that we understand them internally and externally I had trouble finding any to actually care about.  The more I learned about them the more distanced I became.  However, Milligan still managed to hold my interest as I wanted to keep reading and learn what happens.   While he skillfully depicts the dark side of human nature so well (GREEK STREET is another fine example), it seems as if Milligan is distanced from his characters.  It feels as if he is simply a very adept reporter/observer just doing his job by recounting a sad and sordid tale.  I get the same feeling when reading stories by Lapham.  Brubaker, on the other hand, makes me believe that he truly cares for his characters and that makes me feel similar sentiments.  When Milligan achieves that reaction with me then I will move him even further up my personal list of favorites.

At first glance the art of Romberger seems a little rough and simplistic.  But after several pages into the story that is forgotten as his true skills are revealed.  He is a master of the facial expression and body language and enhances the story the same way a film does for a novel adaptation.

THE BRONX KILL is a nice addition to the family of graphic novels in the Vertigo Crime series.  While it is very reminiscent of those crime films I mentioned the themes of this story would have been taboo in those black and white B-movie days.  THE BRONX KILL is certain to offend some readers.  Like a bad taste in the mouth, it will linger and disturb long after it is put down.  Once I lose that feeling, I’ll remember even longer the great entertainment value derived from examining Milligan and Romberger at their craft.