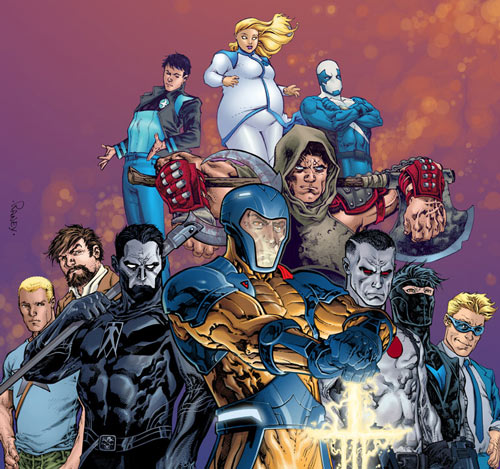 Valiant Entertainment is proud to announce that it has partnered with Catalyst Game Labs to produce role-playing and tabletop games featuring Valiant’s award-winning library of comic book superheroes.  The partnership will lead off in mid-2014 with the release of the Valiant Universe RPG—Valiant’s first-ever role-playing game, designed for the Cue System (the Origins and ENnie awards-nominated system first published in Catalyst’s 1950s Rockets/Rayguns/Robots RPG, Cosmic Patrol).  Subsequent releases, spotlighting a wide array of Valiant properties, will follow in 2015 and beyond.
The edge between superhero and villain has never been sharper.  In the Valiant Universe RPG, players will immerse themselves in a dark and gritty world where every mission and every battle has deadly consequences.  Whether playing X-O Manowar, Bloodshot, Shadowman or even the all-powerful Toyo Harada—or any of dozens of characters—Valiant’s most fearless heroes will unite for the first time in a roleplaying game, allowing you to join their stories and create new ones.  Whether you’re a longtime fan or brand new to the Valiant Universe, this is the only source you’ll need to bring Valiant’s leading characters to life in a fantastic superheroes setting.

“This is really a dream come true,” said Randall N. Bills, Managing Developer for Catalyst Game Labs.  “I’ve always been a comics fan—as are most of Catalyst’ employees—and getting the chance to publish great games within a fantastic comics universe is spectacular.  The fact that it’s Valiant, with its brilliant combination of heroic action and gritty realism, makes this all the more enjoyable.”

Valiant is a leading character-based entertainment company with a library of over 1,750 characters, including X-O Manowar, Bloodshot, Harbinger, Shadowman and many more.  Established in 1989, Valiant has sold over 80 million comic books, and today its characters continue to be forged in publishing, licensing, film, video games, and beyond. Since its summer 2012 re-launch, Valiant has returned to the fore as one of the most highly regarded publishers in comics, winning a 2012 Diamond Gem Award for Comic Book Publisher of the Year.  Just last month, the publisher announced Valiant First—a brand new publishing initiative primed to unleash a major #1 new series debut monthly throughout 2014, beginning in May with RAI #1—the first issue of an all-new ongoing series from New York Times best-selling writer Matt Kindt with fully painted interiors by superstar artist Clayton Crain.

“Catalyst is exceptional at what they do, and we couldn’t be happier to be working with a games publisher of their caliber on Valiant’s very first RPG.  With such a skilled an enthusiastic team at the helm, we have every faith that Valiant’s first foray into the world of role-play and tabletop gaming will live up to the expectations of our fans around the world,” said Russell A. Brown, Valiant’s President of Consumer Products, Promotions & Ad Sales.  “Catalyst is dedicated to doing these characters justice, and we look forward to giving our biggest heroes the gaming debut they deserve when the Valiant Universe RPG arrives later this year.”

www.catalystgamelabs.com in the future for more details surrounding these coming games.  For more information on Valiant’s award-winning library of characters,visit Valiant on Facebook, on Twitter, on Tumblr, and at ValiantUniverse.com.

Catalyst Game Labs is dedicated to producing high quality games and fiction that mesh sophisticated game mechanics with dynamic universes-all presented in a form that allows beginning players and long-time veterans to easily jump into our games and fiction readers to enjoy our stories even if they don’t know the games.
Catalyst Game Labs is an imprint of InMediaRes Productions, LLC, which specializes in electronic publishing of professional fiction. This allows Catalyst to participate in a synergy that melds printed gaming material and fiction with all the benefits of electronic interfaces and online communities, creating a whole-package experience for any type of player or reader. Find Catalyst Game Labs online at www.catalystgamelabs.com.