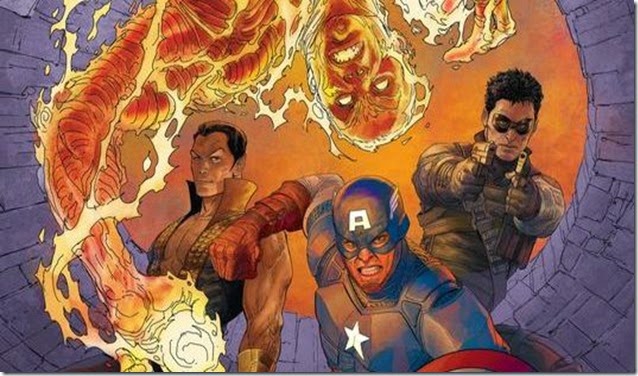 It’s so good to see the wonderful work of artist Steve Pugh on a monthly basis.  This new series intends to bring the World War II team of The Invaders to the modern world and base their new adventures there, with some occasional flashback sequences.  And James Robinson, the man who brought the formerly bland Justice Society to invigorated life at DC, will most likely achieve the same thing with this veteran team.  There’s already some nice developments and insights into the character of Jim Hammond, the original Human Torch.  I can’t wait to see what he does with Bucky Barnes before he turns to Cap and Namor, as well as the secondary characters that will certainly be part of this book. (He’s already introduced Major Liberty and Aarkus, the original Vision with more to be added later.)

The first story arc, titled “Gods And Soldiers” centers around the Kree and a plot to obtain a device that would make immortal gods submissive to their beck and call.  Namor gets kidnapped.  Everyone assumes the Kree want to enslave the Asgardians, but there’s a surprise in store.  Pugh’s art is worth dwelling on, and Issue #2 features a spotlight on Bucky Barnes that will recall some of Jim Steranko’s best work on Nick Fury, Agent of S.H.I.E.L.D.  There is also a new character introduced that bears promise - - Tanalth The Pursuer, a female version of Ronan The Accuser who may be even more powerful and ruthless. 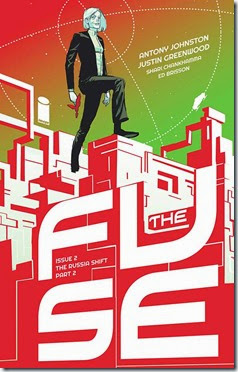 Issue #2 continues the murder investigation/police procedural on an outer-space station/community/city.  As suspected, there is a lot more to this title than a standard police procedural / murder investigation, albeit one that takes place on a space colony. There is a strange dichotomy developing between the two detectives as well as several sharply defined contrasts: old/young, white/black, female/male, veteran/newcomer.  Just to keep it interesting, the veteran female sergeant goes by “Klem” and she refers to her male detective partner as “Marlene” (last name is Dietrich – fans of 1940’s black and white cinema will get the connection).

The duo continue to investigate the serial killing of “cablers” (homeless) and some clues begin to materialize that lead them to the Mayor’s office and staff.  Politics rears its ugly little head, just to complicate matters.  Yes indeed, this book is getting interesting. There is a lot of story here.  It’s very well told, engaging, and beginning to get more intricate and complex. A real mystery worth following. 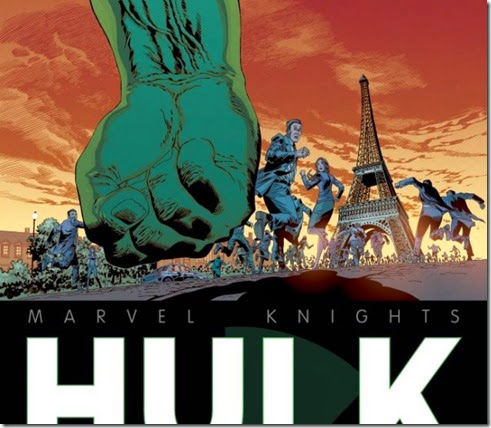 The very first thing that grabs your attention is the captivating art by Piotr Kowalski. He’s a real talent whose development should be fun to watch and appreciate.  Every issue has an awesome super-large panel stretching across two pages that really highlights what Kowalski is capable of.  The opening scene in Issue #1 of night-time in Paris along the river is stunning in its details, and perfectly shaded/colored.  Issue #1 ends with an equally effective, two-page mind-numbing-in-its’-brilliance explosion with colors that clearly indicate how much heat must be involved.  Issue #2 showcases a cool aerial view of a helicopter surveillance of a bomb crater.  And, you still haven’t seen everything until a massive version of the Hulk rushes headlong at you, the reader, as well as a swarm of hapless A.I.M. troops in the ending two-page spread.  Issue #3 opens up by zooming in on the ending scene of last issue where you can see the steam rising from the fury burning inside the Hulk’s head.  Issue #4’s imaginary sequence with Hulk standing triumphant over some mighty prominent heroes is poster ready.  And it all ends with a two-pager as equally impressive as it began.  I’m reminded of the classic Hulk work done by Herb Trimpe, imaginative and captivating.

The art alone is enough reason to pick up this mini-series.  However, the script by Keatinge is original, clever, and just as engaging.  This story gets my attention the same way as the best scripts of long-time Hulk scribes Peter David and Greg Pak.  The only gripe I have with MARVEL KNIGHTS: HULK is that the covers are so boring.  They only feature art on the top third of the page.  When you scrunch it down that much, it loses its effect.

The story starts out as a mystery with a bewildered Bruce Banner lost in Paris, France.  Dyane, an engaging young woman (great character, too bad there wasn’t enough of her in the following issues) rescues Bruce from a near-death situation, nurses him back to health, and then gets embroiled in a search for Banner by dark forces.  I don’t want to give away the details but you can look forward to some gamma-enhanced gargantuan killers, as well as a cool sub-plot by some ingenious upstarts within the A.I.M. organization. Naturally, the Hulk fits into their plans - and you will see him utilized in new ways.  The story is grim and gritty, as befits the Marvel Knights template.  You won’t be sorry if you pick up this series. 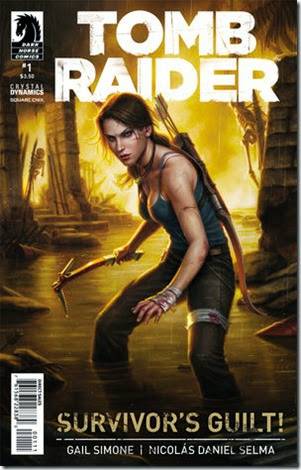 The Lara Croft character portrayed in this new series reflects the same changes made to the video game version of her: younger, less confident and all-knowing, and more accurate in physical proportions.  She’s still a babe, but not with exaggerated endowments and also minus the extra-short shorts.

Writer Gail Simone introduces escapist-type action right from the get –go and doesn’t let up at all.  During the proceedings she manages to insert enough back-story to build suspense, hold interest, and also reveal more character depth.  We learn that the new Lara Croft is a real team player who tries to look out for her comrades and cares deeply about their welfare.

Lara and the other surviving members of an ill-fated expedition to the island of Yamata are plagued by disturbing dreams that revisit the site.  When one of the members, Jonah the cook, reaches out to Lara she comes to his hideaway in the American desert only to find that no one can hide from the otherworldly inhabitants of the island who want their tokens back.

The art by Selma is clean and crisp, uncluttered by excessive background detail, which allows him to focus on the characters.  However, his action scenes are very well done and he utilizes white space between panels to good effect.  TOMB RAIDER is a good debut effort.