Just in time to ride the hype from the upcoming Superman movie, DC has published two classic Action Comics arcs in one big trade.  Collecting ACTION COMICS #844-846, #851, 866-870, and ACTION COMICS ANNUAL #11, this trade covers some of Geoff John’s best arcs from his time on the title. The first arc covers the escape of General Zod from the Phantom Zone with Richard Donner co-writing and drastically re-imagining the second Superman movie. The second arc reinvents the Brainiac character as he attempts to destroy Earth.
Although I’m not a fan of Big Blue, Geoff Johns teaming with Richard Donner is not to be missed and when paired with Kubert art, you know the book is going to be gorgeous. 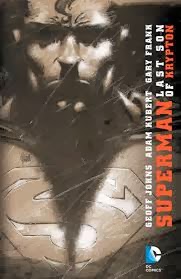 The storyline in the first arc begins with the appearance of a starship crash landing to Earth.  The only occupant of the small ship is a young child who seems to be Kryptonian in origin. Superman barely has time to put glasses on the child to hide his identity before he learns that this kid is actually a pawn being used by those in the Phantom Zone to enable their escape. The story seems to jump a bit with a flashback issue in the middle (likely collected out of order) but otherwise does a good job of re-purposing the basic plot of Superman II for an exciting arc.
The second arc was my favorite with a total re-imagining of the Brainiac character, implying that he was responsible for the destruction of Krypton.  Always an intelligent character who lacked brawn, this Brainiac gives Superman a run for his money on all fronts. The tail end of the story comes with an epilogue that leads directly into a major life event for Superman and is sure to tug at even the most jaded fanboy’s heartstrings.
The art in this book is clean and detailed. The ugliness of how Bizarro is drawn compliments the main character well. Brainiac also looks great sporting a totally new character model.
The only major issue I had with the book (primarily the first arc) was that the panels often crossed pages making the art on the crease very difficult to see without breaking the spine of the book. This seemed unnecessary in most instances and made the book harder to read. Jimmy Olson’s head also occasionally looks like the Joker when his face is absurdly elongated but that’s a rare departure for the book which seems to pay attention to scale in all other aspects.
Although the second story outshines the first, both are excellent arcs that even a Superman novice can pick up and enjoy. The art is beautiful throughout and the emphasis on facial expressions reminds you what separates the A-list artists from the rest of the pack. Despite some small missteps, this trade is definitely worth picking up in time for the movie and very reasonably priced given its heft.
Final rating (out of 5):