THE AUTEUR #2  (ONI PRESS, April 16,  2014 release date)  Written by Rick Spears.  Illustrated by James Callahan. Colored by Luigi Anderson.  Lettered by Sick Rears (ha!)  - - - Publisher’s Disclaimer = The Shocking Scenes You Are About To See Are Not Suggested For The Weak Or Immature. 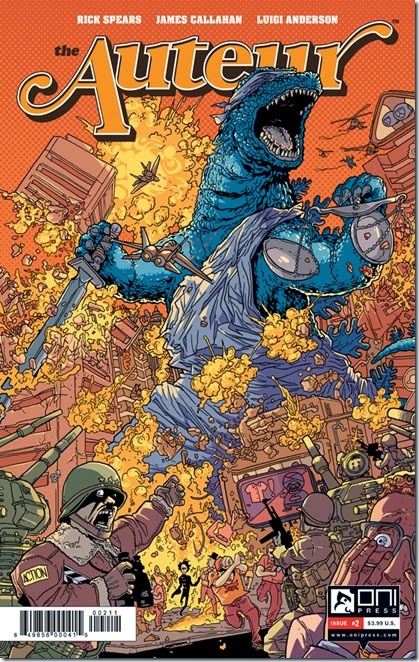 (Editor’s Notes:  It’s rare to find a comic that combines humor and satire and does it well these days.  The list is very short - - say, just THE AUTEUR and TODD, THE UGLIEST KID ON EARTH.  I can’ think of anything else that hits the mark like these books.   For that reason I want to give lovers of good satire a heads-up notice to get their order in today for THE AUTEUR #2 before the opportunity ends this week.  Issue #1 is close to selling out in stores, and since smaller publishers determine their print runs based on advance orders, we need to get the word out about this book so everyone who might enjoy it gets their chance.  The kind folks at ONI PRESS provided me with an advance copy so I could write this review. However, my request for a bag of money was never even acknowledged. I’m doing this strictly for the love, like all the other reviews you read here.)

DECEPTION IN MODERN MARKETING NOTIFICATION:   Please note that this is not a new issue of KING OF THE MONSTERS.  Godzilla does not appear in this story anywhere and his image on the cover is purely coincidental.  Rather, it is meant to symbolize the train wreck of a jury trial that occurs in Issue #2.  It’s as if Godzilla traded places with that blind folded armless lady statue who holds the scales of justice.  You appreciate the symbolism, don’t you?

It’s good that I was alone at home while reading THE AUTEUR #2, so nobody had to see or hear me laughing out loud in a hysterical fashion.  However, the family dog did look at me funny and then quietly stole off to the secure confines of her pet crate.

I previously wrote about THE AUTEUR #1 on these pages and you can re-read that review here if your memory is short or your recall just escaped in the bubble of that last mind-fart . . . . . .

In ISSUE #2, desperate film director Nathan T. Rex follows through on his brainstorm idea that ended the last issue and seeks to hire a noted serial killer as a “murder consultant” on his upcoming slasher exploitation  flick called “President’s Day.”  The issue opens with two quick satirical looks at satanic cults and college sororities (do you see the link there?).   That segues into a flashback scene depicting the gruesome murder that led to the arrest of the X-faced serial killer Darwin.

This leads to a prison meeting between Darwin and T. Rex, where he is persuaded to allow T. Rex to represent him when his case comes up to trial.  Meanwhile, the news media is already having a field day with the latest developments on the President’s Day film.

Obviously, the prosecution objects to the sudden interjection of T. Rex in a funny scene that just gets more ridiculous and hilarious as it moves on, and will remind many readers of the mechanisms of the modern justice system.

Prosecutor: “Objection!  He’s not even a lawyer.”

Judge:  “Let’s see.  Mr. Rex . . . we have  a law degree from the Legal Eagle Online University and a State Bar license dated . . . yesterday.  However unorthodox, these look legitimate.”

The defense employs a classic theme from the other celebrity named Darwin (“Survival Of The Fittest”) and also does a fine job of pointing out the detrimental character flaws of the murder victim in order to sway the jury to his point of few.   I never thought I would be persuading someone to purchase a comic book by telling them that the biggest part of the issue is a court trial.  How exciting can that be?  (When you stop laughing you can tell me.)   There’s also a gratuitous fantasy/dream sequence thrown in the middle to placate the other side of our brains, where we learn another cool meaning for the acronym ATM.

As you might suspect, Darwin is freed and begins his new role as murder consultant on the film.  Of course, from his point of view everyone and everything is visualized as his next bloody victim. His first piece of advice makes a lot of sense - - get rid of the mask.

Darwin:  “It’s stupid and limits your vision and hearing.”

T. Rex:  “Okay, sure.  But obviously we need the mask.  It’s kind of a genre thing and it looks great on the poster.”

The art by Callahan is as bold and brilliant as ever, and this issue his style reminds me of both Mike Wolfer and Geoff Darrow - - both very appropriate influences considering the subject matter here.