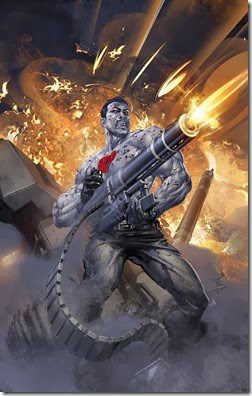 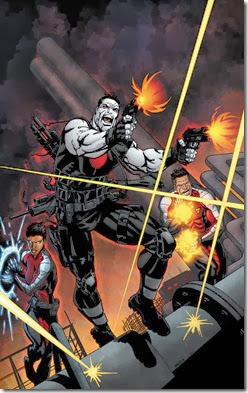 So impressive is this issue that I offer BLOODSHOT AND H.A.R.D. CORPS #19 as Exhibit A evidence in answer to the question “Why should I read any Valiant books?”  The answer is that they consistently pack a full load of story and character development into every issue and accompany that with very good art.  It’s a one-two punch that satisfies without pain.  All the Valiant titles are reader-friendly enough that you can pick one up at random and find an engaging story to follow without confusion.

Following up from the events in Issue #18, deposed Project Rising Sun director Simon Oreck’s Specialists team beats current CEO Morris Kozol’s H.A.R.D. Corps team in a showdown and snatches co-leader Charlie Palmer, Genius and Flatline.  Oreck’s game plan is to harvest a brain implant from Palmer and build a private army.  Genius offers his younger body/brain in exchange for the others’ freedom, and the story takes off from there in several very big ways.

The remaining H.A.R.D. Corps members plus Bloodshot are much more organized that the divisive Specialists team who are attempting to track them down.  The Specialists team of psiots (natural powers) has dissension in the ranks, and Chernobyl is isolated since no one wants to work beside him.  H.A.R.D. Corps (downloaded powers) are unified through their objectives, and separate to divert the Specialists while some members try to sneak into the building and rescue their CEO and team partners.  Bloodshot is confronted by Sharpshooter and Big Boy, and has to resort to cheap tricks and dirty fighting.  Vagabond meets the highly toxic and radioactive Chernobyl.  Instead of fighting it out, Vagabond contacts the Lifeline program and has some unusual powers downloaded into his brain.  Chernobyl is sedated and subdued not by force, but through smoking a joint while exchanging sad life stories where we learn the back-story of both of these characters.  are equally interesting power downloads occurring in this story as one team seeks to out-think the other.

There is similar character insight throughout this issue, as more is revealed regarding Vagabond, Simon Oreck, and Charlie Palmer.  I am very impressed by the writing team of Gage and Dysart.  The writing and the pacing is crisp, engaging and extremely revealing.  It’s hard to believe how much detail and background gets crammed in around all the action.  They are quite the team.

Make no mistake; there is plenty of action in this issue.  Bart Sear’s art is very dynamic, and the use of overlapping panels without dialogue ensures that none of the battle action gets overlooked.

Some readers who have been following this title since the early issues may be wondering why they should keep following Bloodshot after recent events.  After all, he’s regained access to his memories and a lot of confusing history has been cleared up, while he seems to have his current situation under control.  Yet, he still appears conflicted and at his core he remains a loner motivated solely by self-preservation more than anything else.  He’s given an option here and may surprise you with the choice he makes.  Don’t be surprised if he defaults from H.A.R.D. Corps at some point, in spite of the title on the cover of the book.  As the book says - - “Get Some” of Bloodshot and current company now. 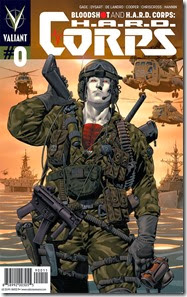 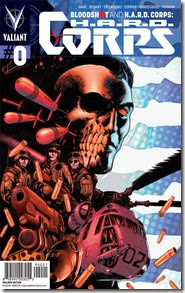 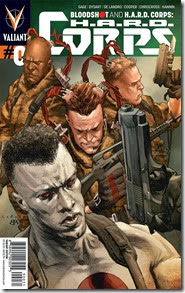 Fans of H.A.R.D. Corps will want this #0 issue for future reference purposes.  It offers a good amount of background information on the group and gives a revealing indication of the ulterior motives and machinations behind the Project Rising Sun (PRS) organization.  Central to all three storylines are the head scientist Arthur Kendall and CEO G. T. Prescott, whose two separate work philosophies first mesh and then become further apart as they experience life working for PRS. 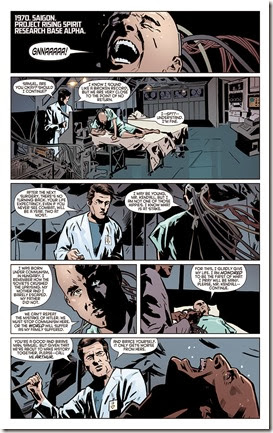 The story centers around the activities of PRS at a 1970’s research station in Saigon; and covers the following five years in the development of H.A.R.D. Corps man Samuel.  By the time he reaches his fifth year of downloaded abilities, it has taken a tremendous toll on his body.  He only 25 years old, but bed-ridden, pale and frail and in his last days.  He out-lasted all the other recruits, whose original life expectancies were only two years.

Flash forward ten years to the second generation of H.A.R.D. Corps in 1985 at another research center in Ft. Worth, Texas.  Recruit Garrett Dupree, now in his fifth year, is finding it hard to balance family obligations with obligations to PRS.  He shares his intentions to resign with hard-nosed C.E.O. G.T. Prescott and meets with resistance.  The same problems occur for recruit Rosie, who was promised a cure for her son’s crippling cancer.  They try to revolt and learn that PRS treats the corps as weapons first, and never considers the human or family aspects.

The last vignette occurs in 1993, when current senior leader Charlie Palmer was a recruit and trying to keep an affair with another member from prying PRS eyes.  When the programming in a member becomes out of control, the remaining H.A.R.D. Corps crew are introduced to the newest PRS invention in Bloodshot.  While Palmer gets Lifeline to download Suggestion mode so he can negotiate with the renegade member, Bloodshot does what he’s been trained to do and resolves the matter quickly.  It’ the beginning of the end for Kendall and Prescott’s tenure, and the start up of Simon Oreck, his dismantling of H.A.R.D. Corps and the rise of Bloodshot and the Specialists team.

As Kendall reflects on the past 30 years of work and how his good intentions were manipulated we get a truer picture of the motivations of the parent organization.  It’s a neat bit of history, all wrapped up in 23 pages.  Consider it essential reading for Bloodshot followers.

The three separate but nevertheless connected story threads are illustrated by different art teams. It’s a nice way to set each story apart, and it’s done is an unobtrusive manner. All three art styles are close to each other in look and feel and only differ in subtle ways.