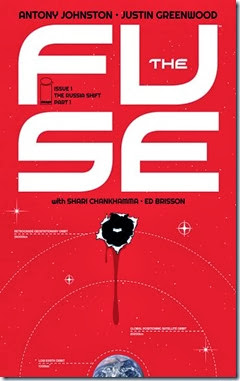 That is exactly what readers will find within the pages of THE FUSE.  All good detective stories use their opening chapter or chapters to set the stage, introduce the main players, and reveal the conflict or problem.  Everything is devoted or concentrated on getting the reader engaged, eager and willing to keep turning the pages to find out what happens and how everything gets resolved.  That is exactly what Johnston has done within Issue #1, subtitled The Russian Shift, Part 1.

However, there is a lot more to THE FUSE than a simple crime story in an outer-space setting. The opening issue raises many questions that make it worth following this book to learn the answers.  I also sense that there is more depth to this story than Issue #1 can indicate.

For example, what is the main purpose of this huge space station (shaped like a boom box) floating within Earth’s orbit?  It’s described as a tourist destination as well as a refuge / final destination for those down on their luck or looking to get away from something from their past.  Are all projectile weapons banned from use because the outer layer of the station is vulnerable to puncture, or is there some other reason?  Why are the homeless (yes, this st 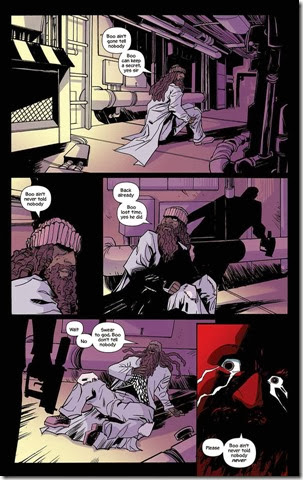 ation is like a large city and some citizens are below poverty level) referred to as cablers? (Is it because they dwell among the pipes and power conduits that run through utility tunnels behind the scenes?)

Will the newly-formed team of detectives bond or fragment?  There certainly seems to be a lot of discord, tension and doubt lurking beneath the wise-cracks and insults that they exchange back and forth.   Veteran detective (and also past retirement age) and Russian migrator Klementina Ristovych already has a hard-nosed reputation as an aloof member of the meager police force that prefers to work alone.  She also looks more like a man than a woman, with dark, drab clothes, no make-up and stringy hair.  Contrast her with new partner, Dietrich, a black 28-year old male with a good track record on the German police force who actually volunteered for the homicide assignment in space. When Klem questions his motives and probes for a reason, he gets sensitive and quiet when she implies it’s a problem with a woman.    Cablers keep turning up dead on the streets, and there seems to be a mysterious shadowy gunman behind it More mystery, crime and detection to follow.  This book has some promise, and shouldn’t be so readily dismissed. 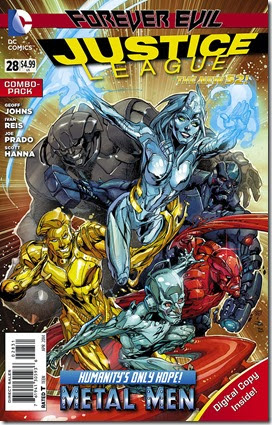 In the early days of my discovery of super-hero comics,  there was one title in particular that really stood out in the drugstore comics spinner rack, and that was SHOWCASE #38 (1962)  featuring The Metal Men.  I was hooked, and tried to pick up every issue I could find.  That was not an easy task in those days for two reasons 1) I wasn’t old enough to drive yet and depended on car trips with Mom or Dad, and 2) There were no comic book stores, just the stray drug store or supermarket news stand to find your comics.

That three-issue run led to the METAL MEN title debuting in 1963 and publishing 56 issues on an irregular basis until the final issue in 1978.  I had stopped following the title long before that.  There were no further Metal Men stories until Volume 2 in 1993, which lasted just one year.  A mini-series in 2007 also failed to revive the team.

This issue of JUSTICE LEAGUE is a tie-in to the Forever Evil crossover event, and is dedicated to introducing the Metal Men to a New 52 audience.  Writer Geoff Johns is respectful of the original characters, and they are just as much fun as I remember them being.  The work of the art team is gorgeous to look at, and they do a great job of detailing the team in action.  The colors are vibrant, as you might expect from characters formed from various metals = Gold, Tin, Lead, Iron, Mercury and Platinum (the sole member in feminine form). 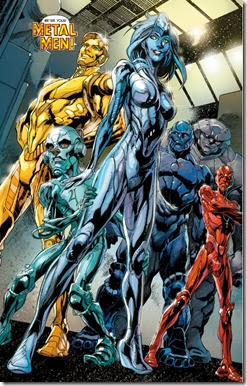 Cyborg attempts to enlist the help of Dr. Will Magnus, creator of the Metal Men, to replace the missing-in-action Justice League and help stop the grid that took them out. Dr. Magnus, is reluctant to do so as his creations went down in action on their very first mission, which is retold in flashback.  Naturally, Cyborg is persuasive and Issue #29 promises to feature them in the conclusion of this side-story.  With any luck and a favorable reader response, this may be the beginning of a new tenure in the DC universe for the Metal Men.  More than just robots, the Metal Men are living, emotional and responsive forms of metal given life (and heart) through a “responsometer” that also allows their forms to become flexible, fluid, and malleable.  With federal funding, Dr. Magnus created them to “perform search and rescue missions in toxic environments too dangerous for human beings.”  However, as he soon learns, the military “paid for the Metal Men because we need a team that can go in and out of dangerous environments, whatever those may be and for whatever task is at hand.”