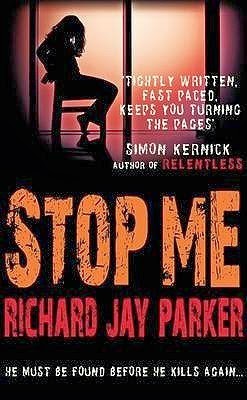 STOP ME
by Richard Jay Parker
Trade paperback, 320 pages
Allison & Busby, publishers
January, 2010
The premise is different.  A serial killer sends emails to family members of his victims, suggesting they forward it like a chain letter to ten recipients.  If the chain email finds its' way back to the killer, he will spare the victim.
Eleven women have died.  When Leo Sharpe's wife is abducted from under his nose and he receives the Vacation Killer's email - - he gets frantic.  He turns into an obsessive compulsive as weeks and months go by and his wife's body never turns up.  Is she still alive?  Was she spared, perhaps because the chain email got back to the serial killer?
This book kept me guessing right up to the end.  I was totally baffled.  It went in several directions I never expected.  Just when you think you can predict where this will go, RIchard Jay Parker puts a different spin on events.
As Leo Sharpe continues to try and find answers, he encounters several unsavory characters who claim to help, but are after their own personal gain.  The ability of the Internet to link all sorts of individuals with strange tastes and preferences is explored, as well as spot-lighting those who profit from catering to the same.
At times I was disgusted but never bored while paging through this book.  The ending provides a satisfactory closure.  You must read it or I will email you!   Highly recommended.
﻿
﻿
﻿