The first presidential primary occurs later this month in the state of Iowa.  On the Democratic side of the slate Barack Obama, the incumbent President Of The United States, will likely be the only choice to make.  However, on the opposing side there will be multiple choices and the beginning of the process of elimination that will bring us to the most logical candidate to represent the Republican party when the 2012 Presidential race really heats up. 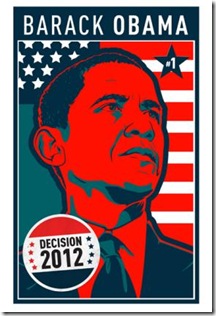 I like what BOOM! Studios has done to help create awareness of the many candidates, biographies in comics, comics in general, and BOOM! in particular.  Back in September when PREVIEWS was soliciting comics orders for November 2011 BOOM announced that they were initiating the first comics political straw poll to coincide with the Iowa primary.  A comic book  biography would be created and made available to order for every single known candidate for President at that time.   BOOM would tally the pre-order results and declare an official winner of the straw poll - - the single book with the most advance orders.

I’m sure they have been aware of the winning candidate for some time now, and are probably waiting for the appropriate moment to make their announcement.  In the meantime, the first of these books debuts this month and is worth your attention.  If all the books in this series that follow are as well done as DECISION 2012: BARACK OBAMA then BOOM! has completed a very worthwhile service. . . . . . Why? . . . . . Glad you asked!

This book presents a very complete and concise capsule summary of everything you would want to know about the candidate Barack Obama.  The storyline covers his upbringing, background, education, job and service history and also summarizes his political career – touching on the key points of his time in the Senate and also the Oval Office.  What I like best is that all the material is presented factually and objectively, without any editorializing or endorsements.  BOOM! gives you some facts and information.  You are free to make your own decisions.

Perhaps beyond the simple fun of seeing which title had the largest pre-orders in the straw poll, BOOM! is also providing a secondary service - - - they are providing a nice outline of the candidates to Comic Nation in the format that Comic Nation prefers.  It’s also a very friendly format for younger readers to learn as well as a way for younger voters to get involved and learn more as we approach the critical election days of November 2012.

Obviously, since these books were put together many months ago, we will see some titles about some who have either already dropped out of the race or have yet to declare their candidacy.  That’s a small price to pay in order to have these books come out at exactly the right time.  Still to come are DECISION 2012 issues featuring Ron Paul, Michele Bachmann, Sarah Palin, Jon Huntsman,  Herman Cain,  Mitt Romney, and Rick Perry.