By Jeff Metzner - November 01, 2011
Of the New 52 titles I'm still reading, my reaction to the second issues was much the same as the firsts, but here are a few that changed my mind and/or surprised me in some way.


Action #2 & Superman #2: I liked both of these better than the first issues, now that we're getting a better sense of who this guy is (especially in Action). In Superman, I also appreciated that General Lane was played more as a guy who kinda has a point instead of a mustache-twirling villain.

Aquaman #2: The novelty of the "underdog superhero" isn't going to last forever, but I like the way Johns uses it to play up Arthur's humility. ("I'm happy to teach them.") The art, again, is stunning: one of the best-looking books in the whole line.

Firestorm #2: Something interesting happened with this issue, where the printed version did not reproduce properly but the digital version was perfect. Seems like not a huge deal at first glance, but I think we'll look back on it someday as a watershed in print vs. same-day digital comics. The digital pages are free from the limitations of real-world color reproduction, so they can always look like the artist intendend and even (theoretically) be corrected after the printed book ships. (And it's a great story, of course, even better written & drawn than #1.)

Hawk & Dove #2: Passed. I'm done giving money to Liefeld because he was awful to a friend of mine recently. (A person who was a fan, not a critic.) Yeah, that may seem like an insignificant protest, which hurts Rob minimally and also has Sterling Gates as collateral damage, but I'm constantly telling people that it doesn't matter if you complain about a title online. The only thing that matters is whether sales go up or down, so it's time I practice what I preach. And there are so many good books out there now that I don't feel too deprived giving up a writer and some characters that I like. As an alternative, here are some other titles where your support would probably mean a lot to the creators (and they haven't encouraged their fans to hate on anyone that I'm aware of): Roger Langridge's "Snarked!" (Boom!), Nate Cosby's "PIGS" (Image), Greg Pak's "Dead Man's Run" (Aspen), and Jay Faerber's "Near Death" (Image). (Faerber says he's also writing for the CW's "Ringer", which is kind of a shame because every character in the show is an idiot. Though I keep watching it, so they must be doing something right.)

Red Hood & The Outlaws #2: I like this book. I liked the first issue too, even though I criticized the handling of Starfire. Now Scott Lobdell's doing interviews saying Kory was being "sarcastic" in #1, and that of course she doesn't have a "Finding Nemo" memory. That's great, Scott, I'd love for Starfire to be the smartest character in this book, and it's awesome if that's what you intended all along. But here's the thing: I only can go by what's on the page. I can't read your mind, and I shouldn't need to read your press. And there's no indication in the dialogue or the art in #1 that Starfire's not being genuine. So please don't talk about the people who (mildly) criticized your book, but are still buying and enjoying it, as if we don't "get it". We're not the ones who didn't do our jobs properly. And no, I don't think this is the same thing as judging a story before its ending, which I'm usually not in favor of. (Is this post getting a little ranty? I feel like maybe it's a little ranty.)

Justice League #2: Maybe it's just that I'm comfortable with the relaunch now, but I liked this a lot better than #1. In the larger group, Batman seems more like a leader than a jerk. It's also nice that the Hal/Barry friendship still exists, and I loved that Batman pegged Barry as a cop right away.

Blackhawks #2: There's some slight hope here, with a subplot about the covert ops team being revealed to the world. That would at least be an original spin on the G.I. Joe idea that the "real" G.I. Joe comic can't do, but if this book is going that route they're inching there very slowly.

Men of War #2: Oohhh, now I get it. This is the military version of "Gotham Central". Sold. 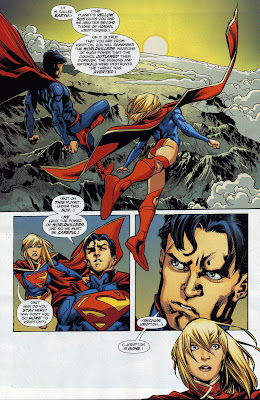 Supergirl #2: Better than #1 (which I liked). I thought they did a good job of showing Kara's disorientation, and I actually felt something when she learns that Krypton is gone. Which is a huge accomplishment, given that it's information that I've known basically my whole life.

Legion Lost #2: This absolutely should have been issue #1. I wasn't as bothered by the frantic pace of #1 as most people were, but this issue is far more thoughtful and lays out the characters and premise in a much more understandable way. Hopefully the chaotic opening wasn't a fatal mistake for this book.

Voodoo #2: I kind of like this a little less now that the title character (spoiler) has returned to her original form. I was hoping she'd kill her way from one identity to the next each issue, like a murderous version of Deadman. (Yeah, that doesn't sound so sensible now that I say it out loud. Never mind.)

On the DC animation front, an ending and a beginning. The last couple of episodes of "Brave and the Bold" air in November, and I will miss it a lot. The last season has been especially awesome because Superman and Wonder Woman became available to the show, and the fact that they were nearing the end -- 65 episodes is standard for kids' cartoons for economic reasons -- seems to have emboldened them to use every wacky Silver Age idea they could think of, like this Alfred vs. Luthor bit below from "Triumvirate of Terror!". The series finale "Mitefall!", starring Bat-Mite and a surprise guest star that I will not reveal here, airs on Nov. 18, and afterwards I will be sad. Bruce Timm's new Green Lantern animated series has an hour special on Nov. 11, and then premieres in the spring. I was concerned about the CGI animation being stiff like "Iron Man: Armored Adventures" is, but the opening scene looks remarkably smooth. "Young Justice" also continues to air new episodes this fall, and is an excellent show. (And YJ doesn't just feature the junior characters; one of the most recent episodes had 42 DCU characters in it, including the JLA, a surprise JSA cameo, a Secret Society of Super-Villains and even Milestone's Icon & Rocket!)


In other Green (actually Red) Lantern news, an Atrocitus & Dex-Starr preschool playset exists. I have seen one with my own eyes. (Oddly, there were no pictures of this online until recently; I originally saw it on the back of another package in the store.) And hey, guess who spent too much on Legionnaire action figures!

Lastly, from the "they reviewed it so I don't have to" department: Peanuts expert Nat Gertler takes a detailed look at the Peanuts comic out this week, and Star Trek author and friend of the blog Allyn Gibson reviews Star Trek/Legion of Super-Heroes #1.