THE HORROR HUNTER: With classic monsters, retro FLESH AND BLOOD Hammer-pounds the fear !!

The advance solicitation in PREVIEWS for FLESH AND BLOOD and its promise of an original graphic novel that paid tribute to the classic Hammer horror films was more than enough to get my attention. 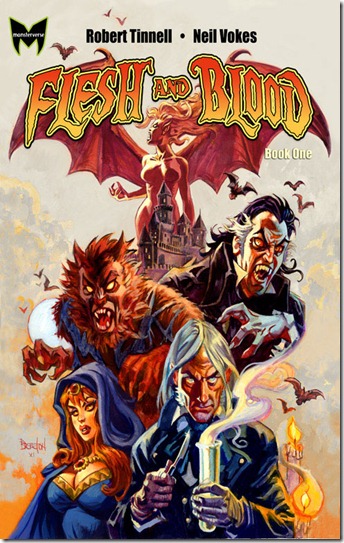 Next, the text introduction to FLESH      AND BLOOD, VOLUME ONE really engaged all  engines of the hype machine to red line high pressurization.  The intro, written by Tim Lucas (editor of VIDEO WATCHDOG) makes repeated reference to the Hammer legacy.  Lucas claims that FLESH AND BLOOD is “nothing less than the epic Hammer horror film that generations of fans have yearned to see . . . .”  and he calls it “the wish fulfillment of Hammer’s fan base.”   It’s a great prelude to the graphic novel itself, but left me a little apprehensive - - wondering how FLESH AND BLOOD could possibly measure up to those expectations.

FLESH AND BLOOD VOLUME ONE does not disappoint.  Page after page, panel after panel, the script and art deliver on the promises and praise of the introduction.  And it’s only just beginning.  After an exhausting and chilling start, there are three more volumes to follow.  This is an epic saga, and I wonder in delight at what other terrifying treasures are yet to be uncovered.

There is a film-like pacing throughout which only enhances the memories of those classic Hammer movies of the 1960’s and 1970’s.  Reading FLESH AND BLOOD is similar to holding the storyboards in your hand for a new Hammer filmic fear fest.  Viewing the gorgeous art of Neil Vokes is almost like looking at animation cels.  However, they are not simplistic in appearance and the the work is more detailed.  These are not cartoon animation cels - - more like adult animation cels where the images are more horrifying, bloody, and also erotic. Both Hammer Studio’s bloody tendencies as well as its suggestively sexual open-bodice female characters are represented and recreated here.

Robert Tinnell’s script pays homage to the genre and utilizes characters and situations to the maximum in what Lucas referred to in his introduction as “the epic juncture of Hammer’s great horror franchises in one dramatic, compelling . . . “monster rally.”  You will recognize many of the classic characters as well as names of places.  If you are a fan of Hammer Studios you’ll also recall the names of characters matching those of actors, directors and producers in Hammer history.   SPOILER ALERT - - PROCEED WITH CAUTION!! The story opens as one of the oldest vampires, Carmilla, is caught in the act and killed, but perhaps not before she has influenced her victim - - Laura Ward Baker.  The difficulty of the estate and its manservants to dispatch of Carmilla convinces the lord of the manor, Lawrence Ward Baker, to take further measures to protect his family.  He is persuaded to form an armed company to rid the land of all existing vampires by a sinister and dark appearing friend, only identified as The General.  The General is a Styrian, “a different breed from you English.  There’s something primitive, elemental in our nature - - nearly as black as that of the vampire.  . . . . When we visit revenge on an enemy we are not content with his death.  No . . . we are driven to exterminate his family.  His wife.  His children.  Burn his home.  Wipe out every trace of his existence.” 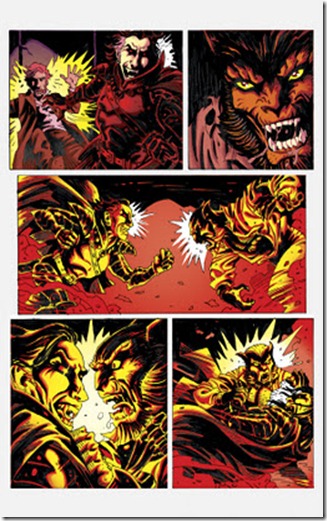 Ward Baker next recruits Doctor Victor Frankenstein, whom he rescues from a mental institution along with the young doctor whose patient Frankenstein was.  This doctor turns out to be Abraham Van Helsing., who immediately becomes entranced by the beauty of Laura Ward Baker.   The company then capture another female vampire for Dr. Frankenstein to experiment on in hopes of developing a serum or potion to destroy all vampires.    Lastly, Ward Baker enlists the assistance of Horst, his brother-in-law who has a reputation for fighting the forces of darkness.  Horst has just recently defeated a werewolf but not before suffering a wound that forces him to have his manservant chain him on nights when the moon is full.

Not to be upstaged, Erzebet, the sister of the dead Carmilla, requests the assistance of the king vampire Vlad/Dracula to stop Ward Baker before they get too far along.  An army of vampires attacks the monastery where their forces are encamped during the conclusion of Volume One.

The artwork is incredible and the colors by Matt Webb are vivid.  There is much use of red and orange / blue and gray to outstanding effect =  warmth and cold, fire and ice, light and dark, passion and frigidity.  Some of the images seem as if viewed through eyes glazed over by blood.  As drawn by Vokes, Dr. Frankenstein resembles actor Peter Cushing.  Dracula looks like actor Christopher Lee.  Carmilla reminds me of actress Ingrid Pitt. And Horst reminds me of the actor who portrayed Kronos in the classic CAPTAIN KRONOS, VAMPIRE HUNTER.

There is a great but short reference article in the back of the book with further information on some of the characters.  This is followed by a second story, to be serialized in future volumes.  “Operation Satan”  is also very short, just three pages to set the stage for a story that is described as homage to another classic film series – The Quatermass Trilogy.  It’s also written by Robert Tinnell with black-and-white art by Bob Hall, tones by Kerry Gammill, and lettering by Rick Lebo. FLESH AND BLOOD VOLUME ONE is an absolute horror gem, and another addition to my long box of “keeper” titles.