By Jeff Metzner - November 14, 2011
I haven't read a D&D comic in ages, but the writer of IDW's new series caught my attention, so I thought I'd try it and also see how their reprints of previous series held up by today's standards.

Dungeons & Dragons: Shadowplague HC: I was attracted to this because of writer John Rogers, who co-created the Jaime Reyes Blue Beetle. He's also the writer/producer of the "Global Frequency" pilot that never aired, and of TNT's current heist drama "Leverage". I was thinking "Blue Beetle" would turn out to be the key resume item here, but actually it's "Leverage". Rogers' characters have great personality and banter like the ones on his TV show, and that's what makes this my favorite D&D comic ever but also a darn fine series in its own right with universal appeal. Honestly, I could ramble on, but the best endorsement I can give is that I just went back to flip through the book to pull a couple of quotes for this piece and I wound up rereading the entire volume. The only flaw is that the book ends on a cliffhanger, but the next volume will be out any day now, so lucky you! Art is by the great Andrea Di Vito, of Crossgen's "Brath" and Marvel's "Annihilation" & "Nova". The hardcover is cleverly produced at the exact dimensions of a D&D game book, which means room for playable versions of the story in the back for current adventurers and nicely oversized art for the rest of us. 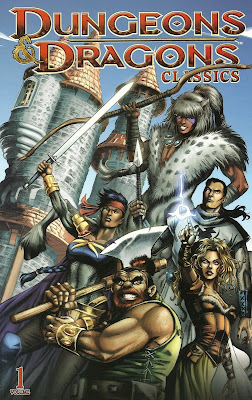 Dungeons & Dragons Classics Vol. 1 TPB: If memory serves, these comics published by DC in the 1980's are the first standalone D&D comic stories outside of "Dragon" magazine. The first story arc, while fun, is disappointingly unimaginative coming from Michael Fleisher, who wrote Jonah Hex through the 70's & 80's and wrote all those bizarre 70's Spectre stories where he cut people in half with giant scissors and such. (The Spectre, that is, not Fleisher, I hasten to say lest I get sued.) I liked the characters and how they're brought together by an incognito goddess, but their quest itself is not that interesting. The second arc, by Blue Devil and Amethyst co-creator Dan Mishkin, is much better. Oddly, two of the main characters -- the centaur and the paladin -- are just gone after the first arc with no explanation whatsoever. These are good stories, albeit aimed at a younger audience than modern comics, but with the names involved I was hoping they'd be great. The art, however, by comics legend Jan Duursema ("Arion", "Arak", "X-Factor" and apparently the basis for a Star Wars character), is outstanding. There's some game material included, but I assume it'd have to be converted somehow since there have been several major D&D revisions since these comics were published.

Dungeons & Dragons Forgotten Realms Classics Vol. 1 TPB: Oh, look, it's the "missing" paladin from the other book, starring in his own series! That would have been worth mentioning in the other story, you would think. (To be fair, there may have been some cross-promotion in the original issues that IDW edited out, the same way they've carefully removed the DC logo from all the covers.) Anyway, these stories are written by veteran D&D game designer Jeff Grubb. As such, they're a little more complex, like a good campaign with lots of different factions having different agendas, and with the imagination of a module designer who isn't used to being concerned about some poor schlub trying to draw his ideas. (There's a valley full of dragons...) Fortunately, the art is early work from Rags Morales, artist of "Identity Crisis" and most recently Action Comics #3, who can pretty much handle anything thrown at him. The "Forgotten Realms" setting also gives D&D fans a chance to see some of their favorite characters, like the powerful wizard Elminster, in the story. I prefer the cast of characters in this book, including the struggling with faith paladin, an iron golem, and a wizard who thinks he's on the same level with Elminster and isn't, even though Grubb is sometimes not too subtle about the game elements. ("Cure Light Wounds!", says the paladin a lot.).

Overall, I recommend the John Rogers IDW series for everyone -- it's that good -- and the Classics reprints for kids, and for adults who are into D&D or fantasy literature. (Though "Game of Thrones" they ain't, obviously.)