DC NEW 52: ANIMAL MAN rules the kingdom (another A+) 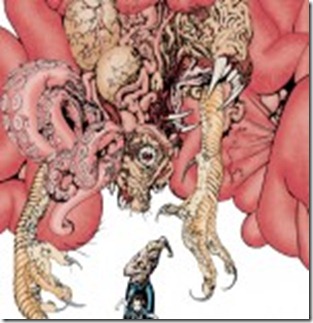 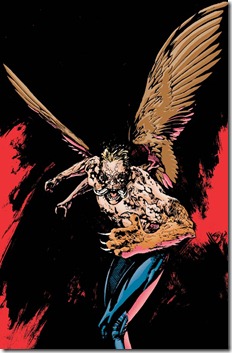 ANIMAL MAN is about as far-removed as you can get with a super-hero title and still consider it part of the super-hero genre.  The script and art are not conventional fare, and take chances.  For these reasons, ANIMAL MAN should be one of the NEW 52 books that you pick up and give it a chance to win you over.

SO, WHAT HAPPENS IN THIS BOOK?  (If you want to avoid spoilers, scroll down to the next subheading.)  - - -

The world of hero Buddy Baker is being turned upside down.  His youngest daughter is exhibiting powers similar to his that manifest in different ways.  The nightmares that bothered Buddy in Issue #1 are becoming reality. He learns that his origins are false, and all along he has been just a small piece of a larger puzzle - - and his four-year-old daughter Maxine will play a more important role in it than he will.  Buddy has to travel beyond the skyline to another realm that is  . . . home.  That home - - “The Red” - - is being threatened by a competing race of otherworldly beings that threaten the entire universe.

1) I love that ANIMAL MAN occurs in Buddy Baker’s family-oriented world.  He is a family-centered hero and depends on those relationships for his confidence, security, and purpose. That family atmosphere also makes it incredibly easy for readers to empathize with the characters and to feel concern for what happens to them.  Now, the entire Baker family is embroiled in the current crisis and at risk.  There are few writers better than conveying a sense of home-spun values, family and belonging than story-teller Jeff Lemire.

2) I appreciate the darker elements of this book.  Lemire is developing an epic saga reminiscent of H. P. Lovecraft and Weird Tales with its hints of elder races in universal order versus chaos conflict. The way that Foreman illustrates these creatures helps to enhance the strange ways.

3) I also like the way Lemire uses the older Baker child, pre-teenager and non-super powered Cliff, to break the ice during moments of high tension with a humorous comment or two. As he and his mother flee from danger, one of the Hunter creatures crashes against their windshield.  Cliff yells out “holy crap!” only to get scolded by Mom (“Watch your mouth, young man!”) As their car gets away leaving the Hunter trying to re-assemble its form on the side of the road - - Cliff says “That was awesome!”  while Mom Ellen laments “I can’t believe I married a super-hero”.

4) I’m entranced by the highly imaginative art of Travel Foreman.  His images of the Red are creative and original.  He seems to have a sense for what Lemire is detailing and gets it down perfect. Whether it’s a panoramic view of this strange otherworld, the facial expressions (some great fear shots) of the characters, or the way details of the art overlap the panels make it delightfully different.

1) I have no complaints about ANIMAL MAN whatsoever.  However, as I mentioned in my review of Issue #1 - -  I don’t like that the DC editorial/marketing department ignores the amount of press that they receive here at BC Refugees.  We don’t want much – just some free reads now and then.

DO I HATE IT, DISLIKE IT, FEEL INDIFFERENT/NEUTRAL, LIKE IT, OR LOVE IT?

I have much love for this book, and I’m moving on past Issue #3. 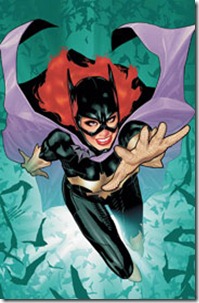 BATGIRL #1 is a good introduction to this book and the character changes that have been made.  The story is good.  The art is good.  I just wish it was great, and that I could more easily  accept the NEW 52 version of BATGIRL.  While I consider the writing skills of Gail Simone to be great, I’m still not happy enough with BATGIRL to want to come back for more.

What’s changed is that the Joker’s bullet that creased her spine only confined her to a wheelchair for three years.  Now that she has recovered, she intends to fight crime from a tooled-up handicapped van that contains her bat-cycle.  She’s moving away from Dad (Commissioner Gordon) and sharing the rent on an apartment with a new character, a bohemian artist (that I’m not warming up to, but I’m guessing there’s more to her than is revealed so far).

I confess that I prefer Barbara Gordon as Oracle, and feel that she can play a much more important role and be a more effective component of the Batman universe in that capacity. (I guess that means that I have some understanding for the adamant fans who know how they like their Superman to be and can’t stand to see him in blue jeans. I promise not to criticize them.)  Adieu, Oracle.  You will be missed.

I also get the feeling that this book would more appropriately be called BATWOMAN because, as depicted by artist Syaf, Gordon sure doesn’t look like a teenager. She also doesn’t act like a teenager as portrayed by Simone. Hey, they are calling this book BATGIRL!

Don’t get me wrong - - BATGIRL #1 is a good read.  There is an interesting new villain, The Mirror, who seems to have walked off the screen of FINAL DESTINATION and taken on the same responsibilities as the Grim Reaper in those films.   I’m just not coming back for more.  It’s easier to drop this book than some of the other NEW 52 titles.