WARLORD OF MARS #2  (Dynamite, December 2010)  “A Tale Of Two Planets, Part 2” written by Arvid Nelson; illustrated by Stephen Sadowski; colored by Adriano Lucas; lettered by Troy Peteri.  Based on the stories by Edgar Rice Burroughs.

The fine work begun in Issue #1 of adapting the classic John Carter Of Mars series continues here, following the pattern in the debut issue of  splitting the book in half and featuring background on the two main characters  (who have yet to meet – and is anticipated to happen in Issue #3). The art and coloring are very nicely done, and reason enough to pick this book up. 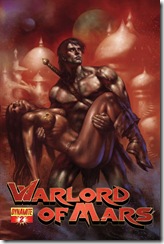 The incidents that befell John Carter in the Arizona hills prior to his arrival on Mars are detailed. He narrowly escapes slaughter by angry Apache Indians and flees to the mysterious cave that acts as his transport to Mars.  In the telling we learn of  his courage and loyalty.  He emerges through the cave exit onto the red planet like a newborn, naked and apprehensive.

In the back of the book we learn how the Martian Tars Tarkas achieved the last part of his name, in a display of skilled and calculated battle versus his rival.  In overcoming his detractors and benefiting from the crude enforcement of justice on Mars, he shows his compassion and his lenience, attributes not favored by most Martian warriors.

I like the way this book is being handled and plan on sticking around. Even though I’m familiar with this story, it still remains fresh and interesting.

The simple yet evocative cover catches your attention immediately, and reminds of the upside-down kisses featured in the SPIDER-MAN movies.  Numerous vines of thick and creeping tree tendrils overwhelm Smallville and give artist Gallo a chance to showcase an  outstanding attention to detail.  The art in this book is perfect - - I’m really enjoying it. 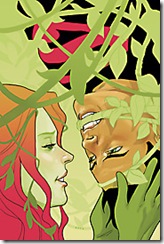 While Issue #1 was mostly character-driven by identifying the players and setting the stage - - Issue #2 deepens the mystery of “old Smallville” with new developments, including the introduction of some manipulators best described as “dark farmers”, perhaps part of some ancient Masonic-like cult of agriculture worship.  We'll have to keep reading to find out.  Lemire’s not giving away anything too revealing just yet - -  just putting the worm on the hook and baiting us.

Superboy reluctantly teams-up briefly with the (as drawn by Gallo) extremely seductive Poison Ivy.  Best friend and high school chum Simon Valentine shows what he’s capable of --  and that’s helping Superboy by utilizing his own investigation and scientific exploration skills.  He’s a lot more than just another Jimmy Olsen foil, despite having red hair (but no freckles).

Nicely done by Lemire and Gallo - - I want to keep going with this book to see what happens. I haven’t been this interested in a Superman title since the John Byrne re-boot back in the 1980’s.

Writer Willingham really has remarkable skill at scripting mythic storylines.  He seamlessly introduces his own ideas into Thor lore and it fits right in.

Issue #2 continues the quest of the Warriors Three to Niflhel, the secluded and dark lands where the savage Fenris Wolf recently was freed from confinement by A.I.M. agents.  It seems the  Warriors Three have a previous connection to the Fenris Wolf, one that was both traumatic and formative in their earlier days as budding warriors and had a mighty influence on their current behavior patterns.  There’s another reason besides honor and justice that the Warriors Three set out on their own after the Fenris Wolf, and that’s a thread that will be woven throughout the remaining chapters of this limited series.

I like the way that Willingham ties it all together. To tell more would only spoil it.  This is worth your time.  Before the current trail ends the Warriors enlist the aid of Reed Richards and find a thread leading to one of the A.I.M. agents involved in the Wolf’s release.