Continuing a series featuring select comics-themed podcasts, I return to another one of rather local origin:  COMIC BOOK DINER.

Subtitled “The Art And Business Of Comics”  this podcast is different from the others I’ve been listening to.  Rather than focus on reviews or analysis of current books, writers and/or artists COMIC BOOK DINER concerns itself with matters related to independent creators, and is geared towards providing assistance, guidance and tips. 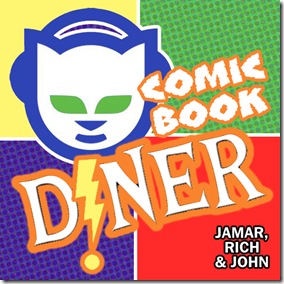 You don’t need to be actively involved as a writer, artist or creator to appreciate the content, as COMIC BOOK DINER is mostly informal and remains interesting to anyone who wants a little glimpse “behind the scenes.”  All the presenters are likeable and “down to earth” rather than aloof or preachy.  They have all collaborated on various works or participated in workshops and convention appearances together, so there is a familiarity and friendship that comes across in their discussions.

The COMIC BOOK DINER podcast started up in 2010 and is now 19 episodes old.  The most recent, from December 15, featured a discussion and opinions on comic book digital piracy / file-sharing / illegal downloads as well as kids comics on the web and different methods of bringing works to the targeted audience, including finding an agent and/or self-publishing.   Other episodes have spotlighted creator interviews, convention reports and information episodes related to “Having A Plan”, “Hollywood & Comics”, “Prepping For Print”, “Web Comics” and “Getting Paid”  etc.   Most episodes run a little over one hour, with the most recent two approaching two hours in length.  My only concern is that sometimes they can get carried away with the inside jokes and banter and stray too far off-topic - - which runs the risk of extending the episode longer than necessary as well as losing some audience.   This seems to be true of every podcast I’ve encountered so far as well.  It’s a pretty normal occurrence, and if you’re going to invest some time in following podcasts be prepared to waste a little time on non-essential moments.  (I’m just as guilty, as this blog outlet doesn’t restrict my word count - -  I’m sure there are some readers who think I ramble too much.)

There are three creators who frequent the COMIC BOOK DINER and they seem to alternate as unofficial moderators from episode to episode.  They are: 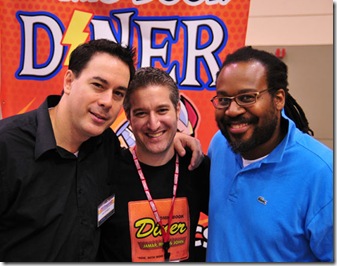 John, Rich and Jamar at the 2010 Baltimore Comic Convention. (Photo by Steve Parke)

JOHN GALLAGHER, who runs Sky Dog Comics And Design  in the Washington DC metro area and is a writer/cartoonist, self-publisher who also runs a graphic design and interactive media company. He is the creator of BUZZBOY COMICS and co-creator of ROBOY RED with Rich Faber.

RICH FABER resides near Philadelphia and has 15 years experience as an artist and inker.  He formerly was a featured artist on STEEL for DC Comics and currently devotes his time to independent work. He is co-creator of ROBOY RED with John Gallagher and has also worked with him on some BUZZBOY titles.

JAMAR NICHOLAS is the creator of web comic DETECTIVE BOOGALOO among others, and recently completed illustrating a new graphic novel edition of Geoffrey Canada’s FIST STICK  KNIFE GUN : A Personal History Of Violence.  The story, based on growing up in the Bronx in a climate of children fighting and carrying weapons, has won critical acclaim and is a featured title on Amazon.com.