The horror anthology comic seems to be making a comeback.  First the revived CREEPY debuts at Dark Horse Comics.  Then Monsterverse  releases BELA LUGOSI’S TALES FROM THE GRAVE.  The latest, BEDTIME STORIES FOR IMPRESSIONABLE CHILDREN, is the new  entry from Moonstone Books.  Add to this the five-issue EDGE OF DOOM min-series of stand-alone horror tales from IDW and you have a quirky quartet of tales to chill and thrill.  Hopefully, these books will make enough of a sales impact to merit their continued publication.  I’d like to see that, as they are all worthwhile. 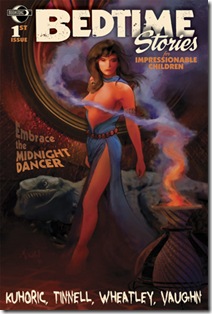 BEDTIME STORIES FOR IMPRESSIONABLE CHILDREN is the brainchild of J. C. Vaughn, who also created the narrator/host and writes the transitional segments between the stories.   This book has a humorous bent to it, albeit dark humor.  The host is certainly unconventional, and different from the usual trail guide.

Alonzo Del Vecchio is a newly unemployed construction worker in the Pittsburgh, PA area who decides to open a day care center.  He tells the tales to keep his young charges in control and occupy their time.  He’s a quirky, Joe Pesci type of character who intersperses his conversation with Pittsburgh slang  (“yinz”,  nebby”, etc), which makes it even more entertaining for me since that town is where I spent my youth.   I also recognize many of the area locales that are referenced in the stories.

Issue #1 opens with “One Of Those Mother-Daughter Things” where the daughter continually complains about her “monster” of a mother to her boyfriend, until one day she decides to put an end to their constant disputes - - and the boyfriend finds out just how literal that description was.  Despite most readers guessing at the eventual outcome, it’s the art and story-telling style that entertain and hold your interest.   A  good opening act. It's written by J. C. Vaughn and illustrated by Gene Gonzales & Mark Wheatley.

“Life Stinks” is told in a newspaper comic-strip style that helps lend it a light-hearted tone.  Just before a flaming meteor strikes and acts as catalyst for a zombie/undead revival, a sewage treatment plant worker has an accident and discovers a way to achieve immunity from zombies.  It will remind of the equally disgusting method used in THE WALKING DEAD to camouflage the living amongst the dead.  As told by writer James A. Kuhoric and illustrated by Joe Keatinge this is very funny. 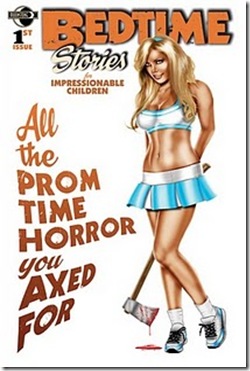 “Mad Man / Dead Man” by writer Robert Tinnell and artist/letterer Rich Woodall is the creepiest and best of the three tales in this issue.  It’s a Victorian era story about a medium committed to a mental hospital for insanity after being charged with practicing witchcraft.  The warden’s wife sees it as an opportunity to contact her deceased brother, killed in wartime.  From there, the story takes two unusual twists before coming to a bad end for most of the characters/plotters.

After the first tale, many children at Del Vecchio’s Day Care react with shock or shut their eyes and clamp their hands over their ears to avoid being frightened by the story.  A wise-beyond-his-years youngster lectures “Uncle Alonzo” on the inappropriateness of the story “to tell a bunch of little kids”.  While Alonzo feels the story has a “great moral”, he tries to adjust and temper the following tales, only to succeed in sending more children into shock and creating more trauma by issue’s end.  It sounds cruel, but it’s told in such an endearing and amusing way that it brings chuckles and smiles.   With BEDTIME STORIES FOR IMPRESSIONABLE CHILDREN you can get your horror and also be happy about it.  Recommended.