Just random ramblings, that’s all . . . . . but a little author-focused this time

One of the joys of this  comic book hobby is the “fresh find” - - - picking up a new title or first reading/viewing of a writer or artist that impresses or delights you.   In a time of penny-pinching and monthly comics budgets, it’s especially comforting when the discovery rewards your investment of time and money.

Many of us, after discovering a writer or artist that we enjoy want to explore more of their work. There’s always a risk and a reluctance to do so - - “if I pick up this other title will I be able to easily comprehend the continuity and back-story?  . . . . Or will I understand it, but then get involved in a complex (but interesting) storyline that requires me to keep buying more issues?”

One of those “fresh” discoveries for me was a new title, SOLDIER ZERO from Boom!, and writer Paul Cornell.  When I learned that he was scripting ACTION COMICS at DC my interest grew.  After hearing that the direction of that book has changed (it’s now about Lex Luthor) I really wanted to explore further.  Again, the two cautionary concerns mentioned above entered into my decision-making.

Then, opportunity appeared in the guise of ACTION COMICS ANNUAL #13, an over-sized one-shot with two complete stories by Paul Cornell.  I was tipped off to this remarkable good fortune after hearing about the book while listening to a comics podcast (which I’ll thank by featuring it in a future article). 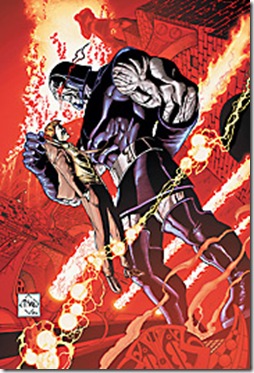 I am very impressed with these stories.  Prior to this, I can only recall the occasional glimpse into the psyche of Lex Luthor depending on who was writing the story.  Some writers would give you a little glimpse inside Lex. But in the majority of occasional stories I’ve read  = Luthor seemed to serve mainly as the perfect foil to Superman - - the mentally superior antagonist versus the physically superior hero.  (I have to confess here that I’ve never been a regular Superman reader - - ever.)

Cornell has given me the best understanding of the mental make-up and resolve of Lex Luthor that I’ve ever encountered - - he goes deep, deep,  deep into his motivations and shows how Lex developed his personal value system at an early age.  Two prominent DC characters had a major influence on that  - - you can’t think of them as “mentors” because (as Cornell reveals) Luthor considers himself to be above everyone else and would only “allow” someone to think he might be of assistance or guidance.

Under the capable hands of Cornell, young Lex Luthor carries himself with a personal charisma or magnetism that attracts an audience and makes others pay attention to him.  He charms and ingratiates his way into the favors of the most casual acquaintances and exploits them for his own gain/development - - - a younger Perry White (an investigative reporter in this story), a prominent club owner and powerful Intergang figure, and the huge imposing Darkseid as well.

Luthor finds his way into the other side courtesy of a boom tube disguised as a doorway and in the words of Darkseid –“I allow such as you to see the door, to unlock it - - only so you may fulfill your ‘potential’ !  To serve Darkseid !!  You will start in the laboratory - - my new scientwister!”

Of course, Luthor explores beyond his boundaries, makes a number of discoveries of his own, manages to piss off Darkseid yet escape with something of powerful value he’ll use much later, all the while leaving his personal arrogant message at his departure.  Darkseid, as you might expect, allowed much of this to happen  - - all for his own future purposes.  Who’s playing who?  One lesson for all, as reminded frequently by young Lex  is  - - “never turn your back on me.”  I am blown away by this story.  If you are a Superman follower, you must read this!

This tale is told in a storybook fable style, with just pictures and captions - - that help give it a sense of legend and history.  “A Father’s Box” gives further insight into another classic DC character, Ras Al Ghul.  It reveals how he tutored young Lex Luther for a period of time, and trusted him as an apprentice - - sharing his wisdom and actually considering him  a potential heir of his fortune and empire.  Boy, that Lex can make anybody love him!

Naturally, Lex goes where he shouldn’t go.  A “box” or “the Box” is important in both of these stories.  Luthor manages to piss off Ras, who kills him in a rage.  Luthor gets revived courtesy of the Lazarus Pit.  The captions tell the rest of the tale best - - what Luthor hoped would happen, and what he lost as a consequence of his actions - - - “for the old man knew for Luthor life would punish worse than death.  And all those flaws that might have saved him, had he know them, shown them, seen  - - were locked up in that moment’s secrets.  Blamed on others  - - save for dreams.”   Now I need to read some back-issues of ACTION COMICS.  Hope I can find a friend to loan them to me.  I simply can’t afford all this goodness.

The third issue of the comic that started all this Cornell curiosity for me - - SOLIDER ZERO - - comes out today and I remain delighted and very happy with this new book.

Some time ago I was asked to mention some of my favorite comics and I stumped myself.  I just couldn’t pin it down - - so I decided to talk about all the different genres of comics that I enjoy to  read and what common element attracts me to them - - good characterization.  I guess I’m just too jaded after decades of reading comics (especially super-hero titles)  and a good plot or mystery sometimes just isn’t enough for me anymore.  The only exception for me are the short stores in horror titles where the plots rule. But, if it’s a continuing series I need more than that.  Good character-driven stories will do it for me and keep me engaged.  Action and plot alone aren’t sufficient enough to hold my interest.  What attracts me to SOLIDER ZERO the most is the way these characters are being developed and more insights revealed as the story progresses.  (Whew! - - and I still need to write about Cornell’s quirky KNIGHT & SQUIRE series at some future date.  - - No rest for the relentless reader/writer.) 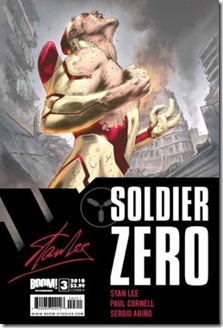 So I’m going to spend more space here talking about where the characterization of SOLIDER ZERO is going rather than summarize the plot/storyline or reveal too much of it.  That will leave you some surprises to discover for yourself if you choose to check out this title.  (And I recommend it!)

Paraplegic war veteran Stewart Trautman finds himself able to communicate telepathically  with the alien parasite he shares the power suit with.  Later, even his brother James is allowed to enter into the exchange of talk

The story finds him back in human form in the middle of the street outside the mini-mart where the robbery is foiled. Police officers can’t understand why he seemingly misplaced his wheelchair and take him to the precinct station for questioning.  We learn that the suit does not have infinite power duration and over-utilization will drain it, reverting Stewart back to wheelchair-dependent status.

The alien “hybrid” is learning to adapt to these changes even quicker than Stewart. The alien quickly picks up on English, local slang and expressions and relates better to Stewart as a result. At the same time these changes, particularly the alien presence inside, seem to be driving a wedge between Stewart and his brother James.   Stewart’s initial made-up story to police investigators makes them suspicious of James’ treatment of Stewart, and that infuriates James.  (Or perhaps they suspect that James is the mysterious super-hero shown foiling the robbery in the security camera video and that Stewart is covering up for his brother with a phony story.)

Stewart is now gaining enough control of the suit that he can sometimes over-rule the alien parasite’s intentions and power-up on his own. This parasite “friend” is also not your typical alien soldier - - he’s kinder and “nicer'”.  Most hybrids kill their host body and maintain full possession.  One limitation of that is that as the body starts to fall apart, the alien must continually seek new hosts - - which means more killings, etc.

Sergio Arino handles the art chores in issue #3, and does a fantastic job with everything, especially the facial expressions and body language (so essential to this story).   And that brings us to yet another strong recommendation from me for for this Stan Lee-influenced title.