I don’t read BATMAN titles on a regular basis.  I did come back for awhile right after BATMAN: R.I.P. (which I haven’t read yet) and sampled the new DETECTIVE COMICS, BATMAN AND ROBIN (Issue #1), BATGIRL, STREETS OF GOTHAM, RED ROBIN and BATMAN (Dick Grayson)  - - and even wrote about some of them here.  I liked all of them  - - just made a budget decision not to try and follow them all.  Eventually I weaned every one of those titles from my monthly buys.

However, reading them prompted me to check out the back history and a noted Bat-scholar (name of Bill) told me I needed to start with the BATMAN AND SON trade paperback.  So, I’ve been buying some of those trades and stock-piling them for that rainy day.

Recently, I picked up BATMAN, INCORPORATED  #1 out of the blue (should that be out of the black?) and BATMAN: THE RETURN one-shot and read them without benefit of having gone through all that back-story first  (including THE RETURN OF BRUCE WAYNE, which I was also stock-piling).  I thoroughly enjoyed them and feel the new direction is very fresh. 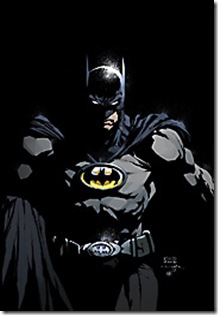 So, that then prompted me to read those six THE RETURN OF BRUCE WAYNE issues.  Yes, I’m confused  (as you might expect) but I sense that Grant Morrison didn’t just “throw something together”  (as some critics of him suspect) but actually had a game plan in mind and sought to tell a lengthy tale that would introduce some new elements into Batman mythology.   I also see that he didn’t intend to make it easy for the reader (including Batman loyalists) but wrote a challenging script that reminds me of author James Joyce’s classic ULYSSES.  (Very hard to follow but ground-breaking for modern literature  - - and very rewarding if you have the patience to work through it.)

So, the question is = did Morrison indeed compose an epic worthy of discussion and review for decades to come? - - or is it a monumental flop, a noble experiment that fell apart?  - - or just genial Grant having a joke on us?   I intend to answer that question  (at least for myself)  and will update you (if you care)  on this website.  Look for several more articles.