Getting an ear full: comic book podcasts (part one)

I love reading comics for pure enjoyment, as do many of us.  I also like to read critiques of books and occasionally to participate in group discussion (the semi-regular BC Refugees gatherings)  - - or at least hear what others are thinking about one of my favorite hobbies.   The wonder of the internet makes doing all this so accessible, with a variety of sources to choose from.  Beginning with this article, I plan to share my internet discoveries here on an irregular basis.  After listening to several comics-related podcasts for the past several months, the newest and latest has prompted me to finally write about them - - especially due to the local nature and origin of this one  --  my favorite comic store haunt in Delaware. 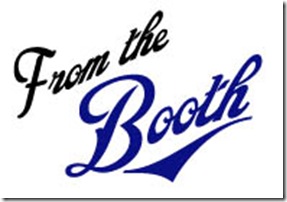 FROM THE BOOTH is very new, just three podcasts old.  It was started by three regular customers of Captain Blue Hen Comics in Newark, Delaware  - - and actually originates from the former Woolworth’s in-store restaurant booth  now located and utilized at Captain Blue Hen for in-store signing events and general hanging out.

The commentators don’t know very much about each other, which makes it interesting as the listener learns about their various likes and dislikes for the first time along with them.  The trio include “Super Dan” (an avowed Superman disciple), “Doktor Andy”, and “(only) Randall”, who serves as unofficial moderator.  They range in age from 26-30, which makes me feel ancient since my firstborn son is older than that.   They do appear to have a good knowledge of the comics field and history, particularly as it pertains to mainstream Marvel and DC  characters.

So far, their conversations and commentaries have been both interesting and topical. If there is any criticism/minor gripe about “From The Booth” it’s that at times it goes on for several minutes longer than my interest level - - and that’s a comment that you’re going to hear me make about almost every podcast I review.  There’s something about getting comics fans together and giving them an open mike that makes them forget the time elapsed.  (I’m also guilty of that).

Hopefully, I have posted this link properly and you can access their podcasts by clicking on this:

http://www.captainbluehen.com/from-the-booth/   (In any case, that’s the web address you need).   What follows is a short summary of each episode so far:

EPISODE ONE - - NOVEMBER 24, 2010 =  Commentary on the recent announcement from DC and MARVEL regarding dropping prices of single issues to $2.99 in 2011.  Doktor Andy is especially annoyed at Marvel’s ostentation in claiming that the success of digital comics sales made the price drop possible, while DC is more confessional in admitting that sales had dipped and not enough newer titles were getting a fair trial (as just one result of higher prices).   Discussion also covers buyers’ comic book monthly budgets (something all serious fans have to deal with) and the relationship between good/bad art and whether it will drive/curb sales of otherwise good story-telling.

EPISODDE TWO  - - DECEMBER 01, 2010 = Commentary on the official GREEN LANTERN movie trailer.  (Dislike of Ryan Reynolds, dislike of his computer-generated costume, dislike of Warner Brothers, etc).  Thirty-one minutes of GREEN LANTERN movie anguish.  The “Captain” himself (Joe Murray, co-owner of Captain Blue Hen comics) enters the conversation and puts a humorous spin on the Green Lantern milieu.  Everyone’s fingers are crossed that things will get fixed in final editing/re-write before the movie premiere in 2011.

EPISODE THREE - -  DECEMBER 09, 2011 = A mixed bag of comments and a little rambling that begins with opinions on the Superman/Twilight connection made public by Katie Couric on network television ( I totally missed that), as well as the SUPERMAN: EARTH ONE hardcover by JMS.  Likes and dislikes on the SMALLVILLE  t.v. show. (My two cents = the dialogue is very awful this season – reason enough to avoid).  Books they are reading, including HAWKEYE AND MOCKINGBIRD and CAPTAIN AMERICA, etc.

FROM THE BOOTH is worth your investigation.  I believe they are still feeling their way into this podcast and just beginning to get comfortable. It will be interesting to see what occurs in future episodes.