So far, the debut issues of Stan Lee and POW! Entertainment’s new super-hero titles at BOOM! Studios are batting three for three.  I like them all and want to keep following the first story arc in every one.  The latest, STARBORN, debuts this Wednesday . . . . . . . . .

The characterization is what I liked best about SOLDIER ZERO in its’ first two issues.  The story line and premise intrigued me more with THE TRAVELER.  And, with STARBORN , it appears to be a combination of the two.  STARBORN is a title that in it’s first issue travels along the fine line between fiction and reality, weaving in and out enough that they seem to cross over into each other. 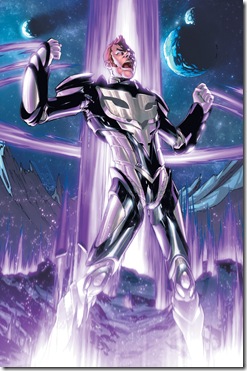 It’s not hard to identify and understand the main character, Benjamin Warner.  He’s a young,  likeable office worker who dreams of bigger aspirations as a science-fiction / fantasy writer.  He anxiously awaits word from a publisher on his first novel submittal.  He’s been creating his future world, set in “the human civilization” of another star system, since his early school years when his adoptive parents worried that he was obsessed with creative writing.

During the process of final editing, he hires an experienced consultant to review his book and learns that his novel seems to be heavily influenced by the works of a vintage science fiction writer before his time.  After exploring those works, Warner finds many similarities as both writers set their futuristic tales in “the human civilization.”

As incidents and situations from his work-in-progress seem to intrude into his real-world life and begin to blur the lines between them, Lee and Roberson’s STARBORN reminds me of the great work being done by author Mike Carey on a Vertigo title, THE UNWRITTEN.

However, that’s where the similarities between STARBORN and THE UNWRITTEN end.  While they both deal with reality/fantasy, each title handles that in a different way.  STARBORN feels light-hearted compared to the deeper THE UNWRITTEN.  In fact, main character Ben Warner explains it better as he tackles the difference between his work and that of the writer he seems to be influenced by:  “ . . . And they are less about the action and more about the politics of the world. More introspective. Somber.”

And STARBORN is really about the action.  Before Ben can deal with the unsettling reality that his manuscript has been rejected - - - aliens from his own work confront him and ask if he is “Bin Yaamin.”  (Say it real fast and it sounds like Ben Warner.)   In steps a shape-shifting member of the Crimson Hand, who in reality (whose reality?) is his childhood friend and object of desire Tara Takamoto, and we’re underway. 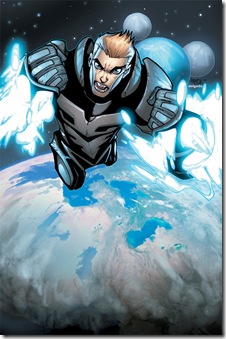 Based on the title of this comic, it’s not hard to imagine that Ben Warner is a displaced alien, sent to another planet early in his life to keep him safe until his revival.  Apparently, the wrong side got to him first and it may be that Warner’s creative world is nothing more than suppressed memories.   Writer Chris Roberson does a nice job of planting these seeds/clues without slamming the reader over the head with them.  He’s an upcoming talented writer, who bears watching based on this title plus his work on IZOMBIE and the DO ANDROIDS DREAM OF ELECTRIC SHEEP?: DUST TO DUST mini-series.

The only put-off for me with STARBORN is the art by Khary Randolph.  I don’t mean that it isn’t good  - - it’s just not a style that I am fond of.  Randolph illustrates the story in a manga-influenced style that seems to be popular with many youth-oriented titles and reminds me of Humberto Ramos.  To his credit Randolph is not a mere copy-cat, and also seems to pay a little more attention to shading and shadows than others who draw this way.  It’s just a little too “cartoon / cel animation” looking for me.

I’ll be back next month for SOLDIER ZERO, THE TRAVELER, and STARBORN and will probably have more to say here if they maintain the high quality of these debut issues.