Science Fiction In Comics, Part One

The saga of Logan continues to run and keeps impressing me with its fresh take on a familiar story.  I’m ready to forgive Bluewater Comics for the long wait between issues,  and hope that other readers are remaining patient.    There have only been three issues released in 2010 (the last, dated March 2010, didn’t hit comic stores until July) but it remains one of the better science fiction titles currently available in what might just be the tip of the renaissance iceberg for more pure science fiction appearing in comics.  If you are not willing to wait so long between issues, I did see on Bluewater’s web site that they announced plans to publish the first story arc (which ends after six issues) in a trade edition.  I’m not sure exactly when that might become available, since Issue #6 was originally slated for July 2010 release.

Daniel Gete puts some of the best facial expressions into his art.  They really help to convey what the characters are thinking as they react to various situations and events.  He also has a marvelous method of conveying the vast scale and depth of Logan’s futuristic world without resorting to full or half-page panels. Rather, his panels are small but appear wide-screen and panoramic at the same time.  It’s similar to turning I-Phone sideways to watch a wide-screen movie  - - the images are much smaller but you can understand and still visualize the scale. 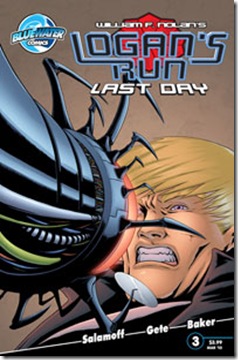 Gete’s work continues to mature and improve, and it’s a delight to watch it develop in this title.  I see less Perez influence and more of Gulacy’s and Steranko’s stylings in this issue.   I’m reminded of those two classic illustrators in the way Gete uses the size of the panels for scale.  As far as the facial features are concerned, it’s here where Gete moves beyond their styles and starts to blaze his own trail.

The return of colorist Joseph Baker this issues reminds me of why I missed his work in Issue #2.  He makes such a difference to the art. This book is so cool just to look at.  Baker’s use of  vivid, clean colors highlights and draws more attention to the art; and his use of shadows and shading on faces and anatomy is extremely effective.

That brings us to the story.  Paul Salamoff continues to hold back from revealing Logan’s exact emotions and intentions, but lets a little more escape from his cold and calculating (sometimes aloof) demeanor this time.  It’s a turning point for Logan as he seems to  question his direction and mission and lets that internal conflict manifest in some extreme fashion this issue.

But it’s Jessica who appears to have the largest change of heart this issue.  A casual reader new to this book and reading Issue #3 only might come to the conclusion that she is the central character  (in spite of the title).  Issue #3 begins with her expressing mistrust and apprehension regarding Logan, continues with her questioning his direction and motives, and ends with her acceptance of Logan as a partner and confidant on their escape path.   If there is a central theme to Issue #3, it seems to be about trust.  In very telling fashion, the issue begins with Jessica rejecting an extended helping hand from Logan on page 1, and ends the last page with Jessica extending a helping hand to Logan.   Logan:  “You could have let me die.”   Jessica: “I’ve seen enough death for today. . . . . . It looks like you’re in it for the long run now.”

I don’t want to spoil the storyline, so here’s a quick preview of what to look forward to in Issue #3:   Logan betrays his intentions and blows his cover in a careless response to Jessica, as she corrects him.  The seemingly emotionless Logan explodes with violent consequences for a pack of outlaw “cubs” and later with his own Deep Sleep enforcers.   There are some great dialogue exchanges between Logan and Jessica where he causes her to question her own logic and principles and she does the same to him.   There’s a very telling exchange of glances between a DS agent and the little waif who helps Logan and Jessica board the speed train to the next station of Sanctuary.  Logan saves Jessica.  Jessica saves Logan.  A new character is briefly introduced who seems to be a nice combination of WWF King Kong Bundy and Rondo Hatton.

Very good stuff here.  Get it or regret it.

There is a such a consistency and quality to the entire Radical line that you can pick up almost any of their special preview #0 books and not be disappointed for your $1.00 cover price.    They feature good writing and art with amazing inks and colors that give every one of their books a just-painted look.   The storylines all take place outside the superhero realm  and focus on other pop culture genres - -  western, science fiction, fantasy, crime, horror, etc.   It’s as if they already realized that it’s tough to beat Marvel and DC at their own game - - so why not offer something different and stay with it? 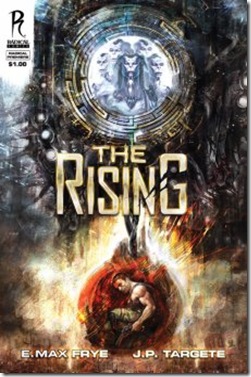 I couldn’t figure out the entire storyline from the 16-page preview of THE RISING  but I can discern enough to whet my appetite for the first issue when it debuts (not scheduled to occur until Winter 2011).  The beginning of the issue features some soldiers with high-tech gear bogged down in a swamp as they await the amphibian-like alien enemy to come out of concealment and commence the battle.   There’s just a smattering of dialogue and plenty of gorgeous art as the squad captain rescues an injured comrade only to get fried and left for dead by an lightening-like ray from hovering enemy aircraft.   After page 6, there follows 8.5 pages of caption and dialogue free art, leaving the illustration to continue the story of how this  soldier is revived and later joins a tribe of Amazonian people.   He later is captured by the aliens.

You would think you were viewing storyboards for a movie; and no wonder when you consider who the creators are   - - - E. Max Frye, a screenwriter who most recently worked on HBO’s Band Of Brothers series; and J. P. Targete , a Pixar illustrator who’s presently working on their adaptation of John Carter Of Mars).

The aliens are apparently ruling the Earth now, with the cooperation of the female President Of The United States and other former world governments.  It seems the brother (Cyrus Jakes) of the captured captain (we don’t learn his name in this preview) has also become a willing ally of the aliens.  He does nothing to interfere with their plans for his brother, which include a trial in front of the Truth And Reconciliation Commission and subsequent assignment to a FEMA labor camp.

The aliens provide a man of faith to visit the camp, but it’s not for spiritual support or guidance.  The reverend breaks out into profanity as he reveals his true purpose - - to break their spirit and crush their hope.   In an intentionally ironic outcome, a prisoner is permitted to prove his faith and gain freedom by beating “Darwin at his own game.”   Darwin turns out to be a behemoth mutated gladiator and the game is a bloody fight to the death.

Yeah, you might say a lot goes down in 16 pages. The full 56-page first issue and the entire 3 issue series should contain a lot more to keep my interest.