Harvey nominations (Part One): A reviewer is humbled

Portions of this article were taken from an official Baltimore Comic-Con press release.

The 2009 Harvey winners will be announced at a special awards presentation to take place at the Baltimore Comic Con on August 28th.   This is the fifth year that Baltimore Comic Con has hosted the awards banquet and ceremony.  Named in honor of the late Harvey Kurtzman, one of the industry’s most innovative talents, the Harvey Awards recognize outstanding work in comics and sequential art. 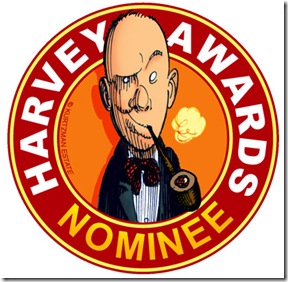 What makes them special and significant is that nominations for Harvey Awards are selected exclusively by creators - - those who write, draw, ink, letter, color, design, edit or are otherwise involved in a creative capacity in the comics field.  Also, only those professionally involved in a creative capacity within the comics field can vote.  This makes them the only industry award that is both nominated and selected by 100% comics professionals.  Creators vote for their peers.

Now it’s going to seem like I’m changing the subject, but the reason will become clear shortly:

I’m proud to write for the BC Refugees Blog and was honored by the invitation to participate - - and I’m not trying to pat myself on the back here.  I feel that the quality of review and writing on this site is a step above the average comics blog.  Some of those just seem to be outlets for negative criticism and rants.   The writers here seem to put a lot of thought into their statements and make a conscious effort to alert fellow readers to those books, writers, and artists deserving of more attention.   By association,  I feel my writing has been improved and upgraded by taking a cue from others and doing my best to uphold what I feel is the  unstated and subconscious “mission”  of this comics blog site - - - to draw a little attention to quality work that could potentially be overlooked on the huge menu of monthly books and trade editions.

Since I’ve become associated with this site, I’ve been reading less but enjoying it more.  Also, I’m reading a wider variety of work scattered across the broad genres of modern day comic books.  My responsibility as a reviewer has also caused me to scrutinize works just a little bit closer and a little bit longer (including second and third readings) . That has resulted in increasing my levels of appreciation for current comics creators.  Comics are better than ever - - and we are enjoying a renaissance of high-quality writing.  I also feel that my knowledge of the field has been enhanced well beyond that of the casual comics reader.

However, after reviewing the list of nominees for Harvey Awards  I begin to realize how much great work is truly out there - - so much more than I have had an opportunity to explore.  I also realize that I am not as well-informed as previously thought - -  because I don’t recognize the majority of works and creators nominated here.  It’s a humbling experience as I realize that I have so much study ahead of me to even deserve to consider myself well-rounded or knowledgeable of these fine artistic endeavors.

I humbly present to you the Harvey nominees (with assorted comments by me in italics):

The only work I am not familiar with here is Kinney’s DIARY OF A WIMPY KID  (also made into a movie).  I hope to remedy that situation by making a list and checking out the local library offerings before hitting the bookstore. (I’m budget-minded by necessity).  Of the other four they are all deserving.  This is a tough choice.  The only work here I’ve read at length is BLACKEST NIGHT.  While I enjoyed it and acknowledge that  it was a monumental task to pull off – it felt like a group effort rather than the sole work of Geoff Johns.  Robert Kirkman is going to get plenty of recognition later this year when THE WALKING DEAD television series debuts on AMC.   I believe Mark Waid has previously been honored. So,   I’m rooting for Jason Aaron here.  His work on SCALPED has been consistently high-caliber.

Brian Fies, “WHATEVER HAPPENED TO THE WORLD OF TOMORROW?”, Abrams ComicArts

This appears to be another deserving list.  The choice won’t be easy  for the voters.  However, it’s easy for me simply because I’ve only seen more of the work of the last two nominees, although I’m familiar with the others.   Frank Quitely is consistently good and everything he does is worth checking. But it’s a hands down vote where I’m concerned - - - give it to J H Williams III - - a very innovative and creative artist whose best work is right here, in the transitional issues of DETECTIVE COMICS featuring Batwoman.  That deserves an Absolute Edition.

Now comes the time when I feel humbled because of my unfamiliarity with so many of the nominees.  I only know of the Langridge and Mazzucchelli works.  ASTERIOS POLYP goes well beyond “cartoonist” and should get the nod for best graphic novel.  I’m holding my vote back.  Please give it to Roger Langridge for his remarkable THE MUPPET SHOW COMIC BOOK.  Not only does he create interest in comic story-telling among younger readers (while still entertaining the adults)  - - his amazing art is going to help get younger people interested in comics art as well.

Brian Fies, “WHATEVER HAPPENED TO THE WORLD OF TOMORROW?”, Abrams ComicArts

It’s time to confess that I rarely pay attention to the lettering on books, and have a hard time recalling their names.  (Something else I need to work on if I aspire to a higher knowledge level).   However,  David Mazzucchelli’s imaginative ASTERIOS POLYP made me pay attention to what he was doing with the lettering - - - so that’s who I would vote for.

I regret that I haven’t paid attention to the on-line comic debut site Zuda, even though I’m registered and can vote for my favorites. I’ve heard a lot of good things about HIGH MOON, but have yet to check that out.   BLACKEST NIGHT is a real beauty to look at, in many aspects.  But the work on THOR has been so outstanding I’m giving my vote to Mark Morales.

Brian Fies, “WHATEVER HAPPENED TO THE WORLD OF TOMORROW?”,  Abrams ComicArts

Again, I am ignorant of much that is here.  Seems like WHATEVER HAPPENED TO THE WORLD OF TOMORROW? will be grabbing some awards, based on the number of categories it has been nominated in.  I give a nod to ASTERIOS POLYP again.  Just as he did with his lettering, Mazzucchelli forced me to pay attention to how he was using color as well.

Now here’s a category most of us can relate to, even though we may not have read the actual contents of the books.  As long as you’re visiting your neighborhood comics store on a regular basis you will have seen most of these.   I just love those BATMAN AND ROBIN covers - -  makes you want to pick the issue right up (even though I opted to collect these in trade editions).

NEXT IN PART TWO:  The rest of the nominees.  I also wonder how a comics industry creator who will be voting  for the Harveys could possibly be familiar with all the nominated works.