By Jeff Metzner - August 24, 2010
Now that Jeph Loeb's Red Hulk epic is concluded as of Hulk #24, it's time to go back and look at the stories that have come out since "Fall of the Hulks" Alpha and Gamma. I'm not going to name the Red Hulk's real identity here because the collection with that story hasn't come out yet, but beware: Marvel's not being coy about that identity anymore so if you read any solicitations or interviews with Hulk creators you're liable to get spoiled before you read the actual story. 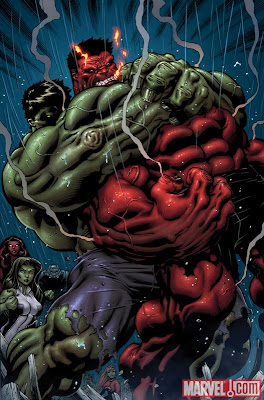 Hulk 19-24: Jeph Loeb's more sophisticated storytelling that I liked in #18 continues here, as the Intelligencia tries to capture the eight smartest people in the world and hook them up to a machine that long-time FF fans will recognize. This gives Ed McGuinness a chance to draw the FF, Black Panther, the X-Men and the Avengers, including their "Hulked out" versions at the end of #21. Since "Fall of the Hulks Gamma" Banner and the Red Hulk are working together, and if I had changed my Red Hulk guess like my instinct told me to when that happened I would have been right. Unfortunately I was stubborn so I can't say "I told you so". #23 is the big Red Hulk reveal (actually it's the last page of #22), and since the story spans the Hulk's history (that's a clue) Loeb recruited 10 former Hulk artists for a double-sized issue including Sal Buscema's first pencils in years. That issue alone is worth your time even if you're not interested in the rest of the saga. I don't want to give much away about the big Green Hulk/Red Hulk confrontation in #24 but I thought it was resolved really well. Rereading these issues knowing the Red Hulk's identity is a different experience, so kudos to Loeb for crafting a story that holds up to scrutiny.


Incredible Hulk 606-611: Whew, these issues are so dense that they resist any kind of summarizing. Suffice it to say that the Intelligencia and Banner's intricate plans are both in their endgame, and Greg Pak does a terrific job portraying Banner as a master manipulator. ("...if any of you knew all the different angles I'm playing, you'd never trust me again.") I especially loved how Banner manipulates the Avengers into helping him "rescue" Betty by playing on their guilt about their lost loves. Paul Pelletier also outdoes himself, making the story with dozens of characters and emotions dynamic yet easy to follow. The Red She-Hulk backups in #606-609 tell some of her story before her first appearance during the Red Hulk/Wolverine fight, and in retrospect I see some clues to her identity (though they may be subtle enough that they're only obvious after you know the answer.) The fantasy sequence in #609 is well done, ending in the surprise reveal of the Red She-Hulk's identity. Her origin and a long-time character's sacrifice are featured in #610. The big Skaar/Hulk confrontation in #611 has been building for years. Sometimes it's inevitable that nothing can live up to the pent-up expectations, but I'm thrilled to say that's not the case here. It's brilliant and moving. I'm not sure what to make of the "Son of Hulk" backups: at one point it was supposed to be unclear whether he was delusional or whether he really was related to the Hulk but now everyone in the story seems to accept it as fact. (Hiro-Kala also stars in the "Realm of Kings: Son of Hulk" mini, which old-time Hulk and Micronauts fans will enjoy.)

Fall of the Hulks: Red Hulk 1-4: Jeff Parker gets the thankless task of weaving a story from the various (at the time) unexplained backgrounds of the second tier players, but he manages to do it in an emotional and entertaining way. #1 details the background of the Cosmic Hulk robot and reveals some creepy details about how MODOK maintains his misshapen body. #2 is about Thundra and her daughter (and the Hulks) Lyra, which is especially tricky because of the time travel involved, but it shows Lyra's motive for joining in the attack on the FF in Hulk #19. There's also a huge clue to the Red Hulk's identity in #2, which I should have caught the first time around. #3, my favorite of the series, is about Rick Jones' transformation into A-Bomb and his relationship with Banner all the way back to the original Hulk #1 as well as the reason for the Abomination's murder in (Red) Hulk #1. #4 is my least favorite, but I can't go into detail without spoiling the twist at the end.

Fall of the Hulks: Savage She-Hulks 1-3: Another intricately plotted  mini from Jeff Parker, this time revealing who confronted Lyra at the end of Incredible Hulk #605, as well as what the missing Jen Walters has been up from the time of her disappearance to the beginning of World War Hulks. There's also some key evolution in the Red She-Hulks character, but no more clues to her identity. I don't like this as much as the "Red Hulk" mini, and I don't think the art style matches the rest of the books in the line well, but this is pretty good and as a $14.99 trade with the Incredible Hulk #600-605 backups included it's a decent value.

Hulked Out Heroes 1-2: Created to fill a publishing break between the end of "Fall of the Hulks" and the beginning of "World War Hulks", Jeff Parker and Humberto Ramos' story of Hulked-out Deadpol (a.k.a. "Hulkpool") travelling through time is of no consequence to the main arc. Skip it, unless you're a die-hard Deadpool fan.

World War Hulks: Captain America vs. Wolverine 1-2: Even though this seems pretty similar to the "Hulked Out Heroes" concept at first, I liked this a lot better because writer Paul Tobin decided that Wolverine's healing factor makes him more self aware than the other Hulks. This lets him narrate the story, with some good insights about the Hulk's behavior, as well as tell us a good flashback story about Logan and the Winter Soldier. (I don't understand how Cap's bionic arm got Hulked up with the rest of him, but probably best not to think about it too hard.) The Thing/Monica Rambeau fight in the first issue's backup is forgettable, and I can't tell if the dialogue in the Thing/Torch story is supposed to be taken straight or dryly humorous. If it's dry humor, it's hysterical. (Sue: "Reed. Our children are not for experimenting." Reed: "Of course not. One would act as a control.")

World War Hulks: Spider-Man vs. Thor 1-2: Another surprisingly good side story. Similar to the above, Kieron Gillen's take on the heroes seems to be that the Hulk process has brought out their essential inner character (as well as the desire to smash, of course.) Thor wants to "save everything" (Thor: "Thor noble like that") and Spider-Man, punctuated by memories of Uncle Ben, just wants to be left alone to study the natural history museum (Spidey: "Am genius, you know? Just not good at applying it"). There are also some great Loki/Thor/Odin flashbacks -- compare them to Peter and Uncle Ben's relationship -- and a nice bit with the hammer in #2. The Cyclops/Iceman backups by Chris Eliopoulos also are great at contrasting their personalities, flashing back to early X-Men days.

World War Hulks 1: This is an anthology with stories of A-Bomb, Glenn Talbot, the Cosmic Hulk robot (!), Samson, Red She-Hulk and Deadpool (!!). My favorites were the A-Bomb story that light-heartedly deals with Rick and Marlo's relationship and Captain America's flashback to the time the Winter Soldier met Glenn Talbot (is there anyone he didn't meet?), and the Red She-Hulk story that follows up on the scene where she appeared to kill Jen Walters.

Overall, though I had some complaints early on, this whole "Red Hulk" saga turned out to be another successful Marvel long-form story and good show to Jeph Loeb for building on Greg Pak's "Planet Hulk" and "World War Hulk" and leaving the next team a lot of interesting characters to work with.