ALONG THE WESTERN TRAIL, PART TWO

I’ve said this before in my May review of the Free Comic Book Day Edition of THE SIXTH GUN (same contents as Issue #1):  “This has the potential to be a rip-roaring supernatural western equal to the best of Lansdale and Truman’s classic Jonah Hex mini-series.”   If you’re a fan of those books or weird westerns in general you will appreciate THE SIXTH GUN. 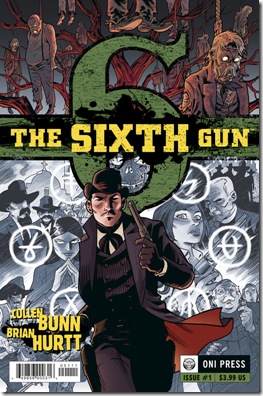 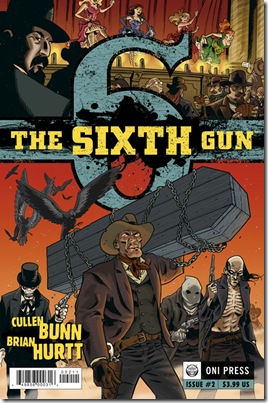 Issue #2 doesn’t disappoint in any way.  The issue centers around events in the classic saloon / hotel/ burlesque   “Silver Palace” and ends up with the place nearly being ripped apart.  Writer Cullen Bunn populates his tale with a goodly number of colorful characters, every one with an interesting and authentic Western-style name.   Speaking of colors,  I’m very happy that Oni Press is now publishing more titles in full color. THE  SIXTH GUN has the richest look I’ve seen on any of their books.  The colors are ideal and well-suited to the narrow panel style that recall the work of Will Eisner.  (That’s the second time I’ve been reminded of Eisner while admiring Brian Hurtt’s art in this book).

One of the more interesting new characters in Issue #2 is Billjohn O’Henry,  a hefty, bearded cigar-smoker described as “bounty hunter, horse thief, gunfighter . . . and card sharp, among other things.”   Billjohn comes to play a major role in the outcome of the chaos soon to erupt in the Silver Palace.    We also meet the demonic-like  General Oilander Bedford Hume, newly risen from his grave and full of piss and vinegar as he swears to destroy any who stand in the way of his re-uniting with his spiritual pistol, the Sixth Gun.   Pity poor Becky (Montcrief?), the current possessor of the gun – now miraculously bonded to her after she made a poor decision and touched it while trying to hide it from the hired minions of Hume.  She’s now bound and captive in the basement of the Silver Palace, held there by Hume’s widow.  The widow Hume just may be one of the undead as well, as investigator Drake Sinclair comes to learn.  What is his link to Hume and his cadre of spooky ghost-riders?    The Pinkerton Agency also makes an appearance. Everybody engages in a huge gunfight at the saloon, including  a huge contingent of zombies.  Silas “Bitter Ridge” Hedgepeth has the unusual ability to call into his service all of his former victims, murdered or shot down in gunfights.

I’ll be back for Issue #3.  You just can’t find westerns like this that easily.